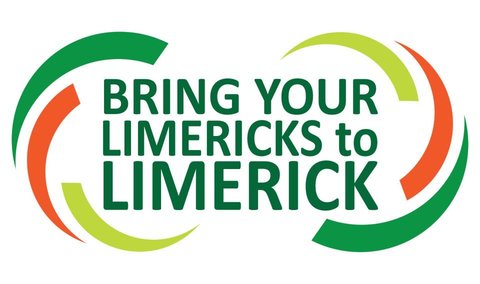 The 2017 Bring your Limericks to Limerick International Poetry Competition expands into a three day festival of literature, arts and culture, and will take place from Friday 25th to Sunday 27th of August, with the final of the now firmly established competition taking place on Saturday 26th August in Dolans on the Dock Road, with first prize for the winning verse is €500.

Lisa Gibbons, appointed festival director this year, said “the hope is to make the competition an integral part of the cultural life of the city and further the aim of making the Limerick verse form synonymous with the city of Limerick”.

The competition was made an international event in 2013 as part of The Gathering celebrations in the University of Limerick and was an enormous success.

Since then over 2,000 entries have been received for the competition, from all over Ireland and the world, with finalists turning up on final nights to do battle for the cash prize fund.

The Limerick is a verse form which originated in Croom, Co Limerick in the 18th century. It is a verse which must contain the following elements:

Five lines
Lines 1,2,5 must rhyme
Lines 3 and 4 must rhyme
A good Limerick will have a clever unanticipated punch line as line 5 will often have puns, runnerword play or a witty feature as part of it.

There will be one winning prize runners up prizes. The winner will receive a prize of €500.

On Friday August 25 to start off the festival at 1pm there will be a unique tour of Croom, home of the historically famous Maigue Poets, a circle of 18th century Gaelic poets in County Limerick. Mayor of Limerick launches the 5th annual Bring Your Limericks to Limerick festival at 5pm. There will also be a book launch of the Curious Story of the Limerick by historian Matthew Potter. At 8pm there will be Poetry Slamming & Traditional Irish Music session. Invited are poets, readers, writers and songsters for a fun night at the Limericks Poetry slam. There will also be traditional Irish musicians on hand to keep the tempo lively.

There will be a variety of exciting and interesting events taking place over the weekend.

The Jack B. Yeats and Paul Henry Summer Symposium on at the Savoy