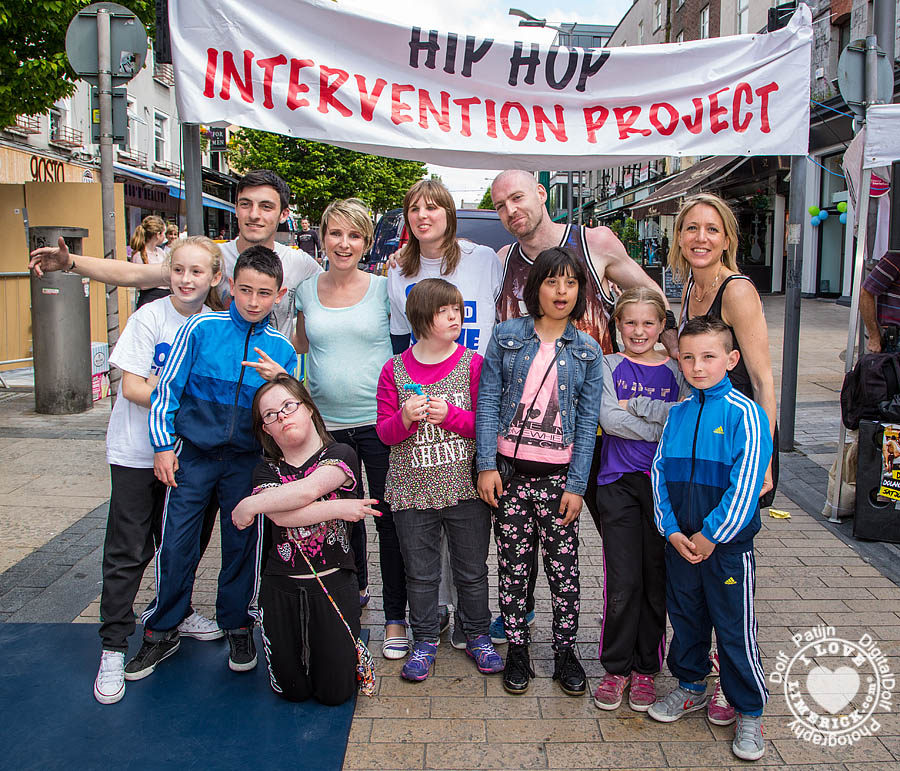 Founders of Limerick Hip Hop Intervention Project Barry Burke & Elizabeth O Mahony (Both back right) with students and youth involved in the project at the Bringing it Back Hip Hop festival. Picture: Dolf Patijn.

On Saturday June 13, Bedford Row in the city centre saw an explosion of hip-hop with the Bringing it Back Hip Hop Festival. Like-minded individuals from all disciplines of hip-hop came together to present a new type of festival. “Bringing it Back” is an attempt to renew the vibe of old-skool hip-hop, giving it a new and modern twist.

The festival is the brainchild of dance legend Barry “Bazzy B” Burke the co-founder of the Make a Move Festival, Limerockers Crew and the Limerick Hip Hop Intervention Project. Limerick Hip Hop Intervention Project was founded by Dr. Elizabeth O’Mahony and Barry Burke 2 years ago and is project that uses dance and hip hop culture to improve social cohesion, mental and physical health in limerick urban youth communities and children with mixed abilities.  The project has been very successful thus far with classes and research taking place all over the city, Ennis and Tipperary Town. There will performances throughout the day with students and youth involved in the project.

Barry came up with the idea for this festival with musician Mexy who composed last years incredible City of Culture show ‘The Tain’, filmmaker Dylan Isaiah and graffiti artist Joe Kennedy. The event kicked off with a free outdoor jam on Bedford Row between 11am-5pm. It had everything from break dancing, rapping, beatboxing, with DJs and live graffiti. Everybody was welcome to come along and enjoy the fun. “Our main goal is to kick-start something that is all inclusive and fun. Hip-hop is a great tool for connecting people from all walks of life. It is an honour to be involved in something like this, with people like Baz who has done so much for Limerick and the kids involved in Limerick Hip Hop Intervention Project, a project to support social integration among youth with mixed abilities co-founded by Dr. Elizabeth O’Mahony, Paediatric Neurologist,” Mexy tells me.  “When we started discussing this event the idea was to build the foundations of a hip-hop festival that travels around the country and brings the crowd along. Events like this are inaccessible to many but are so simple to bring to the people. Limerick has demonstrated support to us over the years through productions like ‘The Tain’ and ‘Make a Move’ that we are thrilled to continue building a hip-hop community in Limerick.”

That evening Ireland’s second ever official beatbox battle bringing beats, booms and bass took place at Dolan’s Warehouse. The International talent of Hobbit (UK), Ball-Zee (UK) and Beatfox (UK) judged Ireland’s hopefuls in their quest to become the undisputed Irish Beatbox Champion and showcased their beatboxing excellence at the end of the night. The first beatbox battle in Ireland at last years “Galway Fringe” festival brought more vocal percussion in the form of gasps from the crowd, and jaws hitting the floor in amazement at the vocal talents of the contenders. This event was not to be missed and ran in Dolan’s from 6pm-11pm.

To wrap up the day’s festivities, Dolan’s hosted the official “Bringing it Back” after-party which saw guest DJ “Jon1st” whip the crowd into a frenzy with his own inimitable style of turntable skills. “Class A’z” and “Icarus Rising” brought the live hip-hop along with local rap celebrities “Weenz” and “Shane Davis”. Belfast’s “DJ Elemental” also be in attendance with an entourage of B-boys and B-Girls. Finally, Limerick’s own “Limerockers Crew” led by Barry “Bazzy B” Burke performed.

For more information on the Irish Beatbox championships, click here

Photos by David Woodland for ILoveLimerick.com 2015. All Rights Reserved.

Could It Be Magic? Take That tour streamed live at ODEON Limerick