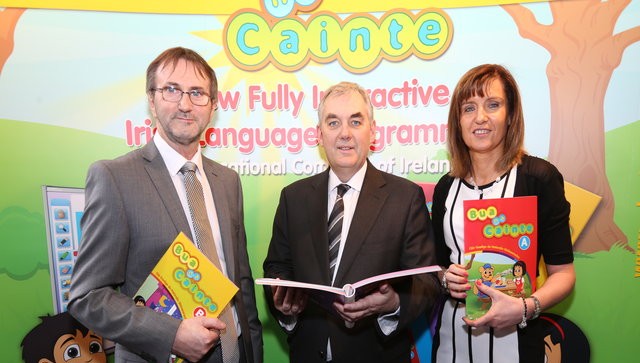 The MIC Bua na Cainte initiative has recently been shortlisted for a National Digital Media Awards, in the Best in Digital Learning category.

Written by MIC lecturers Martina Ní Fhátharta, from Limerick, and Seán de Brún from Killarney, the award winning Bua na Cainte is the only fully interactive Irish language programme, using innovative digital resources, for primary school children in Ireland. This new approach to Irish learning contains child-centric digital activities and games, a comprehensive range of songs, poems and stories to match each theme, interactive daily lessons and animations to bring both the learning and teaching of Irish to life.

No stranger to the awards circuit, MIC Bua na Cainte was awarded the European Language Label of the Year Award 2015 at a ceremony held in Farmleigh House, in September 2015. The judges deemed the programme to be “Excellent with a highly integrated ICT element which uses technology as an effective teaching and learning approach.”

Since its launch in May 2014, MIC Bua na Cainte, published by Educational Company of Ireland, Edco, has grown enormously in popularity. In that short time MIC Bua na Cainte has become the programme of choice for teachers in Primary schools nationwide. Its pioneering approach to teaching Irish has received a phenomenal response from those using it with in excess of 70,000 copies of the Junior Infant to Second class textbooks having been sold. Almost 50% of Primary schools nationwide have adopted the digital technology.

The National Digital Media Awards recognise and celebrate excellence in all aspects of digital media.  Winners will be announced on Friday, February 19, at the awards ceremony in Dublin.

According to Seán de Brún, HoD Language, Literacy, and Mathematics Education in the Faculty of Education, MIC, there is no shortage of reports including the Harris Report and reports from the Department of Education and Skills inspectorate outlining the challenges facing the teaching and learning of Irish in primary schools but there is a paucity of programmes to address these challenges.

Launching the programme Muireann Ní Mhóráin, CEO of An Chomhairle um Oideachas Gaeltachta and Gaelscolaíochta praised the authors for their foresight, initiative and hard work in developing the programme saying,

“Mary Immaculate College with its strong tradition in Irish was the perfect location to launch this revolutionary and innovative initiative by Seán de Brún and Martina Ni Fhátharta.  This programme will ensure that our primary teachers will bestow on the next generation the gift of our native language and the gift of bilingualism”.

Find out more about the initiative here