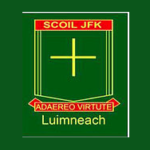 Business Genre:
Schools & Colleges
Short Business Description:
In 1964 the Right Reverend Monsignor Micheal Maloney founded The John F. Kennedy Memorial School. The School is named after the famous American President who visited Ireland in 1963. On the last day of his visit President Kennedy addressed thousands of people in Limerick. Monsignor Moloney was very impressed by him. In November that year President John F. Kennedy was assassinated in Dallas Texas. Monsignor Moloney decided to name the new primary school in his memory.

Many members of the Kennedy family have visited the school in that time including Jean Kennedy Smyth, sister of J.F.K. and in more recent times Rory Kennedy, daughter of Bobby Kennedy and niece of J.F.K.

The John F. Kennedy Memorial School is a Roman Catholic Primary boys school. As such our school aims at promoting the full and harmonious development of all aspects of the pupil; intellectual, physical, cultural, moral and spiritual, including a living relationship with God and with other people.

The school models and promotes a philosophy of life inspired by belief in God and in the life, death and resurrection of Jesus Christ.
The Catholic School provides Religious Education for the pupils in accordance with the doctrines, practices and traditions of the Roman Catholic Church and promotes the formation of the pupils in the Catholic Faith.

Christian values and beliefs are the basis for providing a happy learning and teaching environment. Every effort is made by the teaching staff to nurture the self-esteem of all the children in their care. The intellectual, spiritual, moral, physical, social, aesthetic and academic well being of the children is promoted according to Christian beliefs. Self respect, respect for others, and respect for the environment are of paramount importance and are encouraged at all times. Children are encouraged to work to the best of their ability and are given opportunities to participate in school activities.

The school is a very important institution in the community and every effort is made to encourage involvement by the community in school activities and to give the children a sense of participation in their immediate environment. This understanding will further ensure that children acquire an appreciation of their Local, National and European heritage and identity.