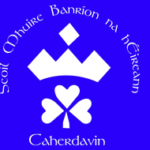 Their school began in 1968 in a prefab building. At that time there were 30 boys and 30 girls and had only one teacher. (We must remember that Caherdavin was quite a new housing estate and had only become a parish around this time). In the beginning, it was part of the Holy Rosary Parish and the first Principal was also the Principal of Fernbank Salesian School.

In 1969 another teacher was added because of the increasing population and in 1970 Sr.Brigid Kennedy became the first Principal and Fr.Brown the Manager. At this stage it was known as Christ the King School.

In March 1971 two permanent schools were built, one for the girls and the other for the boys. While these were being built they had school in Na Piarsaigh GAA Clubhouse.

At this stage the school was divided and in July 1973 our school was re-named MARY QUEEN OF IRELAND G.N.S. and the boys' was named CHRIST THE KING B. N.S.

Due to the increasing number of houses being built, the school continued yearly to expand reaching a peak in 1980 with 633 girls on roll.

During the 2010/11 school year they decided it was time to celebrate their 40th anniversary. They sourced some funding from 'The Salesian sisters Trust Fund' and then they were in a position to host a spectacular show in the Millennium Theatre in Limerick. On December 20th & 21st 2011. Their 'Ruby Extravaganza' was a huge success where each and every one of our 294 pupils participated in the show.

The school was opened in 1970 and during this time has educated thousands of girls. Each girl spent her formative years in the Salesian Ethos and indeed many have told us that they have carried this ethos on to their later careers.