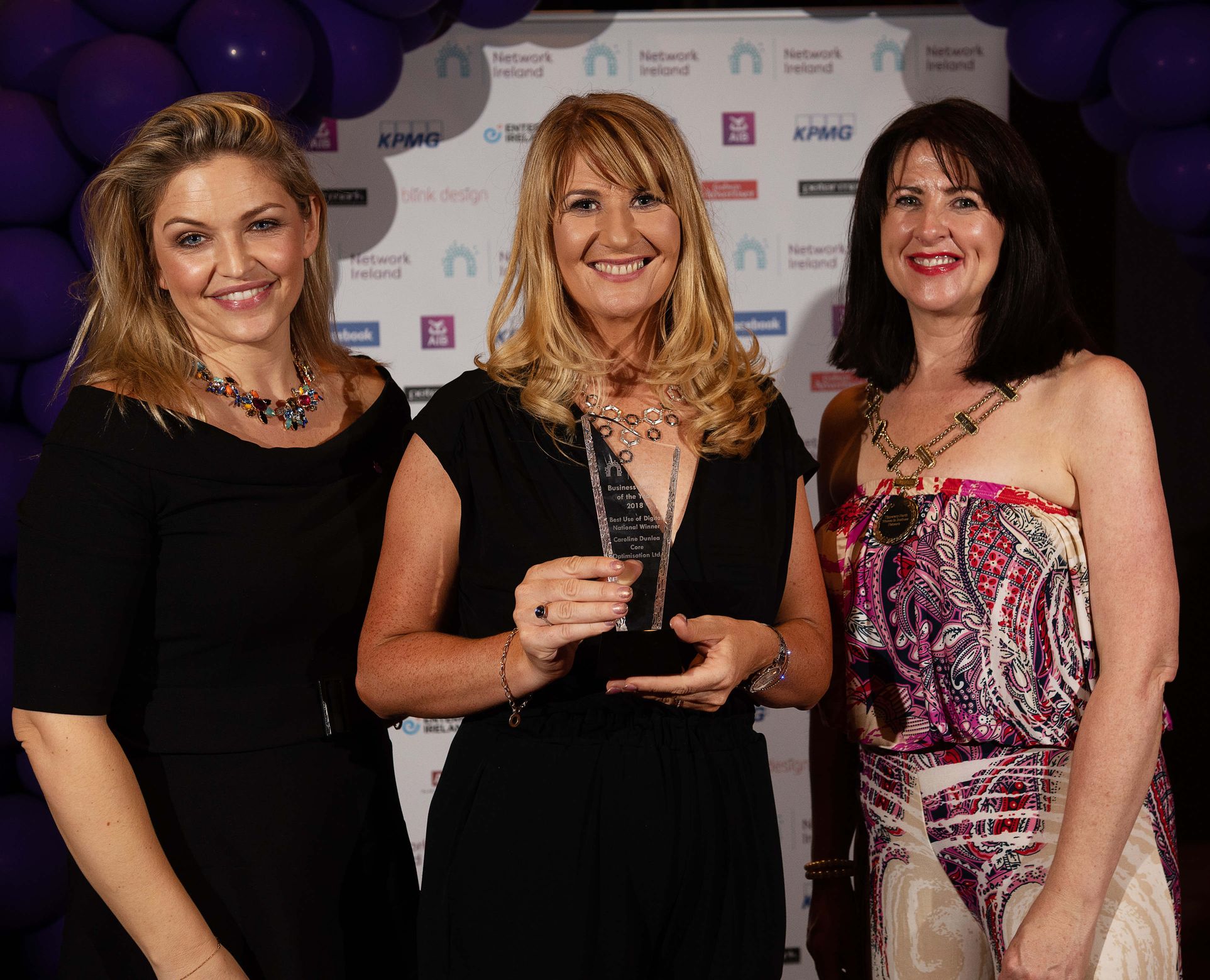 Caroline Dunlea, co-director of Core Optimisation, won the Best Use of Digital Award at the Network Ireland Businesswoman of the Year Awards 2018 which were announced on Friday night at a gala dinner in The Galmont Hotel & Spa, Galway. The annual awards celebrate the excellence, professionalism, vision and leadership of businesswomen in Ireland.

Rosanne McDonnell, Art Business Summit, was highly commended in her category, Arts Business Owner, which was sponsored by Blink Design.

At the Network Ireland Businesswoman of the Year Awards 2018, Roseann Heavey, president of Network Ireland presented The Trish Murphy Memorial Award to Vicky Phelan for her outstanding contribution to women in Ireland

This year saw a record number of entries for the awards from Network Ireland’s 15 branches across the country.  Other winners announced on the night were: Irene Twohig, owner of Educogym, Cork won the award for Large SME, sponsored by AIB. Laura Jayne Halton, Couture Designer, won the Arts Award sponsored by Blink Design while the Emerging New Business Award, sponsored by KPMG, went to Caroline Murphy of West Cork Eggs. Laura Maher of Reilly’s Supervalu Sallins was awarded Employee of the Year sponsored by Peter Mark and Geraldine Jones of Mediskin took home the award for Best Small SME, sponsored by Alastair Purdy & Co. Solicitors.

Speaking about the Awards, Roseann Heavey, President of Network Ireland 2018 and Partner with Noone Casey said: “It was an honour to host the 11th Annual Network Ireland Businesswomen of the Year Awards 2018 in Galway this year. Our membership is growing which was reflected in the record number of awards entries this year. The independent panel of judges all agreed that there were some phenomenal submissions and the competition was very tough. It’s great to see our members being rewarded for their extraordinary achievements.”

Also awarded on the night was the Network Ireland 2018 Trish Murphy Memorial Award for Outstanding Contribution, traditionally conferred by the President of Network Ireland to an Irish Woman of their choosing for an outstanding contribution to society, This year’s nominee was Limerick woman Vicky Phelan.

Speaking about the nomination, Roseann said “When it came to a decision about who to award the Outstanding Contribution Award to, I didn’t have to think too long. Vicky Phelan is an inspiration to us all. Despite everything she has had to face, she has never given up, she is incredibly resilient. She has empowered other women, she continues to support other women and is an articulate voice for women who don’t have a voice. She is the embodiment of what Network Ireland stands for.”

Related Topics:National Business Woman of the Year Awards
Up Next