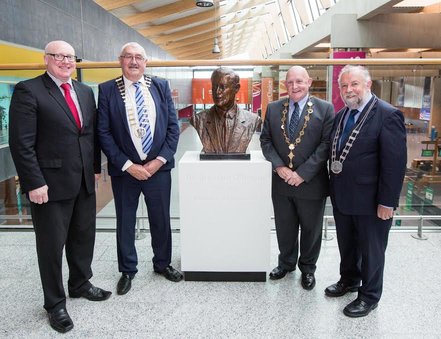 A contribution to balanced regional development unrivalled by any one person was marked today on the 100th anniversary of the birth of one of Ireland’s greatest economic innovators, the late Brendan O’Regan.

The man essentially credited with spearheading a new era of economic development in Ireland was celebrated with the unveiling of a bust at Shannon Airport. Brendan O’Regan was the founding father and builder of the foundations on which much of Shannon, the Mid-West region and Ireland’s economies were built, and his many world first initiatives continue to bear fruit today.

The wellspring for many of his unrivalled flow of industrial and tourism initiatives, among them the creation of Duty-Free Shopping, are today multi-billion euro global phenomena.

The legendary visionary, a native of Sixmilebridge, Co. Clare, is justly credited with transforming the Mid-West from a region caught in the grip of a desolate post-war depression in the 1940s/’50s into a thriving hub of economic activity.

He was head-hunted in the early 1940’s to take over as Catering Comptroller at Foynes flying boat base, the premier transatlantic aviation gateway into Europe at that time. In 1945 he transferred to the new Rineanna Airport (later renamed Shannon Airport) in the same role, where he set about single-handedly influencing, more than any other person, the future course of economic development in the western half of the island.

Among the initiatives spearheaded by one of Ireland’s most visionary public servants are:
·Developing the world’s first duty-free shop at Shannon Airport, a concept way ahead of its time in the aviation world, and quickly replicated in airports across the globe.

·Developing the Shannon Free Zone, the world’s first Free Trade Zone, which today is Ireland’s biggest multi-sectoral business park, employing over 7,000 people in over 130 companies and housing the country’s largest cluster of FDI investment outside of Dublin.  Shannon Free Zone was used as the model for the world’s first Special Economic Zones (SEZ) in China and the world over. Today there are approximately 2,600 Free Zones globally employing upwards of 60 million people.

·Developing the now world renowned Shannon College of Hotel Management – graduates of the internationally acclaimed college include some of the world’s top hoteliers.

·Transforming Bunratty Castle into one of the country’s leading tourist attractions. This was followed by similar initiatives at Knappogue and Dunguaire castles, ultimately giving rise to Shannon Heritage – Ireland’s largest operator of tourist attractions with sites in Clare, Galway, Limerick and Dublin.

The bust was unveiled by Shannon Group Chairman Rose Hynes and among those in attendance were members of Dr O’Regan’s family, Cathaoirleach of Clare County Council Bill Chambers, Mayor of Ennis, Cllr Ann Norton, and former colleagues. Members of the Bunratty Castle Entertainers gave a special performance at the event in acknowledgement of his immense contribution to Irish tourism.

Addressing the large attendance, Ms Hynes said: “Brendan O’Regan was one of the most fascinating and influential people of our time. A renaissance man, a pioneer of regional development, charismatic and charming – who brought a passion and determination to every task he undertook.

“He rarely took “NO” for an answer and he was very driven in pursuit of his projects. He wasn’t afraid to think big. His initials “BOR” – in Shannon came to mean ‘Bash on Regardless’. He saw opportunities, not limitations and his ability to reach for the skies had a transformative effect on this region and beyond. He firmly believed in following your dreams and never giving up on an idea.”

Said Shannon Group CEO Matthew Thomas:  “So much of what is vibrant and good in economic and social terms in the Shannon region and beyond today – is a lasting tribute to Brendan O’Regan an innovator, entrepreneur and, ultimately, a great man.

“I’ve worked in the aviation industry globally over twenty years now and Dr O’Regan’s legacy is remarkable in an international context.  He was a true altruistic visionary. This, together with the incredible world impacting initiatives he developed, set him apart.  We all carry a huge responsibility to his legacy.  We owe it to him to continue to reach higher than we think possible and to constantly try to be the best at what we do.”

Perhaps one of Dr O’Regan’s great leadership qualities was his belief that everyone had the capacity to be creative and the inclusive environment he created for his staff was key in the rapid progress made and the range of innovations achieved. He firmly believed in following your dreams and never giving up on an idea. He once said: “If you’re involved in developing an important idea, you have to let it possess you. If you keep knocking on the door, the door will open. You’ll get there, not particularly with your own abilities, but with others that you gather around you.”