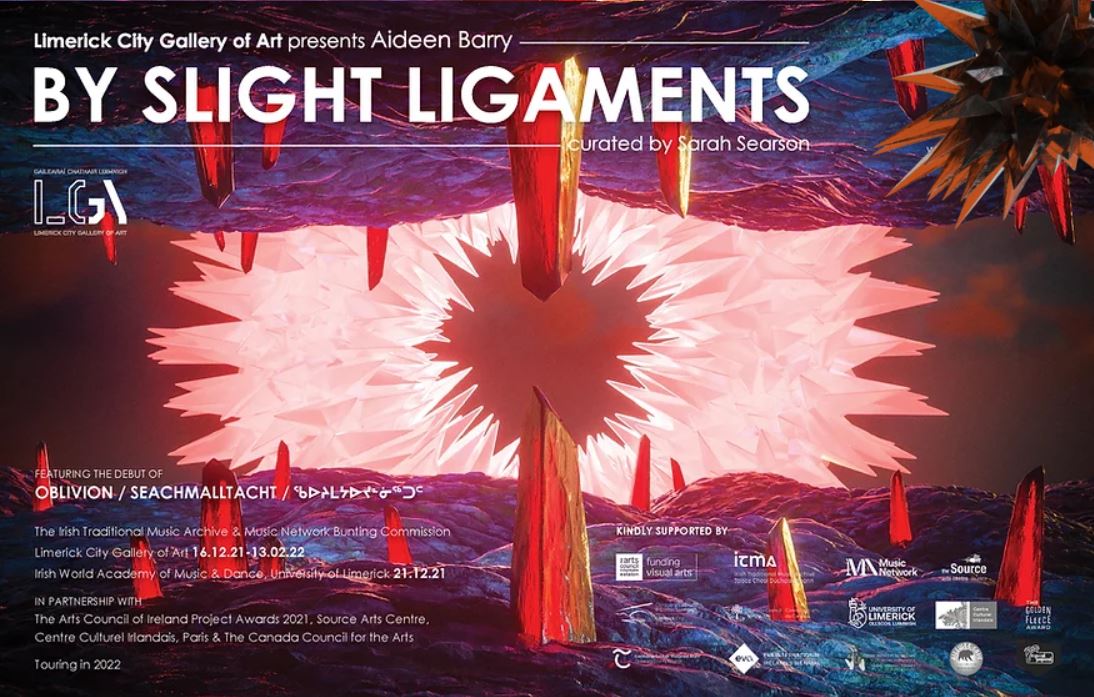 By Slight Ligaments by Aideen Barry is coming to the Limerick City Gallery of Art on Thursday, December 16

Aideen is a visual artist from Cork whose work has been shown in a number of museums, private galleries, and centers of contemporary art

The Limerick City Gallery of Art (LCGA) is delighted to announce that Aideen Barry’s solo exhibition, ‘By Slight Ligaments,’ her most ambitious exhibition to date and the culmination of several years’ work, will be available to view from Thursday, December 16, to Sunday, February 13.

The show is curated by Sarah Searson, one of Ireland’s leading independent curators.

While the title of the exhibition may not be instantly recognisable, it is taken from Mary Shelly’s novel, Frankenstein. The show was named ‘By Slight Ligaments’ to emphasize the various spaces in LCGA as a body of parts, stitched together through the collective talents of Aideen and her many collaborators, such as writer Sinead Gleeson, and composer and musicians Fiona Shiel, Stephen Shannon and Cathal Murphy.

The works take over the various spaces in the Gallery, implying to our intense human vulnerability and disconnection as a society dealing with post-pandemic realities and environmental changes.

Throughout the exhibition, expect sound and imagery to overwhelm you, play with your sense, to mark out connection, dislocation and our bodies in a changing world.

QR codes will be present throughout the gallery, which will lead to pop-up videos that will give the viewer some background or context to some of the works in the exhibition.

By working across multiple sites of research, such as the Bunting Harp Collective archives, and with the Irish Traditional Music Archive and Music Network, the exhibition refers to a collective state of denial, questioning a public’s aversion to acknowledging crisis, its impact and role in changing socio-political cultures, and widening global inequality.

https://t.co/KLe8Fj5PrI have been working solidly for 2 years on this project. Here is a little video about it to introduce you all to ᖃᐅᔨᒪᔭᐅᔪᓐᓃᖅᑐᑦ SEACHMALLTACHT OBLIVION which has been an enormous monster that will manifest in a few different forms/( 1/8)

A catalogue in the form of a vinyl record will be produced to celebrate the show in 2022 and will feature an essay in the form of sound work by Sinéad Gleeson and Stephen Shannon. The catalogue is designed by Oonagh Young and HQ Design, and produced by the Limerick City Gallery of Art, Source Arts Centre and Centre Culturel Irlandis.

Works in the exhibition have been supported through the generous support of the Arts Council Ireland Project Awards 2021.

By Slight Ligaments will tour the Source Arts Centre in Thurles in March 2022, and then onwards to Paris to the Centre Culturel Irlandis in September 2022, with further international partners bringing it to North America in 2023.

While time slots for the limited Preview Tour of the exhibition on Thursday, December 16, are fully booked, names can be added to a standby cancellation list where applicants will be notified if a slot becomes available.

To book tickets for the Preview Tour go HERE