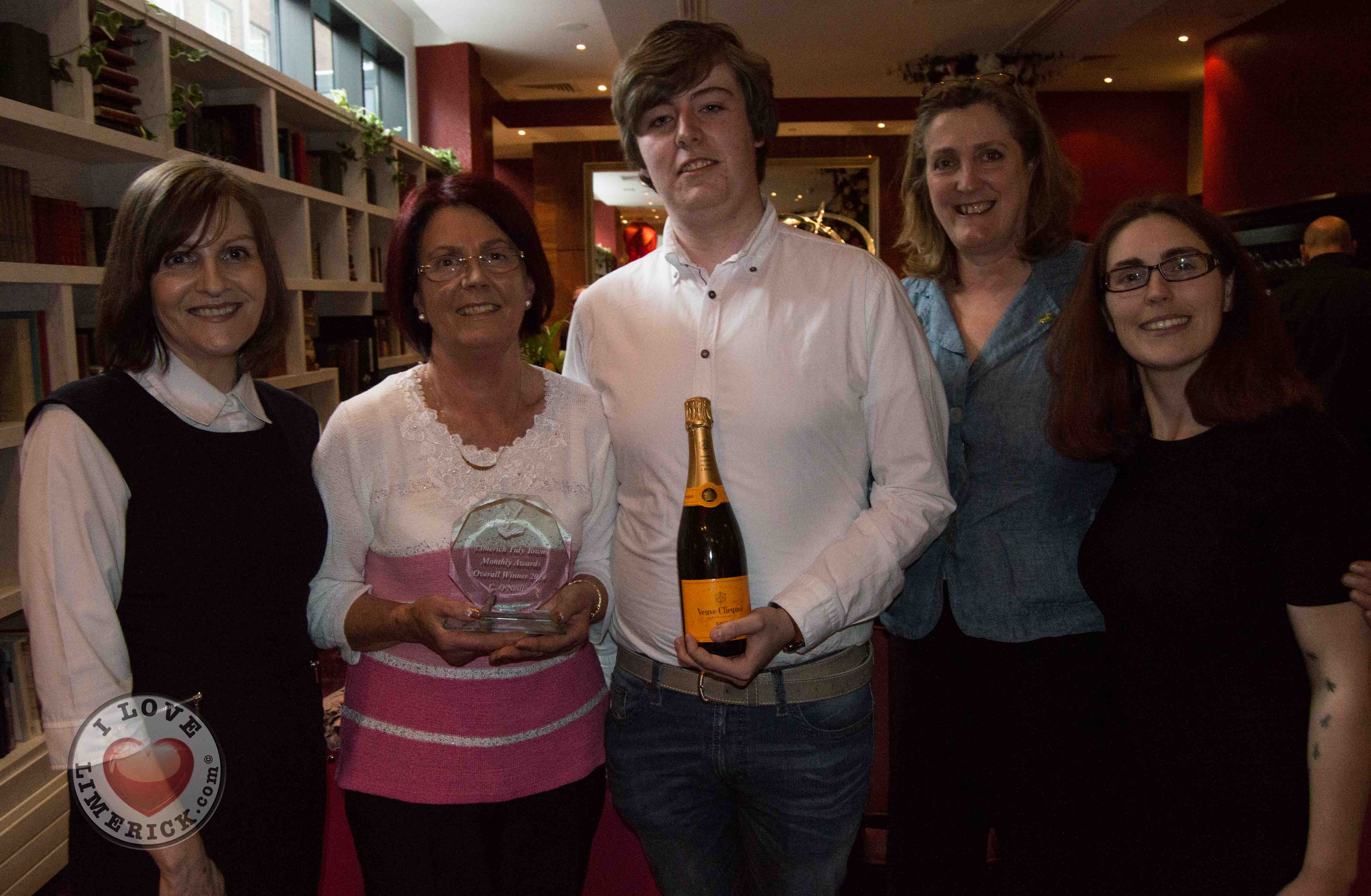 Pictured above is the Tidy Towns Committee with the overall Limerick Tidy Towns winners of 2014, C O’ Neil Fruit and Veg Shop. Picture by Billy Butler.

There was a great turnout of past monthly award winners and Tidy Towns volunteers at The Savoy Hotel on Tuesday evening to recognise each of the winners once again and also announce the overall winner for 2014, which is C O Neill Fruit & Veg Shop on Upper William Street.

Miriam O’ Neill from C O’ Neil said “I was shocked and surprised to be announced the overall winner. I didn’t do anything out the ordinary and I am just delighted to have won it”

As Maura from Limerick Tidy Towns explained “The reason we started our monthly awards was firstly to acknowledge the special effort we felt was being made by so many people in the city in keeping their own properties looking great who we came across during our twice weekly clean-ups. So often we used to pass by and comment on the same places again and again, that we eventually thought “Why not tell them!” So we did!”

The awards also gave Limerick Tidy Towns the opportunity to highlight specific types of properties that they wanted to show as an example of just what can be achieved when the effort is put in.

Helen O’Donnell from the Tidy Towns Committee said “Tidy Towns has been running for four years now and it encourages businesses and retailers to take control of the litter that is outside their shop front, making a much better environment in the city.”

They wanted a varied choice from different locations around the city, so for example chose The Copper Room in April for the basement element to show just what incredible potential so many of the city’s neglected basements have, and similarly Tom Collins in October for showing just how pretty a back street alleyway can look with a bit of TLC. Again, the award in March went to Frances Twomey’s Solicitors offices as a perfect example of just how impressive Limerick’s wonderful Georgian buildings can look when maintained so lovingly.

Another award, in fact their first way back in January 2014, went to the wonderfully eclectic Lucky Lane on Catherine Street, for completely transforming what was a rundown lane-way and also for selling recycled and second hand goods, which is very much in keeping with the sustainability element of the Tidy Towns ethos.

Other awards went not necessarily to premises alone but to individuals who Limerick Tidy Towns felt deserved recognition for their hard work. For example the staff of Chicken Hut who won the award back in February 2014, as the Tidy Towns team rarely passed during their clean ups without seeing a member of staff outside with a sweeping brush or a cloth. Also Fergusons who won the award in August were chosen as they had been so generous in allowing their vacant premises at the corner of O’Connell Street and Thomas Street to be used by Limerick Tidy Towns to display their Georgian Doors paintings project for the City of Culture, while at the same time showing that vacant premises don’t have to be simply left to stand idly by, but can be of benefit to the community.

St Joseph’s Church Gardens were chosen in May not only as a fine example of a beautiful urban garden but to recognise the work that goes in by all the community there in keeping it so, particularly the members of the South Limerick Residents Association – a combined award to property and people.

A great addition to the Limerick streetscape, especially in an area that needed that shot in the arm, Hook and Ladder were chosen in June as quite simply, you could not get a finer example of the potential so many of our fine old neglected buildings have to revitalise an area when renovated to such a high standard.

Limerick looked so beautiful at Christmastime that the December award was given to the city in general, which means the final official award of 2014 went to Kleiser’s Pianos in November, a beautifully maintained old Limerick shop which has stood the test of time as they wanted to show that while it is important to embrace and encourage the new, it is also vital to maintain and be proud of our traditional buildings and shop frontages.

Not only was the property looking great, but Miriam’s enthusiasm for keeping it so was clear for all to see and the three of us who chatted with her that evening were all unanimous in deciding that they definitely deserved the September Award, and ultimately as it turned out the overall award for 2014, and we couldn’t have more deserving winners”.

Photos by Billy Butler for I Love Limerick 2015. All Rights Reserved.