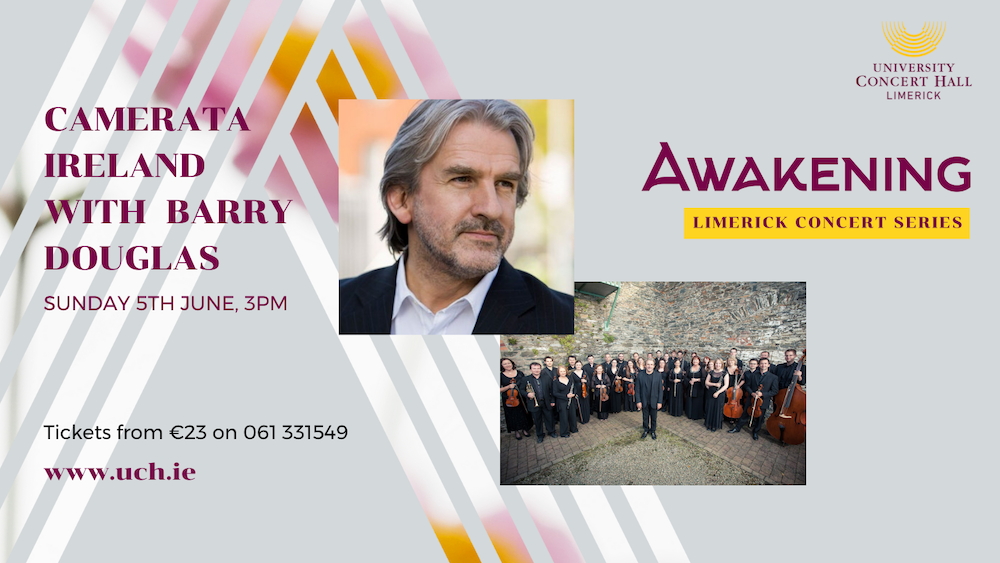 Barry Douglas established Camerata Ireland in 1999, with the aim of creating an Irish chamber orchestra of excellence

International renowned pianist, Barry Douglas, and Camerata Ireland, a chamber orchestra with some of the finest musicians across the country, will perform the final performance of University Concert Hall’s (UCH) Awakening Limerick Concert Series on Sunday, June 5th at 3pm. This concert will be presented by Liz Nolan of Lyric FM.

Barry Douglas established Camerata Ireland in 1999, with the aim of creating a chamber orchestra of excellence from the island of Ireland to match the best in the world. Camerata Ireland brings together the finest Irish musicians and it has given performances throughout the USA, Europe, South America and Asia.

Significant achievements include performing at the 2006 International Beethoven Festival in Warsaw, the Smithsonian Festival in the US Library of Congress, the Naantali International Festival in Finland in 2007, the Festival de la Chaise-Dieu in France in 2008 and 2009, their Carnegie Hall debut in 2011, the BBC Proms at Cadogan Hall in summer 2013, and the 40th Anniversary Kilkenny Arts Festival. In May 2011 the orchestra was honoured to be invited to perform for the (former) President of Ireland, Mary McAleese and Her Majesty the Queen, as part of the latter’s historic State visit to Ireland. Highlights of 2015 included a tour of South America taking in Buenos Aires, Rosario, Cordoba, Santiago de Chile and Sao Paulo and a tour of China, with appearances in Guangzhou, Yichun, Beijing, Wuhan and Shanghai.

Camerata Ireland has recorded the complete Beethoven Piano Concertos and the Triple Concerto. All of Camerata Ireland’s recordings have met with great critical acclaim.

‘There is an extra special quality to Irish string playing which comes from the roots of Irish tradition’ says Barry. ‘I knew that if I could bring the best Irish players together something special would result – and I have not been disappointed’.

In recognition of the exceptional nature and quality of its work, Camerata Ireland was awarded the Joint Patronage of Mary McAleese, President of Ireland and Her Majesty Queen Elizabeth II in 2004.

Awakening Limerick Concert Series is UCH’s annual three-part concert series, which is in its second year and has welcomed much loved Irish classical performers including John O’Conor and The ABL Aviation Studio.

Beethoven – Piano Concerto No 2 in B flat

Mozart – Symphony No 40 in G minor

Tickets start from €23 and are available HERE

For other stories on University Concert Hall, go HERE