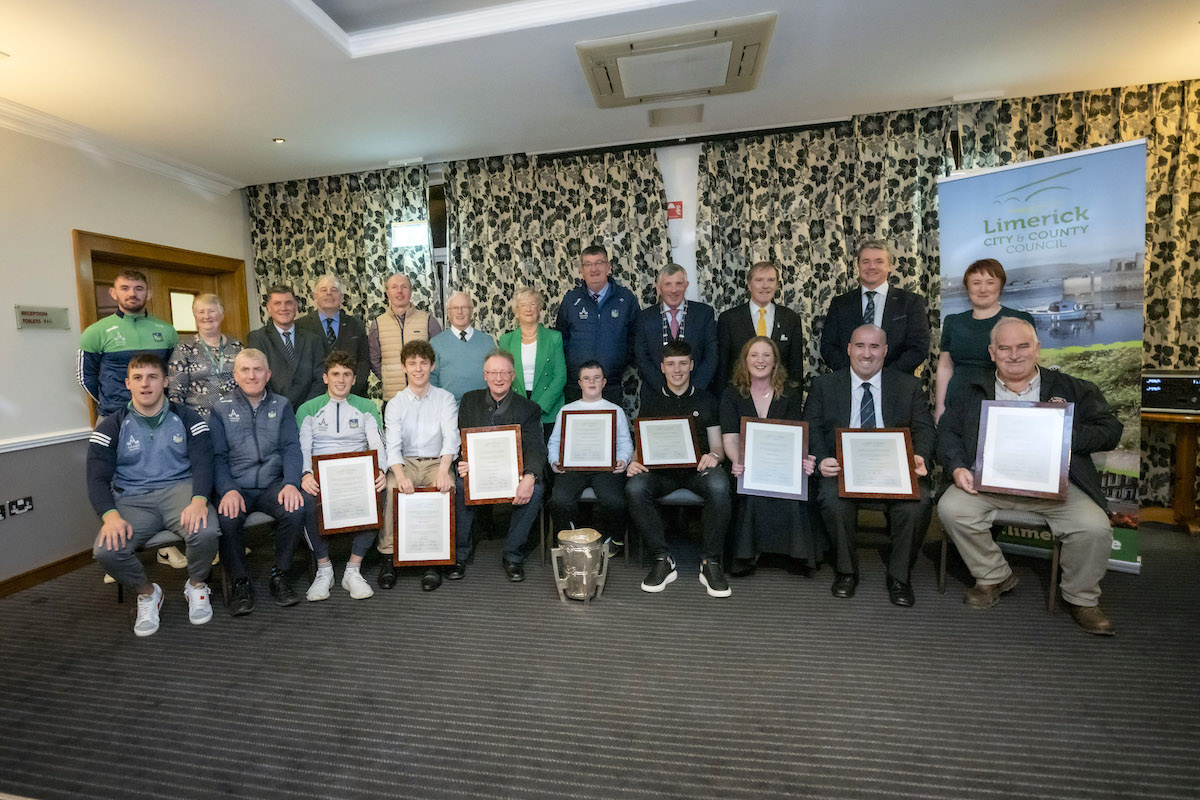 On the night itself, an Cathaoirleach, John Egan, made his introductory remarks on the purpose of the event, the Cappamore Kilmallock Municipal District as a whole and the reasoning behind recognising the recipients on the night.

The Cappamore Kilmallock Municipal District stretches from the Slieve Felim Mountains to the Ballyhoura Mountains, and has a strong sense of history, culture and sport, boasting the Clare Glens, Lough Gur, and much more.

“Due to Covid 19, the Elected Members have not been in a position to host such an event since 2019, and therefore it was with great pride that we are gathering again to acknowledge what has been achieved over the past couple of years in such difficult times.” Cathaoirleach Egan added.

Limerick City and County Council’s Meetings Administrator Dara O’Brien, introduced each of the recipients and invited them to receive their scroll, presented by the Cathaoirleach.

Each recipient made a brief thank you speech to the attendees.  John Cregan and John Kiely spoke on behalf of the members of the Limerick Hurling Backroom team and panel from the district.

Lynda Sheehan outlined the importance of supporting local businesses and the impact this can have on the local economy while Robert Ryan outlined his current exhibits and invited people to view them, with an upcoming exhibit to be held in the Limerick Museum.

Shane Ryan described his arduous 53 day journey rowing across the South Atlantic, encountering a shark attack along the way which damaged their rudder.

The evening was concluded by closing remarks from an Cathaoirleach congratulating everyone on their achievements.

Shane and international rowing crew of 5 others, departed Portugal on 4th March 2020, and encountered numerous obstacles during the arduous 53-day sea journey, including problems with solar-powered batteries, satellite system failure and a destroyed rudder following a frightening shark attack.
On completing the historic journey, Shane and his crew safely docked in Cayenne, French Guiana.

This journey was undertaken to raise awareness of and funds for Vision Sports Ireland, the governing body for sport and leisure opportunities for people who are blind or vision impaired in Ireland.

The winner of the Gold at Blas Na hEireann, the Irish Food awards.

Established in 2006. Ballyhoura Apple farm and Vinegar Vault is based in Kilfinane.   Originally based in Churchtown, the orchard and headquarters moved to Kilfinane in 2014, transporting over 4000 apple trees. Products such as  juice, chai, apple cider vinegar and more are produced and sold through their centre in Ballyhoura Artisan Food park.  Maurice has also been successful in achieving awards at the Mitchelstown food fair, BBC Good Food Show, and Taste of Dublin.

The youngest of our recipients, Paudie O’Callaghan, from Knockainey, has achieved a lot in his 11 years. Offering a regular Paudcast providing tips and advise on how to stay positive during Covid Pandemic, Paudie has also appeared on the Late Late Toy show, won Limerick Person of the Year, and Received Leading Irelands future together award.
Paudie has also appeared on Nationwide, and has supported the Special Olympics Ireland Can’t Stop Now campaign.

Winner of UCI Junior Mountain Bike World Championships which were held in Austria in October 2020 and RTÉ Sport Young Sportsperson of the Year.

Growing up at the foothill of the Ballyhoura Mountains, Oisin has been cycling from a young age. Over a 2.3 km course approaching speeds of 65km per hour, Oisin was the first Irish person to win the Downhill Junior world title at the Mountain Bike Championships.

Ben Coughlan from Galbally, won a 5000m race in the Fontenay-Sous-Bois in Paris on the 17th Oct 2021 in a time of 15.48.  He also was a Silver Medalist in this year’s Dublin Track Championships on 15th June  2022, and in October took bronze in a Cross Country Novice Event.

Ben started self training 3 years ago at the age of 19, and competes in Cross Country, Track and Road racing, currently running 50 miles per week.  He trained with the Moreabbey Milers until early this year when he joined Clonliffe Athletic Club.

Ben is currently in his 4th year of study in Trinity College Dublin, studying Law, as well as training and working part time. This dedication and motivation is evident in the results he has achieved in his sport, and we wish him the same success in his studies in the future.

Winners of 10 all Ireland finals, starting in 1897, the Limerick Hurling Team have proved their determination, strength and talent in winning 4 All Ireland Hurling Championships in 5 years, including 3 in a row from 2020-2022.  No other Limerick Hurling team has achieved such success, with the nearest accomplishment being 3 wins in the 1930s (1934/36 and 40).

This Limerick Team also had to face the challenge of training and playing during lockdown and the disruption of Covid 19.

This evening we would like to recognise the contribution of the Galbally based Manager, John Kiely, and all of the backroom team and panel members from the Cappamore Kilmallock Municipal District towards this success.

The winner of the National Solo Business Woman Award 2021 from Network Ireland.  Lynda Sheehan, owner of the Rockbarton Garden Centre at Holycross, Bruff, and winner of the Business Innovation accolade in the Network Limerick Businesswoman of The Year Awards 2020.

Rockbarton Garden Centre is a family run business, based in an 18th Century courtyard, which as well as selling a variety of produce/plants for your garden, also provides a consultation service, classes for all ages, operates a regular market and has recently opened a café.

Robert graduated from Limerick School of Art and Design in 1987 and has worked in Copenhagen and London.

An interest in zoology and travel has hugely informed Robert’s work.  He has travelled widely, visiting over sixty countries on all continents where he has encountered many different eco-systems, experiencing first-hand how all living things interact and how they respond to their environment.  This knowledge forms a major part of the work.

Based in Lough Gur, Robert’s works are currently exhibited online and in the Gormleys Art Gallery, Dublin.  Previous exhibits have taken place in galleries across Ireland, London, Barcelona, China, Australia, Copenhagen and more.

Find out more info on the Cappamore Kilmallock Municipal District