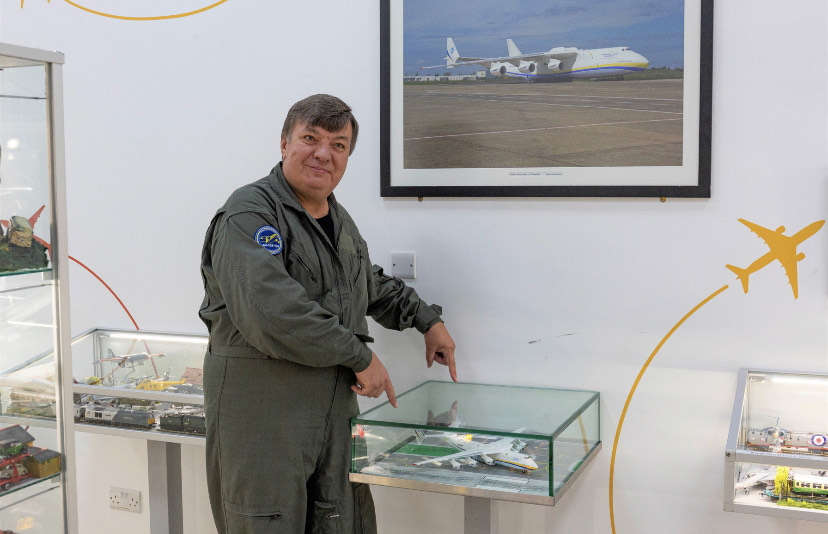 Captain Dmytro Antonov and the AN-225 have a long-standing history of flying into Shannon over the last 20 years.

Captain Dmytro Antonov, the Chief pilot for Antonov Airlines, spent time visiting the world’s largest collection of diecast model planes after recently flying into Shannon on the Antonov AN 124.

Captain Dmytro’s reason was a poignant one. He wanted to view a rare scale model of the largest plane ever built, the Antonov AN-225, an aircraft that Dmytro captained for many years.

The 1– 200 scale model, which is one of only a few models of its kind in the world, is made from carbon fibre and measures approximately 14 by 14 inches. To put into perspective, it would take 125,172 models AN-225s on 57 stacking levels to fill the cargo hold alone of gigantic aircraft.

Both Captain Dmytro Antonov and the AN-225 have a long-standing history of flying into Shannon over the last 20 years, due to the airport’s capability of accommodating the cargo plane on its runway, which is the longest runway in Ireland.

The 620-tonne aircraft played a key role during the global pandemic, as it was used to transport vital PPE equipment all over the world. On June 10 2020, it arrived at Shannon, carrying the largest consignment of Personal Protective Equipment (PPE) to be flown into Ireland on a single flight.

In October 2021, the AN-225, known as the ‘Mriya’, the Ukrainian word for dream, touched down at Shannon Airport for the last time before it was destroyed at Hostomel Airfield, outside of Kyiv, during the conflict in February 2022.

Michael Kelly, who donated his life’s collection of model aircraft to be permanently displayed at Shannon Airport said, “I am delighted Captain Dmytro got to see this exhibit here in Shannon. He has been the face of Antonov and has flown the entire range of the company’s airplanes, including the AN-124, which now holds the title of the world’s heaviest aircraft since the AN 225 was destroyed.

“When I was asked by Shannon’s team to help them source a scale model of this incredible aircraft, I made it my mission, and we got there in the end.

“It’s incredible that Shannon owns this rare collector’s item. You could travel the world to get a “gear down” 1-200 scale model of the AN 225, and still not find one available – they are like gold dust. I was lucky to get this model sent over from Holland to become part of the collection here. It’s a fantastic display in homage to the AN 225, and well done to the team for installing it.”

Mary Considine CEO of The Shannon Airport Group, said: “It was an honour to have Dmytro visit our aviation gallery to see the new Mriya exhibit on display and we would like to thank Michael for all his work in finding this rare model.”

Shannon Airport Aviation Gallery, which opened in the departures lounge of the airport in 2018, houses over 1,500 plus specialist diecast models, carefully collected over 50 years by the Limerick native.

It includes every popular aircraft to have flown as well as many lesser known, right up to modern-day versions.

Among the better-known is a range of Concordes that perfected take-off ability at Shannon, the Sunderland aircraft owned by Al Capone from the 1930s and the McDonnell Douglas DC6 – the oldest aircraft replicated in the collection.

The six-storey-high, Ukrainian-built Antonov AN-225 was the only one of its kind. It had a wingspan of 88 metres, 32 wheels and could carry 640,000 tonnes on take-off.

The Antonov AN-225 was the biggest commercial cargo aircraft in the world.

It was manufactured in 1988 for the Russian Space Programme. Its first flight was on December 21st, 1988. It stood over six stories high and was comprised 7 million pounds of metal. The Antonov broke 109 world records within months of its first flight. The wingspan of the plane was the width of Croke Park, with the length being 84 meters and weighing 640 tonnes.