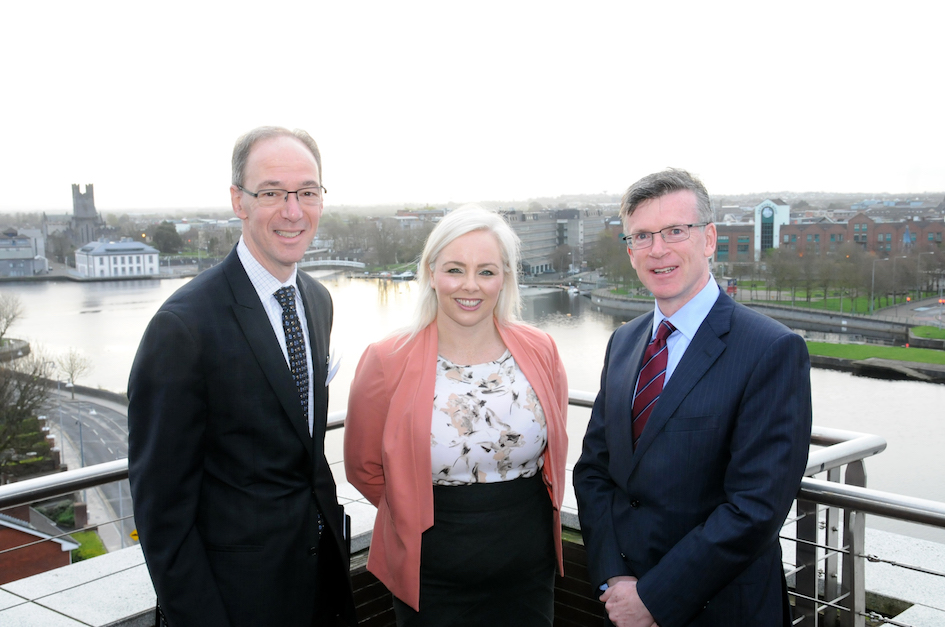 Leading global economist, Carl Tannenbaum, has advised the Irish government to avoid the political temptation of a give-away budget and to save any excess in the nation’s finances for the next recession.

The comments of Chief Economist for financial services company Northern Trust Carl Tannenbaum at Limerick Chambers event, held in collaboration with Limerick City and County Council, were also endorsed by one of Ireland’s most experienced economists, Dr. Alan Ahearne, who warned of a potential return to problems caused in the last decade if government overspends.

The two gave their expert outlook at the Limerick Chamber Economic Briefing Breakfast at the Strand Hotel in the city with the Northern Trust economist also predicting that Ireland will withstand the significant reduction to US corporate tax.

“The recovery has been remarkable considering that Ireland just emerged from its agreement with the international financial authorities in 2013,” the Northern Trust economist stated.  “The point now where unemployment is at 6 percent, the budget is in surplus and we’re thinking forward in the way that we are, it’s really been quite a remarkable turnaround. When times are bad, governments need the ability to spend a little bit more. But times are good.  It’s much better to bank the excess because someday there will be another recession.

“The political temptation always is, if there is a nickel in the till, let’s go ahead and spend it because it curries favour with the voters. But politicians should be looking longer term.”

Dr. Ahearne, a former special adviser at the Department of Finance here and one-time Senior Economist with the US Federal Reserve, said that notwithstanding concerns about Brexit, the key indicators are that we will not need to boost spending.  “Does the Irish economy need a boost from a big ramp up in government spending? The answer, almost surely, is it does not because the economy is doing fine all by itself.  Interest rates are low. Our global neighbours, with which we trade a lot, are growing.  There’s a virtual circle with increase in consumer spending and household income in Ireland. So we’re growing at a really good clip. Unemployment is falling, creating lots of jobs.

“We don’t need an extra boost from government spending so it means the government needs to be careful and prudent in its next budget.”

“If the economy overheats, that is there’s too much spending in the economy, we’re going to start seeing stuff that we saw back in 2006 and 2007, with congestion in cities. It’s going to continue to push up prices and we might see wage increases faster than the rate of productivity.  And that would mean that although people getting more wages is good, if wage increases are too much, we lose international competitiveness.

“If there was some sort of very negative shock to the economy then in a few years’ time, let’s say in 2021 or ‘22 coming from Brexit or from changes in tax policy in the US or from another source, we would then be vulnerable. So in a way, we should be saving the hay while the sun is shining.”

Meanwhile, on the recent U.S. tax reductions, Mr Tannenbaum said, “Certainly anytime a country changes its tax code it could be it could result in a rebalancing.  The cost of capital is only one factor that companies think about when they are choosing a location. More important is the quality and availability of labour; the transportation situation, getting people to work and also the supply lines, if your goods producing firm how far is it to ship. How hard is it to get more materials in? And in general, what is the tone of business in the country there. I think Ireland continues to check a lot of the favourable boxes and so it should be able to withstand the difference now in the corporate tax rate in the United States.”

Limerick Chamber President Mary Shire said that the consensus from the experts is that prudence is required.  “All the economic drivers are very, very positive. But it’s a time to be prudent also. And in particular government policy needs to stick with managing the economy carefully, not overheating it because we’ve seen what’s happened in the past,” she said.