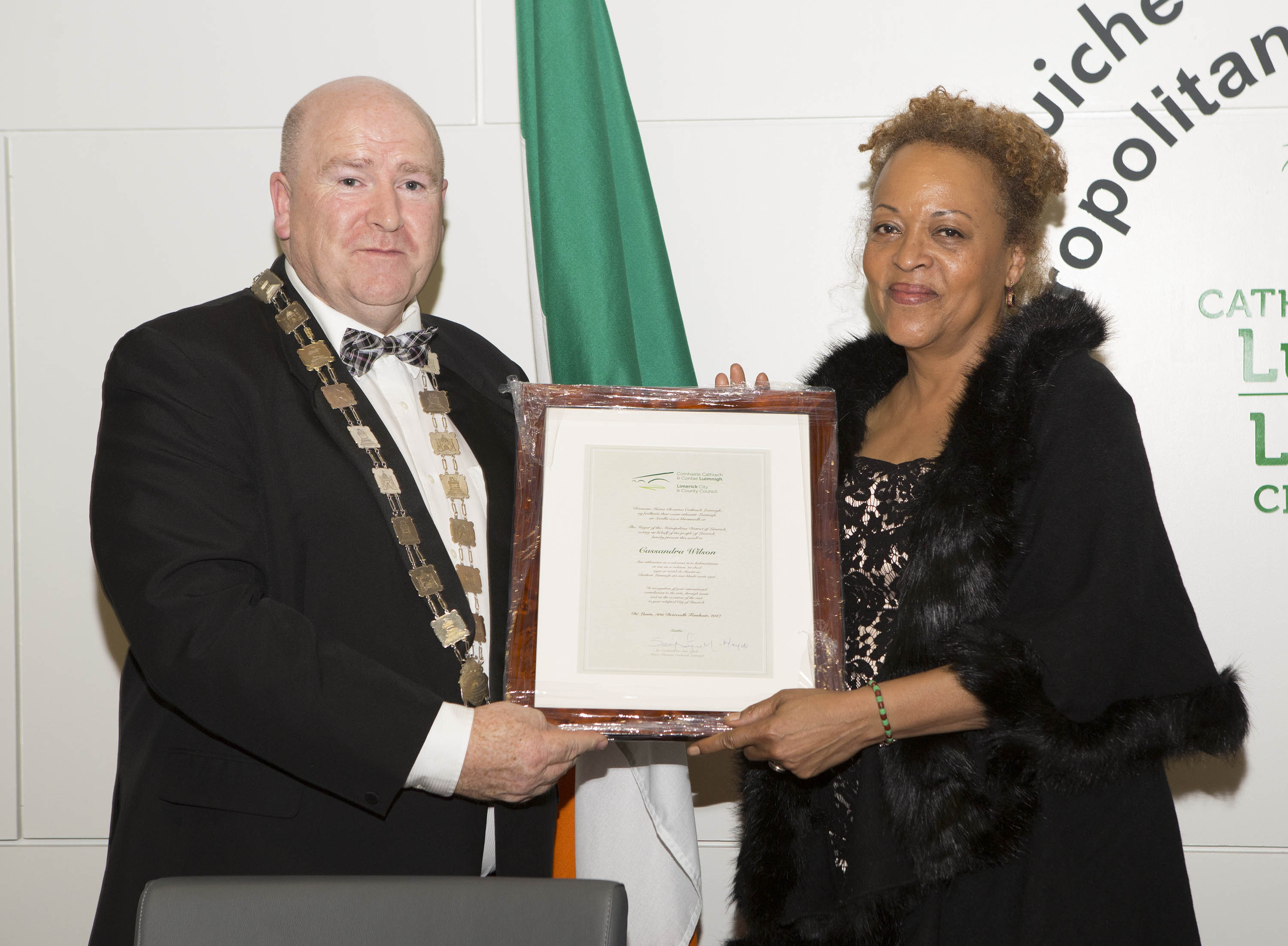 Pictured at the Mayoral Reception hosted by Seán Lynch, Mayor of the Metropolitan District of Limerick where he presented a parchment to American Jazz artiste Cassandra Wilson. Picture: Liam Burke/ Press 22.

At Cassandra’s Mayoral reception which took place Monday evening, October 30 at Limerick City Hall, Mayor Sean Lynch presented Cassandra with a parchment for the significant impact she has made in the jazz world.

Sean Lynch said about the mayoral reception held for Cassandra Wilson: “Limerick Jazz is celebrating 35 years of promoting live Jazz music in Limerick and it was a great first opportunity for the Limerick Council to celebrate jazz in Limerick.”

“The Mayoral reception and parchment which I presented to Cassandra Wilson on the evening was a recognition of her contribution to the arts with all her work throughout the years as well as to honour her visit to Limerick, and it is an honour for me to say that Limerick is the first city to ever hold a mayoral reception for this world-renowned, multi-award-winning icon,” Sean Lynch added.

Cassandra Wilson who is not just a jazz musician but also a vocalist, songwriter and producer began playing music at the tender age of seven and was working as a professional vocalist by the mid-1970’s. In the early 1980’s she linked up with saxophonist Steve Coleman in New York and became a founding member of the hugely influential collective M-Base.

Following her days from M-Base and up until present day, Wilson has continued interpreting Jazz, Vintage Blues, Country and Folk music in a fresh and creative way and the same can be expected when she performs in Dolans Pub this weekend presenting her newest and totally unique project in which she brings together elements of American jazz and Irelands rich and internationally renowned tradition of songwriting and lyricism.

Cassandra Wilsons awards include two Grammys, the Django D’Or, the Edison Music Award, and a marker on the Mississipi Blues Trail so anyone attending her live gig this Saturday is sure to be in for a treat of the senses.

To find out more about Cassandra Wilson click here

To read more of our stories on Limerick Jazz click here

Startup Weekend Limerick is back for its seventh year running