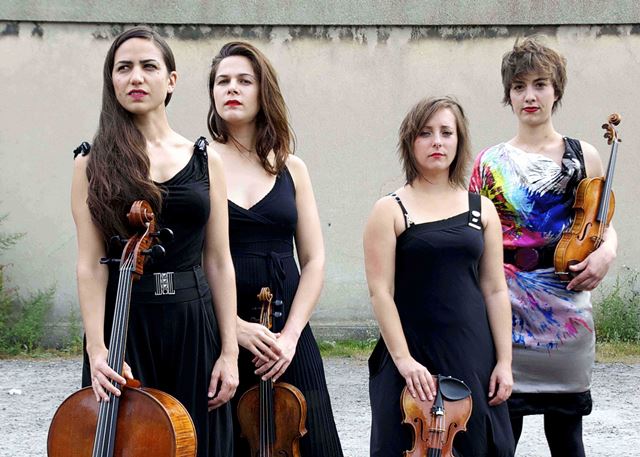 The first act of the Castleconnell Autumn Concert Series will take place on Tuesday 25th August at 8pm.

The 10th annual series is hosted by the Arts Office of Limerick City & County Council and the Castleconnell Concert Committee, and supported by the Arts Council, Limerick 2020 and Music Network.

Ticket details for the Castleconnell 2015 Autumn Concerts Series programme at the All Saints’ Church (tickets €15 available at the door prior to each performance, €10 concession).

Stuart O’Sullivan is one of Ireland’s most well known and successful pianists. Born in Dublin, he studied piano at the Royal Irish Academy of Music in Dublin.  Stuart has performed extensively as a recitalist and has appeared as concerto soloist with both the National Symphony Orchestra of Ireland and the RTE Concert Orchestra. He has made many radio and television broadcasts.  As a pianist, he has a large and varied repertoire.

Péter Sebestyén graduated with a degree in classical cello from the Liszt Academy in Budapest, Hungary, as a performer and teacher in 2008. He is currently a member of the Concerto Malaga Chamber Orchestra in Spain. Peter studied the MA in Classical String Performance at the Irish World Academy, University of Limerick, from 2008-2010. He was awarded the RTÉ Lyric FM Scholarship and also the Academos, Irish World Academy Strings Scholarship.

Schumann:  Fantasiestücke for Piano and Clarinet Op 73, Version for Violoncello:

Schumann:     Adagio and Allegro Op. 70 for Piano and Horn, Version for Violoncello

Mia Cooper and Anna Cashell, violins, Joachim Roewer, viola, and William Butt, cello have a combined bounty of experience as orchestra leaders, principals, professors, recital and recording artists.  Their common love of the quartet treasury drove them in 2010 to ignore it no longer and seek each other out. Their name reflects their admiration for Michele Esposito, pianist and composer, who for forty years from 1888 was the initiator for much of the chamber music making in Dublin through the establishment of The Royal Dublin Society. They have enjoyed recent concerts in Newry, Killaloe and Dublin. 2016 plans include recording Esposito’s string quartet alongside works of his continental contemporaries as well as a tour in Ireland.

Be blown away by the technical brilliance and ineffable élan of the Zaïde Quartet, a daring young French string quartet currently making waves on the European chamber music scene, presented by Music Network.

In a remarkably short space of time, the Zaïde Quartet has established a formidable reputation as one of Europe’s finest young string quartets. Noted for its rare blend of fiery technical brilliance, delicate ensemble interaction and bold, adventurous musical imagination, the French ensemble will deliver an exciting programme ranging from Mozart and Shostakovich quartets to a contemporary Irish work.

In the past three years, the Zaïde Quartet has been invited to perform in venues such as Wigmore Hall, Berlin Philharmonie, Amsterdam’s Concertgebouw, the Théâtre des Champs-Elysées and the Beijing Performing Arts Center, and last year released a much-lauded debut album featuring works by Janáček and Martinů.

Soprano Sylvia O’Brien, cellist Christopher Marwood and pianist Michael McHale come together in an unusual combination to perform ‘A Romantic Voice’.  The programme will include works for soprano, cello and piano by Messiaen, Berlioz, deFalla, Andre Previn; Fauré’s Cello Sonata in D minor Op.109 and solo piano works by Phillip Hammond and Schubert.

Sylvia O’Brien has Europe wide success in opera, oratorio and as soloist with orchestras in a wide range of repertoire.  She particularly likes performing in chamber ensembles and has sung in a number of chamber music festivals.  Christopher Marwood is cellist of the Vanbrugh Quartet.  As soloist he has performed the major concerti and given recitals around the UK and Ireland.  He is co-founder of the West Cork Chamber Music Festival.  Belfast-born Michael McHale has given debut recitals in the NCH, London’s Wigmore Hall and in Washington DC as well as soloing with a number of major orchestras.  He also enjoys performing in chamber ensembles.

The concert is part of a classicallinks tour funded by an Arts Council Touring Award.