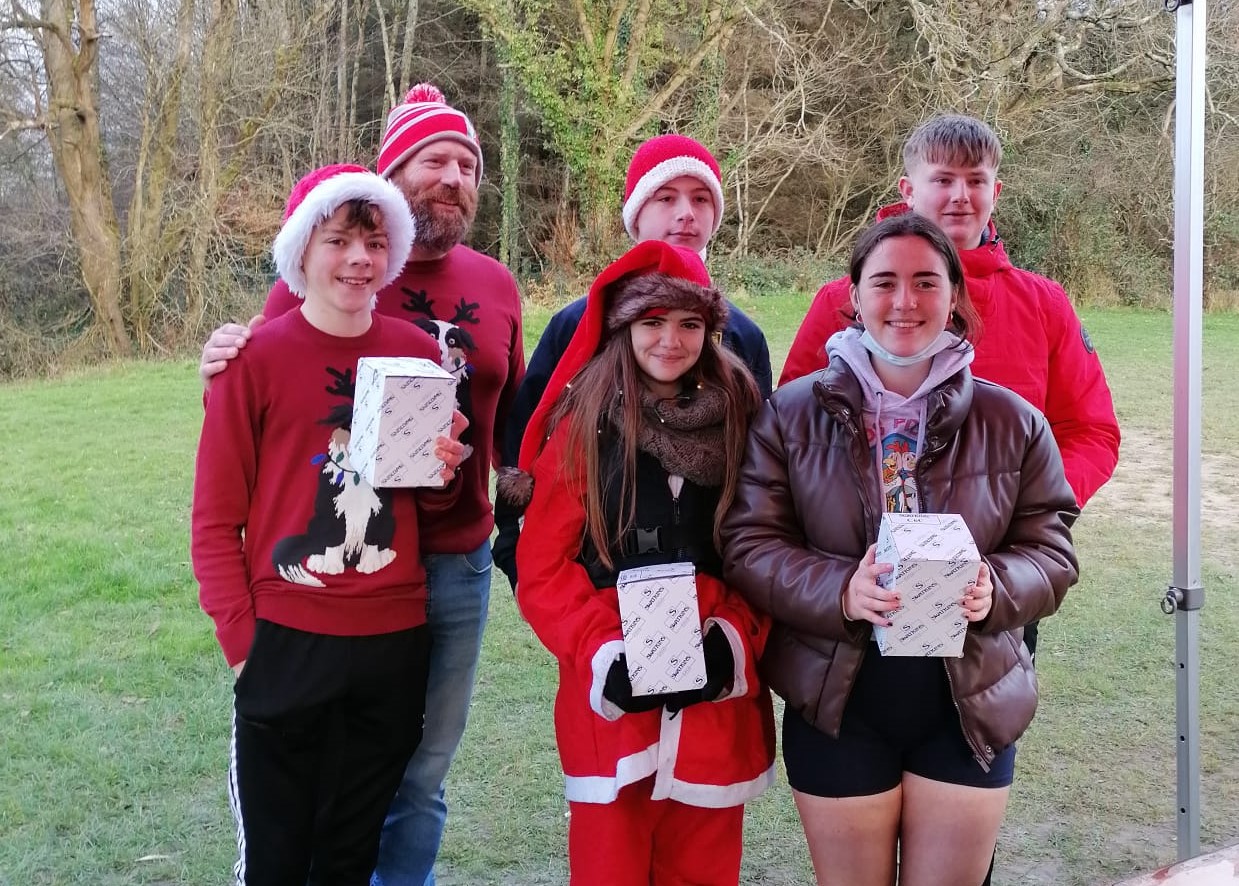 Castleconnell Boat Club Captains Cup – Winning Crew of the day with Club Captain Colin Byrne after being presented with Cups.

Oldest member of the CCBC Joe Gleeson with his younger crewmates ready to launch.

On Saturday, December 18, thirty crews took to the waters for the Castleconnell Boat Club Captains Cup.

Names of Castleconnell rowers were drawn from a hat, which resulted in mixed crews. One crew ranged in age from the youngest members aged 11 to Joe Gleeson, the oldest member of the Castleconnell Rowers at 80 years old who is also a member of Masters Men’s Crew, who are currently looking for retired ex-rowers to join their crew, competing in the same boat.

The crews competed in various knock-out rounds which resulted in a very exciting race and winning crew.

Derek Bowen, coach of Under 18’s, won both the Castleconnell Boat Club Captains Cup and Club Person of the Year.

Each rower dressed up in festive gear such as Santa costumes and Christmas jumpers, and there were even a few elves to be spotted partaking in the rowing festivities.

The rowing juniors had an idea to do something which had never been done before – to make the coaches have a race, even though some of them had never rowed before!

As well as giving the rowers a laugh (especially the juniors), the coaches’ race acted as a fundraiser for Temple Street Children’s Hospital.

We had a great festive day yesterday at our annual Captains cup?
Our coaches took part in a sponsored race & thanks to everybody’s donations, we raised €1200 for @TempleStreetHos!
Congratulations to Derek Bowen on winning the President’s prize for Club person of the year. ? pic.twitter.com/Wf4asKboE4

The fundraiser proved to be a huge success and raised a total of €1,200 for Temple Street.

The Castleconnell Boat Club was founded in 1983. For over 30 years, they have been introducing the sport of rowing to athletes of all ages.

They are passionate about the sport and are committed to sharing the values and benefits of rowing.

The club is situated on the River Shannon and takes advantage of the stretch of water between O’Brien’s Bridge and World’s End.

The club is open to members aged 11 years and up. If you’re interested in learning how to row, they encourage you to get in touch with them.

For more about the Castleconnell Boat Club go HERE

For more stories about the Castleconnell Boat Club go HERE