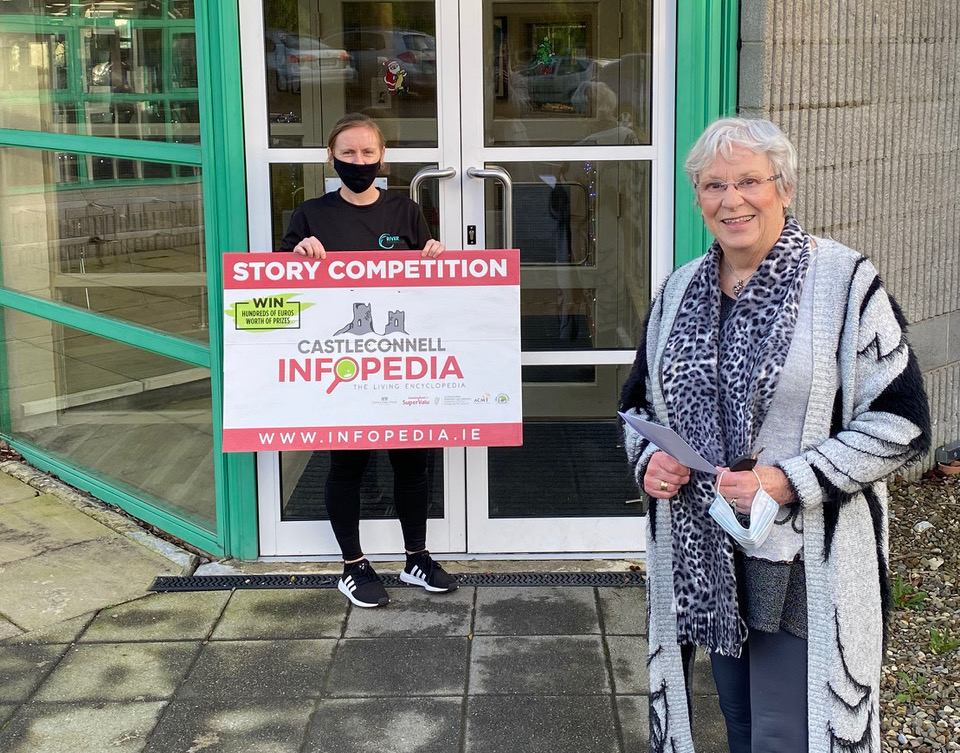 Castleconnell is steeped in history and heritage, of that there is no doubt but when organisers asked for historical stories and tales of hidden history to be told within a story competition no one could have expected such an amazing true story to be told.

The competition was judged by local resident and one of the most highly respected writers and poets in Ireland, Stephen Murphy. Described as the “…new Bard of the country” by none other than President Michael D. Higgins. Stephen had the arduous task of sieving through the entries but was satisfied that there was one clear winner, with 3 other stories claiming the top prizes.

“Already, by the end of the first paragraph, there’s a great sense of the fiery Annie Hartigan and the scene set around her, which continues throughout the story. It’s both really well told, and a deeply fascinating tale about the history of the area – Napoleon’s death-mask isn’t something you’d expect to show up in a trunk upstairs in a house in Castleconnell! – and it’s recounted with such precision that it left me wondering how whoever wrote this had such accurate descriptive detail for the story as it happened,” Stephen Murphy, Infopedia Competition Judge said of the first place winner.

The competition was held to celebrate the launch of a new website for Castleconnell called Castleconnell Infopedia. This joint venture between ACM & Love Castleconnell was supported by The Department of Culture, Heritage, and the Gaeltacht and Audience Engagement Funding Scheme.

“We have had a huge response to the competition, and we are delighted. The stories will be published on the website for all to read. We also had a fantastic response to our questionnaire, which is invaluable for people to be able to share their thoughts. We are still encouraging people to contribute to this. The aim of which is to give the general public the ability to offer feedback and offer opinions on how to improve life within the village,” said Nicky McNamara, Love Castleconnell.

Infopedia.ie is a Living Encyclopedia designed to capture and preserve information about the community and the surrounds. It will gather together personal stories, local history and heritage, cultural events, the natural habitat and community achievements all relating to the village.

LOVE Castleconnell, is a voluntary, community organisation, founded by residents Tara Hartigan, Nicky McNamara and Eamonn McQuade. The aim of the group is to encourage tourists and residents alike to Live, Own, Visit and Enjoy the scenic village of Castleconnell, including it’s riverside walks, rich heritage, history, artistic and musical offerings.

Annie Hartigan, was a small fiery, red-haired, dressmaker who lived all her life in Railway Cot- tage, now refurbished and renamed Sloe Berry Cottage, next to the Garda station in Castleconnell.

One day in the 1950s Edward Hartigan, her nephew, was working in the house accompanied by his youngest son Leslie.
Bored and with childish curiosity Leslie climbed the stairs onto the small landing and noticed a large antique leather trunk pushed beneath the eaves. On lifting the lid he felt the hairs stand up on the back of his neck as a ghostly white decapi- tated, disembodied head peered out from the darkness.

Dropping the lid, he fled down the stairs and out into the sunlight.

Having recovered from the shock, Leslie persuad- ed his Dad to come with him to investigate further. They discovered that “the head” was accompa- nied by a newspaper cutting, which stated in bold print, “Napoleon’s death mask missing.” and a handwritten letter, which stated that Napoleon’s death mask had been handed to Major Thomas Gilley on a ship in the Mediterranean in 1821, the year that Napoleon died.

Major Gilley was a friend of the Hartigan’s and when he died his wife gave the death mask to Patrick Hartigan, Edwards father and Leslie’s grandfather. Castleconnell Infopedia Competition

Annie, now in poor health, moved into Ingoldsby, to live with Edward and his wife Edith.

Canon James Pennefather, the Church of Ireland Rector of All Saints Church, Castleconnell, was a regular caller to Ingoldsby and on one of these visits he was shown Napoleon’s death mask and its accompanying certification of authenticity. Being both amazed and intrigued he suggested that Judge Gamble, who had recently retired to live in Ballinacourty House, might be asked for an opinion as to who could be interested in apprais- ing this unique find.

Judge Gamble, made contact with a Baron de Brie in London who expressed interest in the information.

The mask and the handwritten letter were wrapped and transported to London by Judge Gamble. A few weeks passed and the Judge returned, without the mask and the handwritten letter but with an offer of 24 guineas, which was to be divided between Annie, Edith and Edward. Edward did not want to sell but was overruled by the two ladies and the 24 Guineas were duly paid , divided three ways and the deal done.

Not long afterwards Castleconnell village was invaded by a number of French reporters and media officials who all wanted to investigate the whereabouts of Napoleon’s death mask that, having been bought in a London auction, had just been installed in pride of place in the Musee de Armee, at the Invalides in Paris.

Annie Hartigan died on the 10th of February1961.

In July 1971, Leslie and his new wife Barbara, visited Paris and found the mask in close proximity to Napoleon’s Tomb and his beloved horse, not hiding in a dusty, leather trunk, but proudly displayed in a glass cabinet on rich red velvet, the same face that had once so terrified a small boy, now bearing the inscription.

“Napoleon’s Death Mask, recovered in a small cottage in the south of Ireland.”

Major Thomas Gilley, lived out his days in Castle- connell, in Rock Lodge, and was laid to rest in an elaborate grave at the rear of All Saints Church, marked by a wonderfully crafted monument, which he created for himself, finished, except for the date of his death,

(Easter Day 1869 aged 63.) which was carved and completed by his son, also Thomas Gilley.

Napoleon’s Death Mask, has now been relocated to the Maison Bonaparte, in Ajaccio, in Corsica.