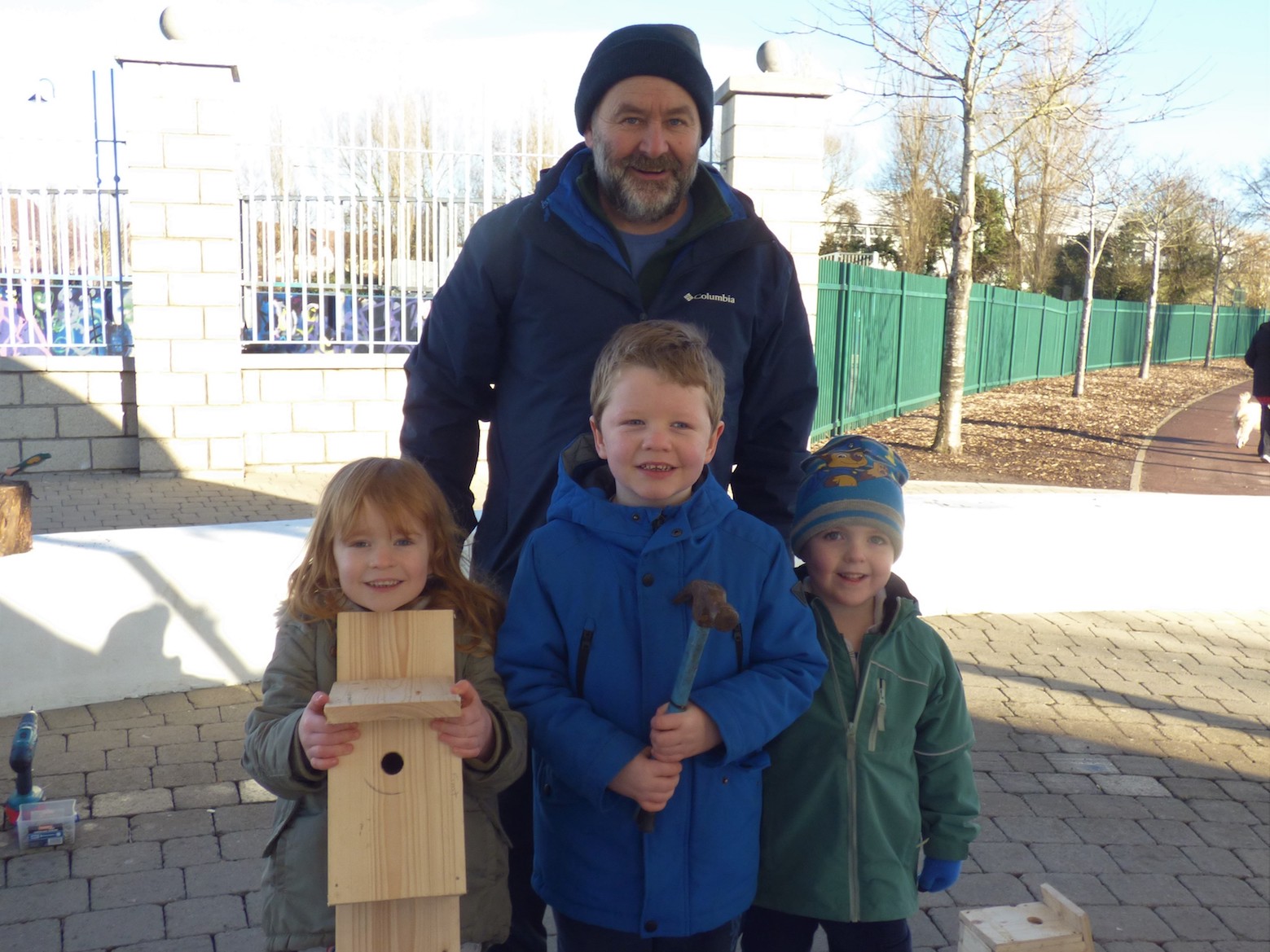 An icy February morning found An Taisce Living Limerick in Castletroy Neighbourhood Park. This maturing haven is a safe place for nature, and also a green space for the surrounding residents. I joined Sean Hartigan, Co-ordinator Living Limerick and Pete Beaumont, environmentalist and weaver, for a workshop on creating habitats for wildlife. Stevie, Sean’s son, was on the camera and took some excellent photos and videos. We set out to show people how to create mini-habitats, for birds, insects, and animals.

Sean and Pete, and I prepared for the workshops. I handed out some workshop leaflets to busy parents. Many had ballet and sport but made the effort to come along. Sport and nature are a perfect healthy balance for developing kids.

While we waited we chopped some fallen branches to make a log pile. I am sure from the strange looks of passer-byes that they thought we were gathering firewood.

Soon there was a large crowd of kids and adults. Many others joined in during the workshop especially as word spread through the parenting network.

Sean started off by assembling a bat box. There was great enthusiasm for using the drill and hammer, and thankfully no fingers were bruised. He explained that bats need a clear line of flight, when flying in, and put three or four boxes up together.

Bats don’t like strong night-time lights or cold easterly winds. Bats are the pest controllers of the natural world, and each bat can consume up to 3500 insects each night. One lady who lives nearby has bats near her house and is treated to an amazing show each night.

Pete with his infinite patience and skill showed the group how to weave willow and the kids loved this. One of the girls brought home a big bundle of willow to practice with. The great thing about these nature workshops is that you never know what lifetime interest has been ignited.

Next, we assembled a bird box, and these can go up at any time of the year. If they have not been occupied after two springs, move to a different location.

Sean sharing his passion for nature at Castletroy Neighbourhood Park.

Earlier I had gathered some reeds from around the pond. We cut these into short lengths, and the kids made a bug hotel. Sean showed the kids how to make homes for solitary bees. They drilled holes in a large log in which the solitary bees will lay their eggs inside.

I took a group down to the woodland edge, to place the hedgehog hotel and log pile. The kids covered it with leaves, and a hedgehog might be resident in the autumn. The logs will break down and perhaps entice a frog.

After the workshop, I stayed around, as I had never been to the park before, and was keen to learn more about its wildlife. To the throaty calls of the woodpigeons and loud song thrush, I started exploring. A pair of blue tits were out before me, and searching along the thin branches, for spiders and their eggs.

I was naturally drawn to the hedgerow bordering the park. It runs the whole way around the park, developing into a woodland edge, and varying in width and tree species. Unusually the tallest tree is a willow, and I used to see these as a low shrub. Ash and Hawthorn are next followed by an oak that was planted by the council.

I stood perfectly still and watched a song thrush eating a worm on the warming ground. Next door I heard the jackdaws, doing their early morning shopping at the back of Centra.

Privet is excellent food for the caterpillars of moths, and Bramble has a tangled growth for nesting birds. I also discovered the serpentine mine of a micro moth on one of the bramble leaves.

Ivy berries are food for the woodpigeons, and the long green catkins of hazel were hanging for the branches. I was surprised to find the wild dog rose, with a few berries still left on its branches. The yellow flowers of gorse, are just starting to bloom, in the spring sunshine. The ground layer had the withered stems of yarrow, knapweed and fresh nettles. Stacked branches, leaves and grass clippings finished off a valuable habitat for wildlife.

Across the road, the hard calls of a hooded crow woke up some blackbirds. They came scolding out of the trees and disappeared deep into the park. A starling was in a calmer mood and was singing from the electricity wires.

I headed into the park, and the first trees to catch my eye are all popular. They grow quickly, but alder has the same growth rate and also dries up the ground. Alder also supports countless insects and flocks of siskins and redpolls. Dogwood has been pruned to within a foot of its life, but this treatment makes the shrub more vigorous. The native dogwood supports the caterpillars, of many species of months, but I am not sure about the cultivated varieties.

Small open groves of oak and ash will eventually touch branches and create a mini woodland for birds, insects and animals. If the leaves were left around the trees, it would attract birds like thrushes that would hunt through the leaf litter. A chaffinch burst into song and they started to sing on the first day of spring.

I followed the winding path past groves of mature trees in the open lawns. These make a safe stopping point for birds, and small creatures, who don’t like to cross large open spaces. Also, I am sure they are used by the local children, as dens and places were their imaginations can run riot. A great tit is already a resident, and I hear his strident calls.

I walked into the woodland edge, through a well-worn path. The hazel trees are full of catkins and come the autumn the nuts will be a valuable source of food for birds and red squirrels. Been native, it also supports a myriad of insect species.

Seasons of grass cuttings, leaves and prunings have created a rich decaying layer. It is full of minibeasts that are food for birds. The damp and shade of the trees create an ideal habitat for some plants. Ferns abound, and the fresh leaves of lesser celandine, are just emerging. Before I left the shelter of the woodland edge I heard a Magpie calling.

Large oak trees are dotted throughout the park, and going by their age, they were here before the development of the park. I reached the back and the pond is frozen over. A dad and his two sons are having great fun breaking the ice. Thick reed beds surround the pond and in spring, they will hopefully be frog spawn, and on warm summer days, flying jewels that are dragonflies.

Birch trees with their eye-catching silver bark, work well in small groves. They also support dozens of insects, during their short life. Another grove has an interesting mix of ash, oak, holly and hornbeam. Behind the trees, I spot a hooded crow, and he quickly flew off as I approached.

I returned to the car park and meet two busy pied wagtails on the way. They are searching for seeds and a few insects. The clever rooks are drinking from a puddle. The sun has melted part of the ice, and this water must be very refreshing. Another rook arrives and hops along with head down like a bull. He drives away the other rooks and keeps the puddle all for himself.

Sean Hartigan, co-ordinator Living Limerick is looking to engage communities around learning how to create wildlife homes & habitats in your garden and community that will attract, feed and shelter wildlife. These include log piles, hedgehog homes, bird boxes, bat boxes and insect hotels. Suitable for all ages. If you would like to organise an event in your area email Sean Hartigan here

Comments/ Questions to [email protected] or 089 4230502. Albert is also available to give walks/ talks to schools, tidy towns, youth and community groups.