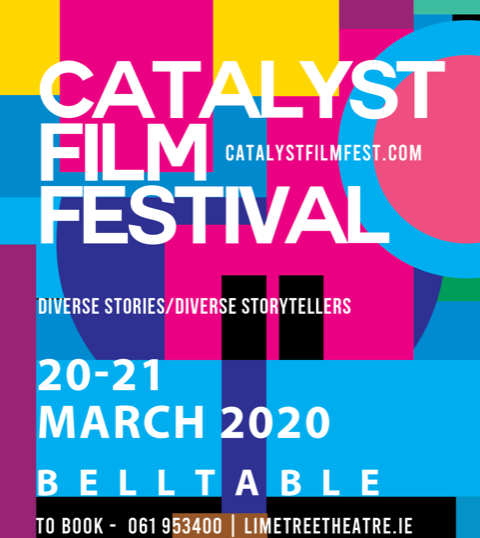 Poster for the Catalyst Film Festival 2020.

The inaugural Catalyst International Film Festival 2020 will take place in the Belltable, Limerick, from Friday to Sunday, March 20 – 21, presenting a film programme that prioritises stories and storytellers currently under-represented on screen and behind the camera.

This festival is the brainchild of well-known filmmaker, writer and Mary I academic, Dr. Susan Liddy and the award-winning producer/director/writer Vanesa Gildea. Led by Dr. Susan Liddy and Vanessa Gildea, the festival will endeavour to create a more inclusive industry and films screened at Catalyst will promote gender equality, diversity and inclusion in front of or behind the camera

There will be panel discussions and Q&As where topical issues of the day will be enthusiastically debated with filmmakers, guest speakers, industry personnel and audience members. We believe that equality is key to enriching filmmaking and audiences and it is core to this festival.

Dr. Susan Liddy lectures in the Department Media and Communications in MIC, Limerick Her edited collection Women in Irish Film: Stories and Storytellers has just been published by Cork University Press (Feb 2020) with a formal launch in the Royal Irish Academy Dublin in April. A second book will be published by Palgrave Macmillan in August 2020 entitled Women in the International Film Industry: Policy, Practice and Power.

Susan is actively involved in the industry as chair of Women in Film and Television (WFT); chair of the Writer’s Guild of Ireland’s Equality Action Committee (EAC) and has recently been appointed to the advisory board of Women in Film and Television International. She has organised a wide range of public debates on gender and diversity at film festivals, universities and industry events; she has traveled to a number of European film festivals to contribute to panel discussions and build connections with groups championing inclusion and diversity and has served on festival juries for short film.

Vanessa Gildea is an award-winning producer/director/writer, vice-chair of Women in Film & TV Ireland and a lecturer at the National Film School IADT. She is a Liberal Arts graduate of MIC and has maintained a close connection with Limerick over the years.

Vanessa has extensive industry experience, initially with Film Base and Loopline Film, and later as a freelance producer and director. She has received four IFTA nominations including The White Dress, Dambé – The Mali Project, John Ford – Dreaming the Quiet Man & more recently for The 34th –  A history of Marriage Equality in Ireland. She also worked over a two-year period in archive on the IFTA winning landmark documentary ‘1916: The Irish Rebellion’. Vanessa continues to work freelance as a producer and director with a variety of companies including COCO TV, Harvest Films and RTÉ Arts & Culture on projects as diverse as Culture Night Live, Dermot Bannon’s Incredible Homes, The Irish Folk Awards and I’m Roger Casement.

Riverfest 2020 postponed due to ongoing concerns about COVID-19