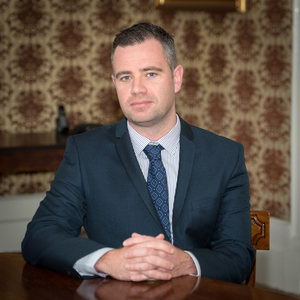 Dr James Ring, CEO of Limerick Chamber, has announced his departure to take up a senior role in a Limerick headquartered international consultancy company.

Dr. Ring advised the board of his intentions this week and will leave his post at the end of June, to take up his new role as CEO of Ingenium TC, which provides a range of industry programs domestically and internationally in the development of People, Culture, Leadership, and Strategy within organisations. Operating in 12 countries globally in a variety of sectors, including technology, pharmaceutical, professional services, telecommunications, construction and the public sector, as well as with global businesses in the energy and resource sectors.

Dr. Mary Shire, President of Limerick Chamber, commended James’s contribution to the Chamber as CEO. “James has been an excellent CEO.  He has built a strong team and leaves the Chamber in a very positive place. In his time he has significantly strengthened the Chamber as a representative and support organisation for business in Limerick and the region. We wish him the very best in his new role.”

Among the highlights of Dr. Ring’s tenure as CEO of the Chamber are the rollout of the corporate partners’ programme, the regional leaders’ programme and the successful lobbying campaign for the M20 Limerick to Cork motorway.

Reflecting on his time with the Chamber Dr. Ring said, “It’s with a heavy heart that I announced my departure as CEO.  I have enjoyed the role immensely and have been lucky to have worked with great boards, outstanding Presidents in Catherine Duffy, Northern Trust, and Ken Johnson, from PWC and a really dedicated and enthusiastic team within the Chamber.

“I have been fortunate also to have taken up this role during a period of very significant advancement for Limerick. There has been a record level of inward investment and jobs into this city and region over the past three years and much of that is down to an outstanding spirit of collaboration here between all the key stakeholders, among them Limerick City and County Council, Shannon Group, Shannon Foynes Port Company and our third level institutions.”

“I would like to think that in my time as CEO, Limerick Chamber, too, played a role in this economic renaissance. We have pushed a pro-business agenda throughout and sent a very clear signal to businesses, big and small and new and old, in this city and region that our fundamental role is to ensure the operating environment for them supports their end goals – to grow their business and create jobs.”

A recruitment process, headed by Maurice Carr, Partner at BDO, has been put in place to identify a new CEO for Limerick Chamber.

Commenting on the recruitment process for the new CEO Dr. Shire said, “There is a wonderful opportunity for the next CEO to build on what the Chamber has achieved under James’s leadership and to make a significant contribution to the economic development of Limerick and the region. To deliver on this, the new CEO will require strong business leadership, networking and relationship building skills with the key stakeholders locally and beyond. The ability to prioritize and promote the important policy issues relating to the region will also be an essential requirement.”