By Richard Lynch on February 26, 2016@richanthon 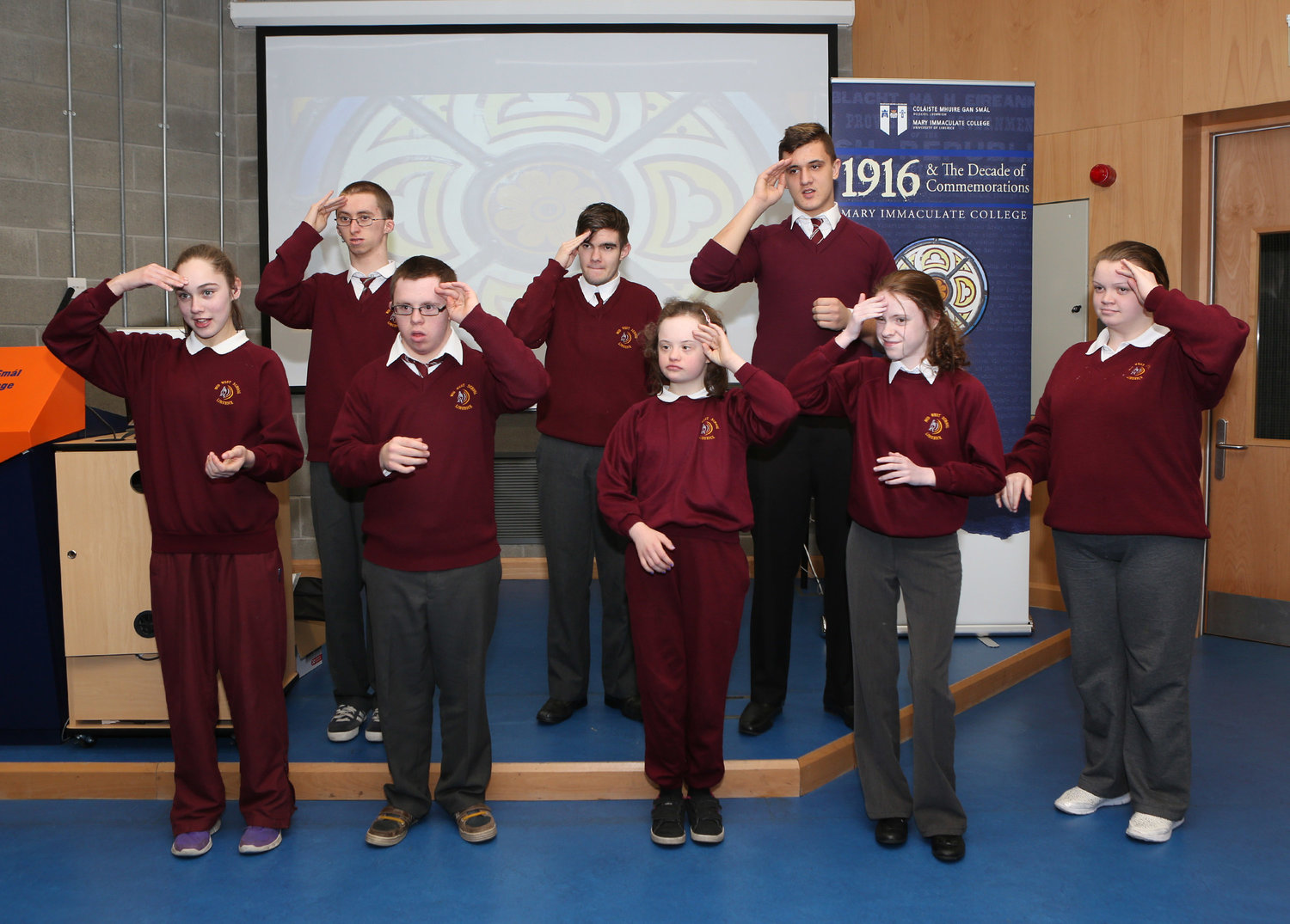 Pictured at MIC performing the first ever public signing of Amhrán na bhFiann were students from the Mid-West School for the Deaf. The children were performing at the opening of the Changing Faces of Ireland photo exhibition, currently on display at Mary Immaculate College as part of the College’s programme of events to commemorate 1916.  Back row left to right. Patrick Collins, Alex Finucane and Christian Girlea. Front row left to right Ailis Ryan, Jack Hogan, Kasey Marfell, Ava Shaw and Chloe Dillon.

Today saw the opening of the Changing Faces of Ireland photography exhibition currently on display in Mary Immaculate College as part of the College’s programme of events to commemorate 1916. The exhibition portrays the vibrancy of school life throughout the decades with photos from two of Limerick’s oldest schools, Villiers School and Presentation Primary School alongside the more recently formed schools, Limerick Educate Together East and Limerick School Project. Providing a snapshot in time from the 1930’s all the way to 2016.

Displaying photos of various class years, sports teams, science classes, and other notable school events, this exhibition explores some of the ways Limerick has evolved and changed over the last century in terms of its demographic make-up. Limerick has experienced a significant increase in the diversity of religions, ethnicities, cultures and nationalities of its inhabitants over the past few decades. According to one of  the event organisers, Brighid Golden, DICE Coordinator, MIC “School photographs are a wonderful way to reflect on the changes which occur in society overall. The faces of children along with the activities, clothing and surroundings in each of the photographs in this exhibition tells the story of how Limerick has evolved over time and gives an insight into Limerick of today”.

Opening the exhibition Prof. Michael Healy, Associate Vice President of Research, MIC; thanked the participating schools for their commitment and enthusiasm to the project. “We believe that the snapshots provided in the photographs speak to the vibrant history of schools in Limerick; indeed we are delighted to have two of the oldest schools in Limerick included in the exhibition. Presentation Primary was founded in 1837 and Villiers School was founded in 1821. Photographs from these two schools take us on a journey through time as we can explore photographs from the 1930’s all the way to 2016.

“Side by side with these schools we have Limerick School Project founded in 1989 and Limerick Educate Together East founded in 2004. We very warmly welcome the inclusion of these newer schools which were established to meet the needs of Limerick’s changing demographic, which is what this project is exploring”. The launch also included a historic performance of Amhrán na bhFiann which received its first ever signed public performance by children from the Mid-west School for the Deaf.

Also available to view at Mary Immaculate College is Life of a Child at School in the 1916 Period exhibition– a life size model of 1916-style classroom currently on public display in the Main Foyer. Changing Faces of Ireland, organised by Brighid Golden, DICE Coordinator; Ruth Bourke, TED Project; and Santhi Corcoran, PhD Student, MIC; forms part of a range of events organised by the Department of Learning, Society and Religious Education in commemoration of 1916.

For more information check out the MIC site here