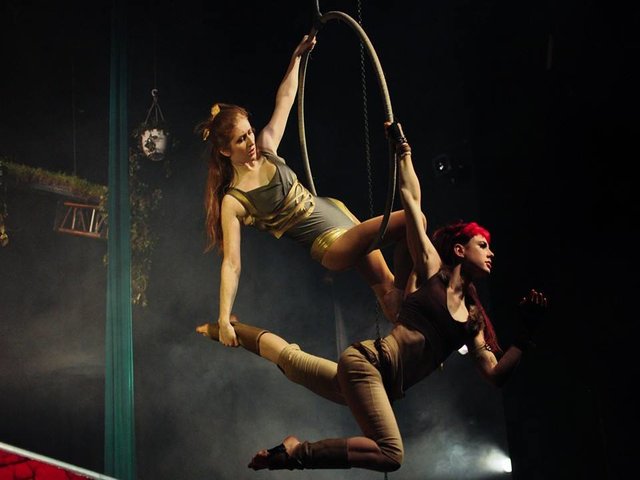 Charged by Ether at the Irish Aerial Creation Centre

Charged by Ether performed at the Irish Aerial Creation Centre, Limerick, on February 20, at 6.30 pm.

Ether is an aerial circus theatre company that has been making spectacular work that connects with audiences since 2012. Using rope, hoop, pole, silks and trapeze, Ether has charmed audiences with up-close aerial and transported them with breath-taking sets.
Ether’s shows include Mirror Mirror, an intimate, boutique show in the 2012 Fringe that earned them five stars from the Irish Times, The Locked Room, a comic two-hander, and Landfall, a spectacular sell-out show on a suspended set in the Project arts centre.

Niamh Creely is a writer that ran away with the circus many years ago and never looked back.

In January 2012, Niamh brought together the Ether crew, Arlene Caffrey, Aisling Ní Cheallaigh and Jonathan Walsh. With their powers combined, they brought a brand new flavour of circus to the Irish public. Ether now consists of company directors Niamh Creely and Jonathan Walsh. Mixing narrative with circus, and genuine emotional engagement with stunning comic timing, Ether is unique and entertaining for all ages and characters.

On February 20, there will be a chance to see Charged by Ether that all the team have been working on during their Arts Council funded development period, in the Irish Aerial Creation Centre.

The piece is an excerpt of the in-development new work ‘Charged’ and features four performers showing their skills on trapeze, rope, aerial hoop and cyr wheel. The show is an experiment, so expect strangeness, laughter, and audience interaction. It’s about power and pleasure, control and failure and the strange and beautiful prison that is our flesh.

You can be guaranteed some top-notch circus skills, the rest however, is a mystery. So come along, get cosy and complete the show. Warm clothing is advisable on the night.

The informal showing of Charged by Ether will start at 6.30pm, but all atendees should feel free to arrive at 6 pm for some pre-show refreshments and socialising. The event is admission free and suitable for all ages and characters. A guaranteed fun filled and exciting night of entertainment.

Have a look at Ether’s Landfall promotional video below.