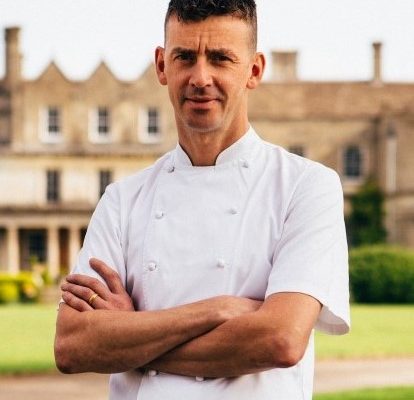 The 5* Adare Manor, voted ‘Hotel of the Year 2018’ at the world-renowned global Virtuoso ‘Best of the Best Awards’, is delighted to announce and welcome award-winning Michelin Star Executive Chef Hywel Jones for a special two-day luxury culinary experience.  Hywel who has retained his Michelin Star for 12 consecutive years, and currently is Executive Chef for the Michelin-starred restaurant at Lucknam Park in Wiltshire and The Brasserie, will be hosted by Head Chef of Adare Manor’s fine dining Oak Room restaurant, Mike Tweedie.  On Sunday, 28th April, Hywel and Mike will unveil a five-course tasting menu in The Oak Room and on Monday, 29th April, Hywel will hold a private kitchen demonstration, which includes a special three-course luncheon in The Carriage House Terrace.   Guests have the option of attending one or both of these unique occasions.  We are limited on the number of guests we can accommodate, and it is recommended that individuals wishing to attend, make their reservations in advance to avoid disappointment.

Hywel Jones started his career with David Nichols at The Royal Garden, before moving to work as Chef de Partie in two Michelin 3-star establishments at Chez Nico at 90 and Marco Pierre White.  Hywel was also Sous Chef at Michelin starred Le Soufflé and Michelin Star Head Chef for five years at Foliage restaurant at Mandarin Oriental Hyde Park.  Hywel was inaugurated into the Royal Academy of Culinary Arts in 2007 and made a fellow of the Academy in 2016.  In 2018, Hywel was appointed Co-Chairman of the Kitchen Committee for the Royal Academy of Culinary Arts Annual Awards of Excellence.

Mike Tweedie had the opportunity to work with Hywel Jones during the early stages of his career.

On Monday, 29th April, the second day will be hosted in The Carriage House Terrace restaurant, overlooking the beautiful surroundings of the resort and The Golf Course at Adare Manor.  This will commence with a special one-hour private kitchen demonstration by Hywel Jones, where Hywel will prepare dishes including:  Braised Cornish Turbot, Buttered Crab and Iceberg, hand-rolled Macaroni and Wiltshire Truffle Butter; Pistou of Spring Vegetables and Roast Diver Scallops.   This will be followed by a luxury three-course luncheon.

“I very much look forward to visiting Adare Manor.  My passion is fine food, and during my fifteen years at Lucknam Park, I’ve been fortunate to have had some fantastic Chef’s work with me, and Mike Tweedie is right up there with the very best of them.  Mike’s talent was evident from the very beginning, but it was his total passion, dedication and commitment to his craft that I remember the most.  We have remained close friends since he left and I have followed his career with interest. It is a privilege to be invited to Adare Manor, and I very much look forward to cooking alongside Mike again.”

Mike Tweedie, Head Chef at The Oak Room at Adare Manor, said:
“We are delighted to welcome Hywel Jones to Adare Manor.  We are very honoured for this opportunity to collaborate with world-renowned chefs such as Hywel.  Hywel like the team of chefs at Adare Manor take great care and attention to use locally sourced ingredients in season, and together we have prepared a wonderful menu for the two special days.  It is a great opportunity for food lovers and a first of its kind for Adare Manor”.

For guests wishing to make a reservation for one or two of the Special Events, individuals should please contact Adare Manor Guest Relations team on 061 605 200 or at [email protected]m.  Tickets are priced at €95.00 for Sunday’s five courses with tea and coffee in The Oak Room per person, with wine pairing for an extra €65.00; and €45.00 to add Monday’s Carriage House Terrace demonstration followed by the three-course special luncheon.

For other stories about the Adare Manor, click here