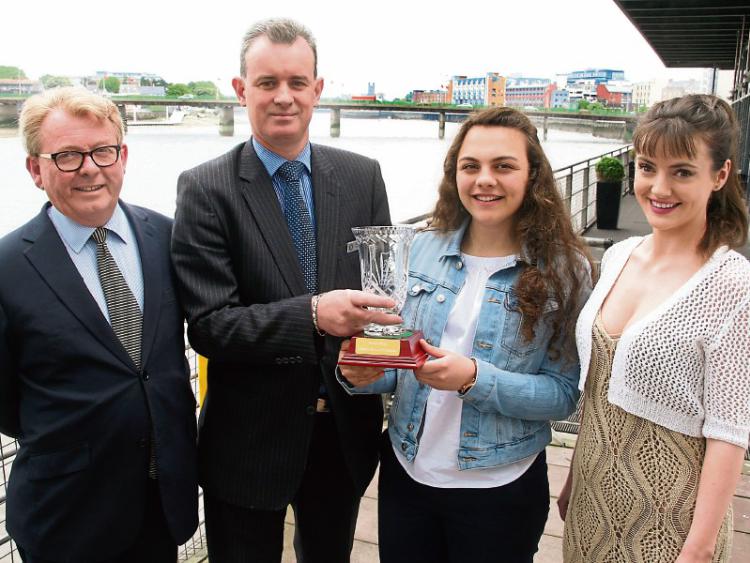 The teenager, Diana Mirza, who was crowned world chess champion after an all-conquering display in Romania, has been named the Limerick Person of the Month.

Diana Mirza, 16, a transition year student at Colaiste Chiarain in Croom, was the winner in the World Schools Under-17 Chess Championship following nine tough contests spread over 10 days in the Fide (World Chess Federation) governed event.

She took home her first gold world medal in the Palace of Culture in Iasi, which is the largest city in eastern Romania.

“It hadn’t sunk in until they called my name and played the Irish anthem,” she said.

“It is just motivating me to work harder,” smiled the teenager who was accompanied at the Limerick Person of the Month presentation at Limerick’s Clayton Hotel by her incredibly proud parents Gabriel and Stela.

Both Gabriel and Stela hail from Romania. Gabriel moved to Limerick “for a better life”.

“I picked the University of Limerick to study physical education,” says Gabriel who is a qualified PE teacher.

Diana herself was born in Limerick.

Currently ranked as the second best Irish woman chess player, she won the under-16 All-Ireland championships last year which included both boys and girls.

President Michael D Higgins led the tributes to the teen on her world success, as he took to Twitter to say: “My heartfelt congratulations to Diana Mirza from Limerick on winning the World Schools Chess U17 Girls Championship.”

Diana is now looking ahead to the World Individual Championships in September and also to next year’s Olympiad which is the Olympics for chess.

While Gabriel used to be Diana’s coach when she was younger she now has a coach who she does Skype sessions with once a week.

Sponsorship, Gabriel explained, is always much needed. It turns out that chess is an expensive pursuit.

“It’s really expensive because they are usually 10-day tournaments,” Diana agrees. “For some competitions like the World Championships and Europeans the players have accommodation and food paid for but there are other tournaments for which we have to pay for everything.”

The game itself is also not for the impatient. “The games can be very long,” says Diana.

“Each player has one hour and a half and after you make four moves you get an extra 30 minutes added to the clock so that’s already four hours and then every time you make a move you get an added 30 seconds to your clock.

“Within the four hours, you just have to stay and play your game. You can get up off your seat and walk around but I don’t usually walk around, and you can get water.”

The games can go on longer than the four hours. “Most of my games were maybe five or six hours but one of my games was around one hour and a half which is really short.”

The longest game Diana ever played went on for just over six hours.

“You can bring food in but I don’t usually. Some people have nuts beside them or dark chocolate.”

Despite the fact that none of Diana’s school friends plays chess, they are all extremely proud of the teenager as is her brother Mark, 12, who also plays the game.

Looking to the future, Diana who also plays basketball for UL Huskies is unsure exactly what she wants to do after school.

“I always wanted to be an author but I’ve changed my mind and now I don’t know – maybe something to do with English like an English teacher. I love writing,” she smiles.

The Limerick Person of the Month award is sponsored by the Limerick Leader, media agency Southern, and the Clayton Hotel.

To read more stories about Limerick Person of the Month, click here.