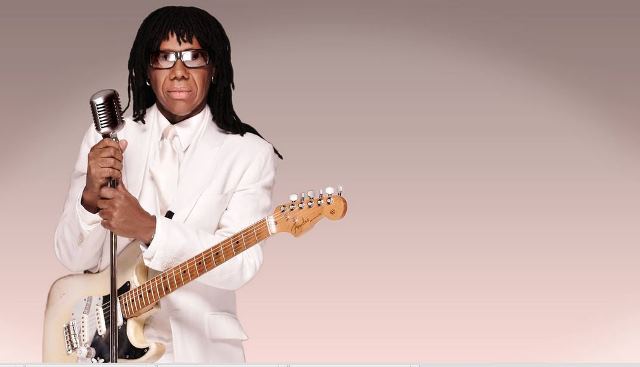 CHIC featuring Nile Rodgers played a gig in Limerick in 2013 that will be long remembered as one of the best live shows to happen in the city. The dance music legend has written, produced or played on $2billion worth of worldwide chart hits. Formed in 1976 by guitarist Nile Rodgers and bassist Bernard Edwards, Chic produced some of the best known and most influential hits of the disco era, such as ‘Good Times’, ‘I Want Your Love’, ‘Everybody Dance’, ‘We are Family’ and ‘Le Freak’.

Nile Rodgers collaborated on Daft Punk’s ‘Random Access Memories’ album. He co-wrote and played guitar on mega hit ‘Get Lucky’. Playing live these days, Chic include ‘Get Lucky’ and their most recent hit ‘I’ll be There’ in their set.
The Bernard Edwards bassline on ‘Good Times’ formed the basis of hip hop’s first major hit, ‘Rappers Delight’. Chic’s productions created hits for Sister Sledge, ‘We Are Family’ and ‘Lost in Music’. Chic’s collaborations with Diana Ross produced, ‘I’m Coming Out’ and ‘Upside Down’. Nile Rodgers produced and lent his funky guitar riffs to David Bowie’s ‘Let’s Dance’, Madonna’s ‘Like A Virgin’ and Duran Duran’s ‘Notorious’.

A Chic live show celebrates all these hits and is the best live disco party you will ever witness in the company of the musician that inspired so many disco, house and funk classics.
Chic made their Irish debut at 2009’s Electric Picnic playing to thousands in a heaving Electric Arena. It was the gig of the festival in many opinions. Since then regular festival appearances like Galway Arts Festival and Forbidden Fruit have cemented the band’s reputation as one of the best party acts on the circuit.
Chic featuring Nile Rodgers play Live at The Big Top, Limerick Milk Market on Tuesday November 10.

Find out about more concerts in Limerick here.