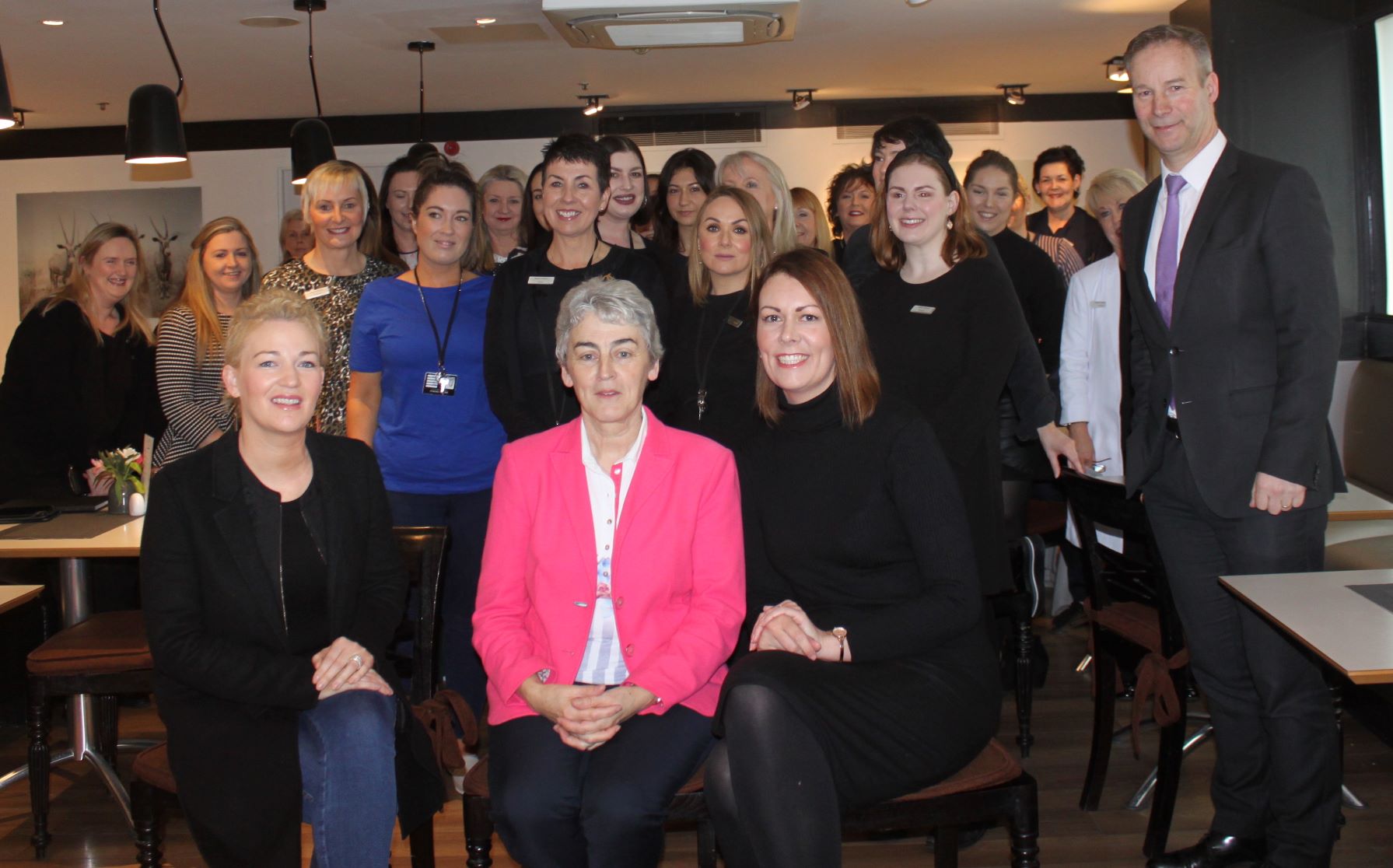 Childrens Grief Centre has been voted as a chosen charity by Brown Thomas and will be one of two charities, St Vincent De Paul being the other, to receive raised funds from staff fundraisers throughout the year. Pictured (L-R): Carol Fitzgough (volunteer), Sr Helen Culhane, (Director), Katrina Morgan (Fundraiser) and Liam Dwan, (General Manager of Brown Thomas) and staff from all store departments.

Childrens Grief Centre has been voted as a chosen charity by Brown Thomas and will be one of two charities, St Vincent De Paul being the other, to receive raised funds from staff fundraisers throughout the year.

Childrens Grief Centre will benefit from numerous staff fundraisers throughout 2019, and of course, the Christmas gift wrapping in December. Sister Helen Culhane founded children’s Grief Centre in 2009, with the aim to support children and young people between the ages of 4 to 18 years, who have been affected by the loss of a parent either from separation or death.

Katrina Morgan, Fundraising and Events Co-ordinator at Children’s Grief Centre, said, “This is our first charity partnership like this, and we’re very excited to be working with you all. As Helen mentioned about the state funding’s, we’re at 4% state funded and at the moment, our focus is on securing a new premise so that we can reduce the waiting list. Currently, we have two rooms that we work in, so we’re hoping to raise enough money through funding to move to a new premise, in the next year or so.”

Sr Helen Culhane, the Director of Children’s Grief Centre, said, “We were delighted to be chosen by staff members as Charity Partner for 2019 by an overwhelming majority.”

Sr Helen Culhane from @children_grief speaks about the great work that they provide! @brownthomas Limerick have voted the Children's Grief Centre as one of their chosen charities who will benefit from their fundraisers this year! #ilovelimerick #lovelimerick #lovinlimerick pic.twitter.com/WqxBDOTIRI

Sr Helen Culhane, Limerick Person of the Year 2017, founded the centre in 2009 and it has been providing support services for school-aged children and young people affected by loss through death, separation, and divorce in Mid-West Region. The Children’s Grief Centre sees around 300 children every week, aged 4 to 18 years. 70 per cent of the children who attend have separated parents while 30 per cent has suffered bereavement.

In 2018, Children’s Grief Centre received a €30,000 state funding from the HSE and Tusla, as to improve their services as well as to address the long waiting list in order to provide more families with needed supports.

It was the first time that the Children’s Grief Centre funding came from the state body.

There are approximately 30 volunteers attached to the centre in total. The volunteers include a retired career guidance teacher, a play therapist, psychologist, psychotherapist, and an art therapist.

The funding would hopefully be used to improve the working environment for staff in the centre. Sr Helen said that they are hoping to purchase their own premises, as there is no sufficient room to expand.

The Children’s Grief Centre funding boost will ensure countless children and their families are given much-needed support.

Children’s Grief Centre will also celebrate its tenth birthday this year by organising a conference on the theme of Supporting Children Through Loss Following Parental Separation, Divorce or Bereavement, on Friday, June 14.