By Richard Lynch on November 6, 2018@richanthon 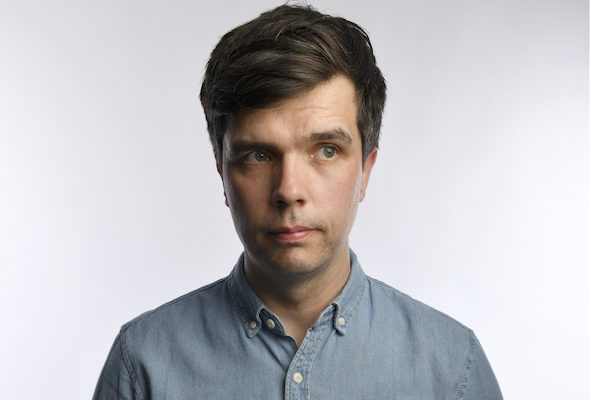 Cork comedian Chris Kent returns with his 6thsolo show “Looking Up” will be touring Ireland between Jan-March 2019 and coming to Limerick Feb 1st 2019 at Dolans.

Chris has spent the past year balancing comedy with being a stay at home dad and trying to grow a beard. He has also removed the word “mate” from his vocabulary as it takes too much effort to say in an Irish accent.

T.V. appearances include the RTÉ 2 panel show Next Year’s News, The Craig Doyle Show and Conor’s Dad in the hit series The Young Offenders. In the UK, he has appeared on Russell Howard’s Stand Up Central for Comedy Central.On radio he has been a regular panelist for the RTE Radio 1 show The Second Republic and a guest panelist on BBC’s The Blame Game.

Hailing from ‘The Rebel County’ (That’s Cork for anyone outside Ireland), Chris gave up the day job as an electrician to pursue his calling in comedy. He emerged onto the Irish comedy scene in 2009 after winning the Bulmers Nuttin’ But Funnycompetition.

In 2010 he was the recipient of the Comedy Smack Down Award at the Galway Comedy festival, and Winner of the Bulmer’s Nuttin’ But Funny Comedy Award 2009. Following on from being listed as “One to Watch” in The Dublin magazine’s “Red Hot and Rising” for 2012, Chris Kent was voted as one of the Top Five Irish Comedians by Hot Press Magazine in 2013.

In 2015 Chris made his UK TV debut on Russell Howard’s Stand Up Central. Shortly afterwards, he moved to the UK to try and establish himself on the UK comedy scene, where he has quickly become a favourite at some of the top clubs.

He brought his fourth solo show ‘Stop Stalling’ (‘Original, hilarious material, Among the best acts I’ve seen ★★★★★ The Mirror) to the Edinburgh Festival.
He returned home after once again miscalculating his final shop and leaving behind half a bottle of shower gel and a box of cornflakes (unopened), and taking with him only resentment for the landlord that charged seven times the rent for an apartment that couldn’t possibly have been up any more stairs

Tickets are on sale now from Dolans.