City and Cemetery – A History of Mount Saint Lawrence, launched in Limerick 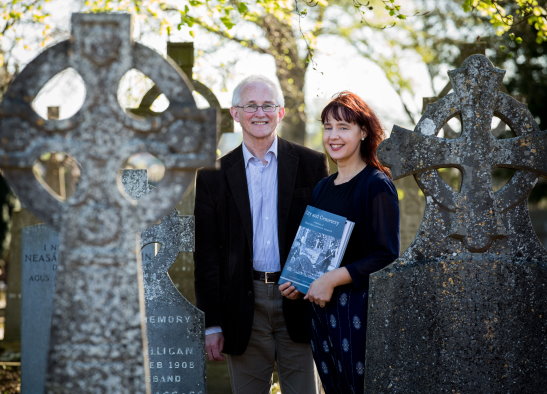 A comprehensive history of one of Ireland’s oldest and largest cemeteries has been launched in Limerick by Minister for Education and Skills, Jan O’Sullivan TD.

City and Cemetery – a History of Mount Saint Lawrence records the history of a graveyard which has been the primary place of burial in Limerick city since 1849 containing the remains of over 75,000 people.

Compiled by Limerick City and County Council historian Dr Matthew Potter and edited by Limerick archivist Jacqui Hayes, the publication forms part of a major joint project between Limerick Archives and Mary Immaculate College dealing with the history and heritage of the cemetery.  It contains many images donated by members of the public and also includes over 80 oral history interviews conducted with local people.

Limerick Archivist Jacqui Hayes said Mount St Lawrence, the second largest graveyard in the country outside of Dublin, is a repository of Limerick’s collective memory with intense emotional associations for generations of local people.

“The cemetery was initially developed when burial ground capacity elsewhere in the city was placed under pressure following cholera epidemics in the 1830’s and the Great Famine in the 1840’s,” she explained.

“It was written in the belief that a cemetery containing the remains of over 75,000 people also contains the history of Limerick. All sections of society, whether former mayors of Limerick or from the workhouse were buried here. This history examines the wider social aspects of how death is approached in Ireland using oral histories, the records of Mount St Lawrence itself and family photographs donated by the public.”

The 196 page publication is the result of a concerted effort by a large team of researchers to create the history of Mount Saint Lawrence. The book is framed by two overarching themes: firstly, the role of the study of ‘death and dying’ in Irish society; and secondly, the impact of social change since the late eighteenth century on death and its accompanying cultural practices.

Limerick Archives has already worked extensively with students and academics from the Geography and History Departments of Mary Immaculate College to create an online searchable database of Mount St Lawrence allowing members of the public, both at home and abroad, to locate information relating to their deceased relatives. An online map of all burial plots has also been created mapping the cemetery grave markers using GPR technology creating a unique learning and research resource while promoting the cultural heritage of the cemetery.

Historian, Dr Matthew Potter said it is fortunate that the records of Mount Saint Lawrence have survived as the history of the cemetery could not otherwise have been written.

“One of the most gratifying aspects of researching this book was the involvement of so many third level students, using the most advanced technology, such as digitisation and GPS mapping, in this significant public history project. These techniques, supplemented by a large number of oral history interviews have crystallised what Limerick people have always known instinctively, that Mount St Lawrence is a major cultural resource and hugely important to the history of Limerick.”

He continued: “Mount Saint Lawrence Cemetery has played a major part in the life of Limerick city for over 150 years. Studying all aspects of Mount Saint Lawrence through its registers, headstones, oral histories and newspapers leaves one in little doubt that, despite modernisation and social change, death and the cultural practices that accompany it continue to play a central role in Limerick’s history.”

City and Cemetery- a History of Mount St Lawrence is available for purchase in O’Mahony’s Bookshop, Limerick priced €20.