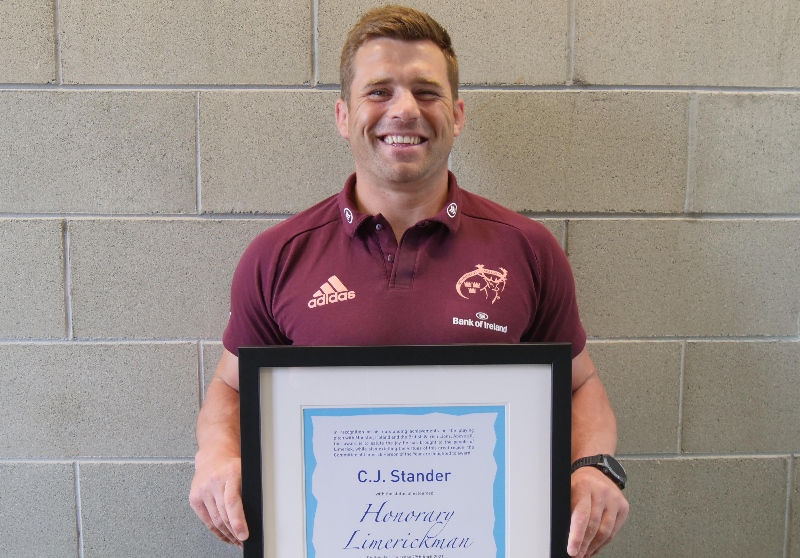 CJ Stander, a proud resident of Limerick since 2012, has been given the title as an Honorary Limerick Man at the Limerick Person of Year Awards, a fitting tribute to the back row rugby star who is retiring at the end of his current deal with Munster.

The 31-year old had previously been made an Honorary International Ambassador for Limerick in 2017.

Stander will be dearly missed next season as he plans to remain in South Africa after this Summer’s Lions Tour and live with his wife Jean Marie and their young daughter near his family home in George.

Stander was a fan favourite at Thomond Park for the past number of seasons and won the Munster Player of the Season award in 2015, 2016 and 2020, in addition to winning the Ireland Player of the Year in 2016.

The Castleconnell resident became eligible to play for Ireland at the end of October 2015 and was selected for Ireland’s 6 Nations squad marking his debut against Wales with a man of the match performance at the Aviva in February 2016. Stander later went on to start every game of the campaign, scoring his first international try against Italy.

Accepting the award, CJ said, “It is a big honour for me and my family.It has been a big, big pleasure living in a lovely city like Limerick. Thanks to everyone who made us welcome since day one and thank you for all the support you have given me personally and, secondly, as a team with Munster.”

All of us at I Love Limerick would like to congratulate CJ on this impressive title!

Finalists of Limerick Businesswoman of the Year Awards 2021 Announced