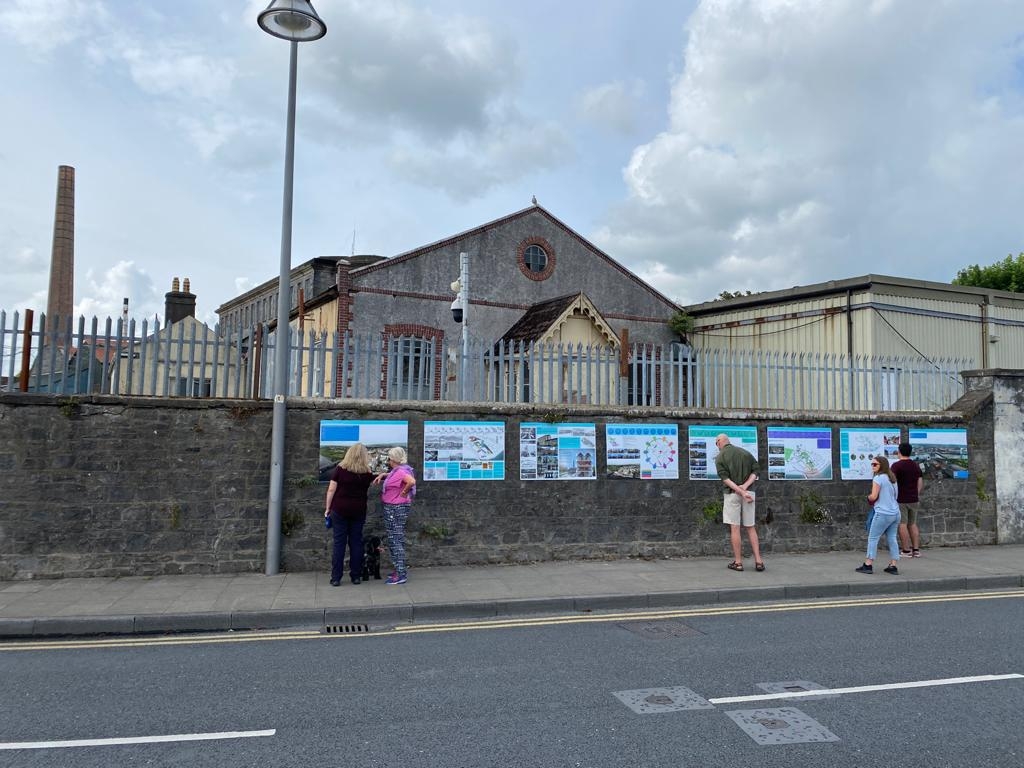 Cleeves Riverside Quarter masterplan for the development of the Cleeves Factory has been fixed to the walls surrounding the site. Picture: Richard Lynch/ilovelimerick

The total cost of the project is estimated at €250 – €300 million and delivery will take approximately seven years.

The vision for the site is described through several key principles, such as embracing the River Shannon and the history of the Cleeves site, creating a vibrant community quarter and enhancing biodiversity in the area.

The development of the sites original structure, the flax mill, is seen as an opportunity to kickstart the wider development of the Cleeves site. Limerick Twenty Thirty believes the flax mill has survived the past two centuries through bold vision – confidence in the value of the buildings and their ability to suit a new purpose. The company also understands the Cleeves Factory should remain as the iconic face of Limerick City.

There are constraints to developing the site, largely due to its age. Two areas of the site are protected structures, including the factory’s iconic chimney. Flood risks and surface-level changes are also an issue, due to the site’s proximity to the banks of the River Shannon.

“Cleeves will, ultimately, be a 2030 project. It’s going to take seven years to develop because of its size and, indeed, the sensitivities around the site. This is a historic site and there are even constraints beyond that which we have to manage,” acknowledged Limerick Twenty Thirty CEO David Conway.

Mr Conway said that while the southern side of the river has been the traditional ‘city centre’, Cleeves will extend the heart of Limerick across the river.

“We believe it will be a catalyst for further investment to follow so this is the start of something very significant, not just for this side of the river but for Limerick as a whole.”

Limerick Twenty Thirty will provide further updates and information on the Cleeves Riverside Quarter development over the coming months, with public consultation around the site set for early 2022.

As images of the newly revealed placards began to surface online, many Limerick locals were keen to voice their idea’s for the development.

“I would love to see St Michael’s Rowing Club and the area around it focus on sport & recreation, including public playing pitches, courts and riverside gyms,” said one Twitter user.

“I think for any development to be successful, there needs to be a residential anchor. Cleeves could and should include some high-end, open-plan apartments with views overlooking the river. Those residents provide consistent footfall for commercial units on the ground floor”, said another.

The iconic 10-acre site is divided into two sections that straddle both sides of the North Circular Road and O’Callaghan Strand. Constructed in the mid-nineteenth century, the factory’s chimney structure dominates the Limerick City skyline.

The Cleeves factory boomed with sales of condensed milk in the early 20th century, however it was Cleeves Slab Toffee that became the factories main output until its closure in 1974. Immortalised in Frank McCourt’s book Angela’s Ashes, Cleeves toffee is fondly remembered both in Limerick and across Ireland.