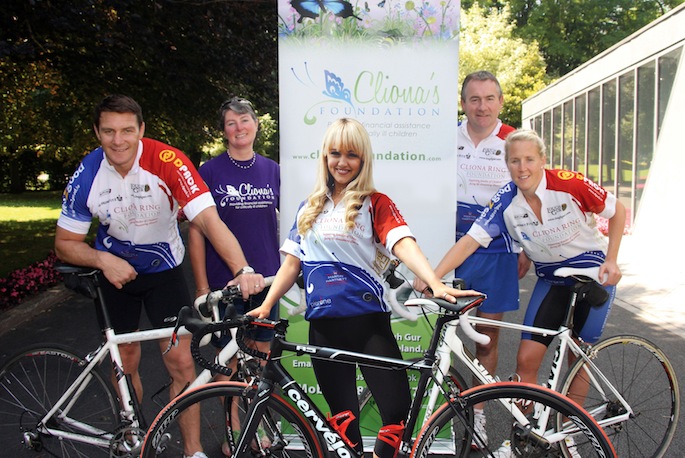 With three routes including an 8km for family and funsters, the organisers have appealed to experienced cyclists with a challenging 90km route and a 40km less arduous route for leisure cyclists. Following the cycle there was a BBQ, face painting, music and a bouncy castle to keep the entire family entertained.

So popular is cycling that Cliona’s Foundation has founded it’s own cycling club which is affiliated to Cycling Ireland and is gaining new members each week. This years’ cycle is expected to attract large numbers and particularly with three popular celebrities taking to their bikes on the day in support of the Foundation.

PHOTOS BY DOLF PATIJN FOR ILOVELIMERICK.COM 2013. ALL RIGHTS RESERVED. STANDARD DISCLAIMER – Sharing of images online by ILoveLimerick.com in no way licences the use of said images without the express Agreement from ILoveLimerick.com.

Cliona’s Foundation 6th Annual Charity Cycle was launched in Limerick by three well known celebrities who were delighted to be part of the event. David Wallace, Leanne Moore and Joy Neville have carved national and international fame in their own right and have supported Cliona’s Foundation over the years.

David Wallace, from Limerick is a retired Irish International Rugby player, who played for Munster, Ireland and the British & Irish Lions. Having made his Munster debut against Connacht in August 1997, he made his European debut in September 1998, played in all nine Munster games in the run to the 2000 final where he scored the only try of the game, won a runner-up medal in 2002 and winners medals in 2006 and 2008. He won his 200th cap in the Magners Grand Final, the last of his 86 Heineken Cup caps in that game against Ulster. David has just recently taken up cycling but added ‘I’ll probably need some help up those rural Limerick hills but for me it’s about being part of a wonderful event, the proceeds of which will help families in real need of some financial support’.

Leanne Moore, also from Limerick, is multi-talented as a singer, journalist, presenter and actress. As a freelance journalist Leanne currently contributes to a daily showbiz and entertainment section for TV3’s Ireland AM along with being the Showbiz Correspondent for TV3′s Xpose. Leanne also finds time to write a weekly feature for The Irish Sun and contributes to many National publications regularly. Leanne has recently added her name to Cliona’s Foundation as an Ambassador…’’I’ve always admired Brendan and Terry Ring and was only too happy to support this fun fundraiser and it gets me out on my bike. I’ve been very lucky in life and now would like to give something back to help others. Cliona’s Foundation is a remarkable Foundation and I hope to spread the word about the difference it has made and can make to families’.

Joy Neville has been part of the Ireland Women’s Rugby Team set-up over the past decade, having made her debut in 2003 against Scotland in the Six Nations as a fresh-faced 19-year-old. An experienced Ireland number 8, Joy hopes her side’s Six Nations success will provide a catalyst for the womens game to grow across the country.

Since then, the now Director of Rugby at Limerick Institute of Technology (LIT) has become a crucial component of Ireland’s continued growth on the international stage.

Joy is no stranger to the bike and recently participated in the Headless Horseman event also staged around Lough Gur which partnered with Cliona’s Foundation. ‘I’m looking forward to the cycle, the atmosphere and the community involvement with Cliona’s Foundation, I hope that by being involved, we can raise the profile and awareness of this unique Foundation which helps families all over Ireland with critically ill children with non-medical expenses’.

Speaking about the celebrity involvement in the Annual Cycle,  Brendan Ring, Founder of Cliona’s Foundation said ‘’We’re thrilled with the support received from these three amazing and positive professionals – their attitude to life and commitment to the Foundation has been incredible and definitely has an contagious effect! It never fails to amaze me how generous people are in lots of ways. We rely on these fundraisers to ensure that families with critically ill children can be supported with non medical expenses and in some way ease the financial stresses felt by these families.’’

Cliona’s Foundation provides financial assistance to critically ill children all over Ireland. Having been spotlighted last September by the RTE 1 Secret Millionaire Programme, the Foundation has recently secured TV presenter, Miriam O’Callaghan as it’s first ever Patron.  Founded in 2007 by Brendan and Terry Ring, in memory of their daughter Cliona who died of an inoperable brain tumour, Cliona’s Foundation has raised in excess of €350,000 already helping more than 150 families across Ireland.  Cliona’s Foundation receives no financial state support and relies on the generosity of the public for support and to ensure it’s continuity.

If you’d like to learn more about Cliona’s Foundation, donate or apply for financial assistance please visit www.clionasfoundation.com.