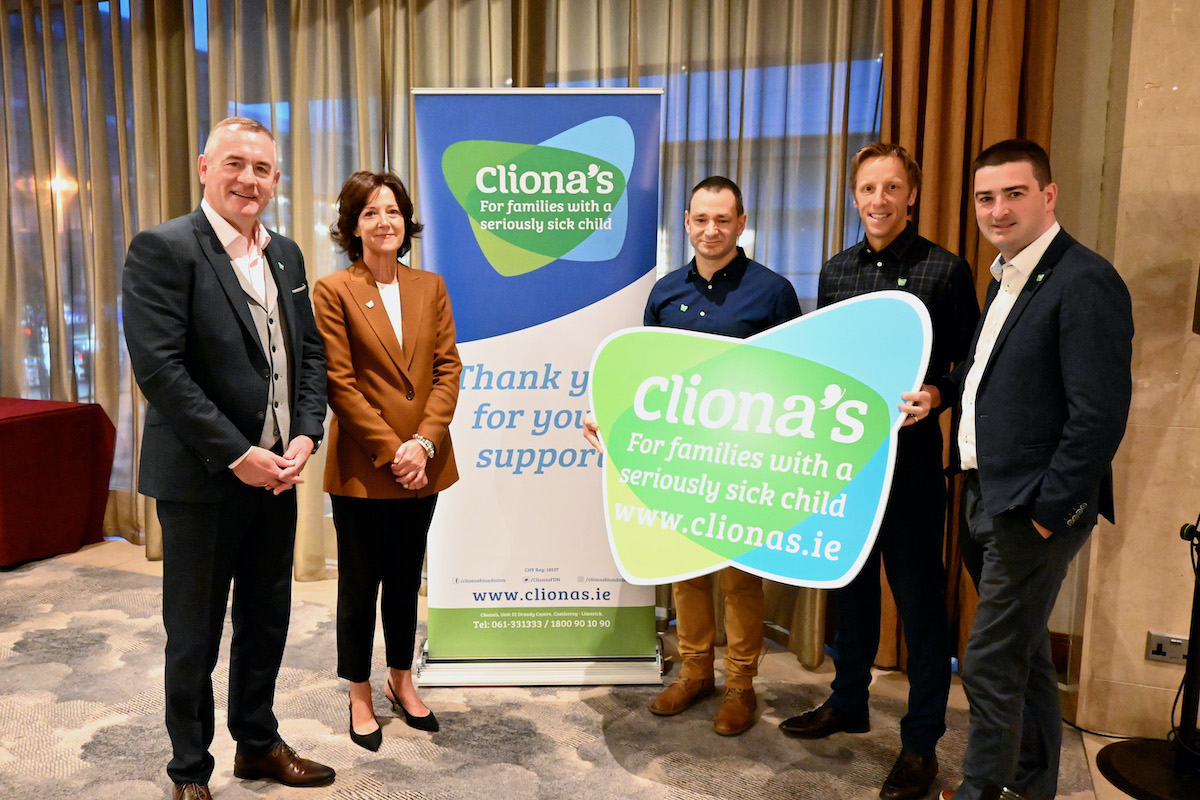 A panel featuring some of the most incredible people in the Midwest took place at a Clionas Foundation Networking Breakfast in aid of Cliona’s Foundation last Thursday. The breakfast was kindly supported by The Savoy Hotel. John McNamara, Vicki O’Toole, and Jim Warny shared their remarkable personal stories, with Liam Aherne doing an incredible job as moderator.

It was an early rise for the breakfast attendees. Co-Founder and voluntary CEO of Cliona’s Foundation opened the event with a moving speech about the thousands of families all over Ireland opening their own curtains bright and early, in their own homes, on that very same morning, getting ready to face a journey to a hospital for various types of treatments. Brendan re-iterated how it was more important than ever to help these families financially, specifically for the non-medical costs of caring for their children and also referred to the resilience and resolve that Cliona’s continually witness in the families they support.

Joining John on the Clionas Foundation Networking panel was renowned businesswoman Vicki O’Toole, Vicki is well known for overcoming many challenges in life and in business where she is managing director of JJ O’Toole Limited, Ireland’s oldest packaging company. Vicki was also an EY entrepreneur of the year finalist in 2018.

Attendees also enjoyed the privilege of listening to expert diver Jim Warny. Jim is an expert cave diver and has been diving in caves for over 20 years. He was born in Belgium but is now based in Co Clare. In a story that captured the world’s attention and hopes, the football team were trapped in a flash flood inside Tham Luang, 4km from the cave’s entrance.

All the boys and their coach were rescued from the cave by an international team including Jim who shared that it took two and a half hours to transport the boys through flooded, narrow sections of the cave in the dark using guide ropes, miraculously rescuing them all.

It was certainly an inspiring morning for all attendees. Guests enjoyed a delicious breakfast in the fabulous five star surrounds of the Savoy Hotel. There was an opportunity to network with other businesses, to hear the panellist’s personal stories on resilience and resolve and their insights into how we can all overcome challenges in our own ways.

Key takeaways from the wonderful morning full of energy, honesty, humour and optimism came not only from Brendan Ring’s address but also from the remarkable panellists.

“Fear is just energy that needs to be channelled” Jim Warny

“If you are not agile, you’re fragile “John McNamara

“See it, do it, finish it” Vicki O’Toole

Cliona’s have been helping families in Limerick, in the Midwest and all over Ireland, since 2008. To date the foundation has provided financial assistance for over 1,100 families. The relentless increase in inflation shows, now, yet again, families with sick children are disproportionately affected by situations out of their control, this time it is rapidly increasing living costs. These are parents who are in a living nightmare and the last thing they should have to worry about are bills. At least one parent for the most part must give up their job to care for their sick child leaving them struggling to cope. Studies have highlighted that a family will need between €10,000 and €15,000 a year to cover various non-medical costs while their child is ill.

Cliona’s Foundation expects at least 200 families will apply for financial assistance this year which sees a 20% increase on applications in 2021 and will need to raise a minimum of €500,000 to meet these applications. To learn more and to help please visit www.clionas.ie or tune in to the two-part documentary “Ireland’s Forgotten Families” which is available on our website. The documentary will air again on Virgin Media 3 over two nights Friday October 14 and 21.