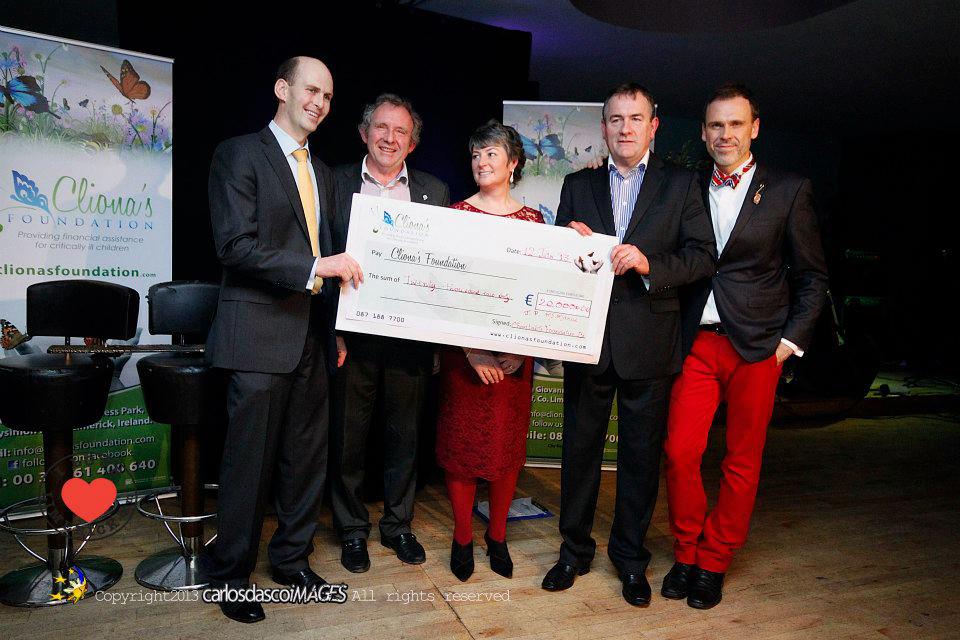 Cliona’s Foundation provides financial assistance for non medical expenses of critically ill children. The foundation is named after Cliona Ring who lost her very bravely fought battle against illness in December 2006. This past Saturday night they had their 6th Annual Fundraiser at Bulgaden Castle and they were joined by Richard Mulcahy from RTE’s Secret Millionaire programme documentary which aired last September featuring Cliona’s Foundation along with the other Limerick organisations spotlighted in the programme including the Organisation of National Ex-Servicemen, Our Lady of Lourdes Community Centre Weston and NOVAS Initiative Street Outreach (Soup run). Unbeknownst to the organisations approached by a seemingly ordinary chap whom they believed was a Producer doing a documentary, but who later revealed himself as the Secret Millionaire – Richard Mulcahy who was intent on helping those less fortunate than himself. Richard from an unassuming background, made his fortune in a number of areas including software development. Cliona’s Foundation, is very dear to my heart as I know the founders, Brendan and Terry Ring, having worked with them on a documentary for ILoveLimerick in the past. This documentary was seen by Richard the Secret Millionaire and this led him to help the Cliona Foundation. We are thrilled our video made a difference to such an amazing charity! Cliona’s Foundation was set up following the death of their daughter Cliona, from a brain tumour. Over the years, as Cliona underwent numerous different hospital treatments, Brendan and Terry were struck by the number of families, facing enormous financial hardship, they saw at first-hand the enormous toll it took on these families, already struggling to cope with the nightmare of having a seriously ill child and decided to take action by setting up Cliona’s Foundation. Since its launch in 2006, Cliona’s Foundation has raised in excess of €300,000 and has helped more than 100 families. Richard Mulcahy has supported Cliona’s Foundation in a mentoring capacity, helping to raise the profile of the Foundation and also helping to generate much-needed funds. Another special guest on the night was Mark Power of the JP Mc Manus Pro Am Committee who presented the well deserving Cliona Foundation with a check for €20,000! To learn more go to www.clionasfoundation.com.

Doras Luimní looks back on 2012