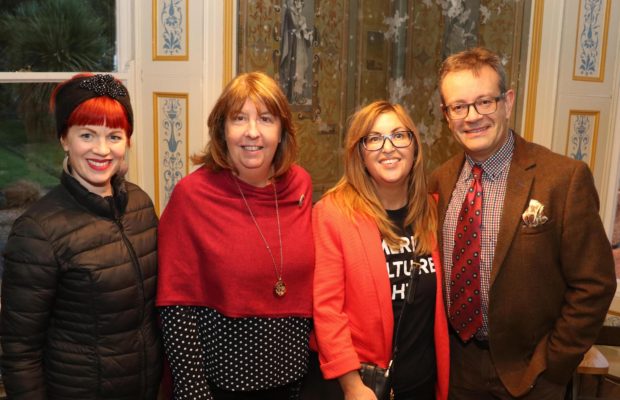 Tait House Community Enterprise have teamed up with Limerick’s oldest theatre company College Players to produce a night of One-Act Rehearsed Readings which will take place on Friday 12th April at Tait House in Southill.

A College Players open casting call for auditions will be held at Tait House for budding actors from the Limerick community who wish to take part in what has been pitched as a ‘fun and friendly experience’.

Speaking at the launch of the event, Dave Griffin, Chairman of College Players, said: “Over recent months we have developed a very strong working relationship with Tait House Community Enterprise. For our 2018 production, ‘Blithe Spirit’, we were kindly given use of some of the Tait House facilities to rehearse and we were also delighted to hold a short rehearsed reading of the play on Culture Night in September. The planned rehearsed readings are the next step in our relationship and an opportunity for us to give something back to the Tait House community”.

A similar event took place in Tait House for Culture Night last September where College Players performed a rehearsed reading of scenes from the play ‘Blithe Spirit’. According to College Players, the rehearsed readings are a fantastic opportunity for anyone with an interest in theatre or live performance to get a taste of how a theatre production is put together.

Each cast will be guided by a director from the College Players team – namely Dave Griffin, Padraig Hastings and Nigel Dugdale. “The purpose is essentially to introduce the Tait community to the world of Drama through performance, and of course, to have some fun in the process!”, Griffin says. “The participants will work with a light-hearted script and, together with their cast, will bring this to life for an audience. They will work with an experienced team of directors and actors with the ultimate goal of creating a live theatre experience in front of a friendly, supportive audience”, he added.

Tracey Lynch, CEO of Tait House, notes that this new initiative is a fantastic addition to many varied social enterprise projects already happening under the Tait House umbrella.

“Issues around confidence or public speaking are consistently raised by participants in the various training or upskilling programmes we facilitate. Working with College Players has allowed us to embrace the arts as a means of addressing such issues in a fun and friendly space”, she said. “We are inviting people from all walks of life to consider taking part in the rehearsed reading in April. The performances will be an opportunity for all involved to entertain an audience, develop confidence skill and to work with a fun script and to experience the magic of theatre in a relaxed and friendly environment”, Lynch added.

They were overall winners of the 1995 All Ireland Drama competition with Franz Kafka’s ‘Metamorphosis’ dramatized by Stephen Berkoff and also toured the United Kingdom and Japan with this production. College Players intend to bring exciting theatre to the people of Limerick. Its mission statement is to encourage, develop and deliver quality theatre experience.

Tait House Community Enterprise (formerly known as Southill House) has a simple brief: to serve and ensure the growth of its community through enterprise, training and education. Tait House is a community development co-operative whose mission is to generate enterprise, employment and training opportunities through the provision of services for the people of Limerick.

For further information about the College Players Open Casting Call you can contact Tait House directly on 061 415340, by emailing [email protected] or by clicking here.
For other stories featuring Tait House, click here.