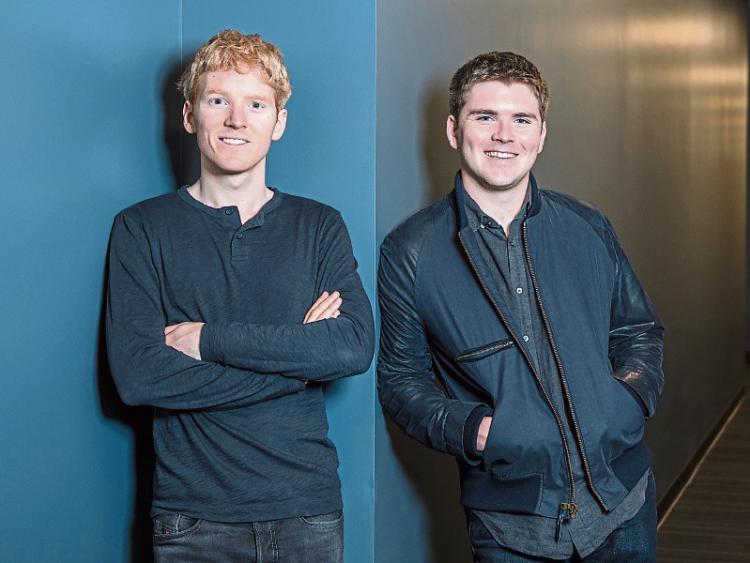 Pictured: the Collison Brothers, co-founders of the company Stripe, who have made Forbes Billionaires List

Limerick’s most famous brothers have made the Forbes billionaires list for the first time.

The Collison brothers from Castletroy, now based in California, have seen their wealth reach into a whole new stratosphere, with younger brother John, 26, becoming the world’s youngest self-made billionaire.

The Irish duo, which ranks in joint 1,795th place, each has an estimated fortune of $1.1 billion as their online payments firm Stripe had a $9.2 billion valuation last year.

There are now eight Irish billionaires on the prestigious Forbes list.

The Collison brothers are the two eldest, technological whizz-kids sons of Lily and Dennis Collison. Patrick was born in 1988, and brother John was born in 1990. The youngest brother Tommy is a journalism student in New York.

The brothers are back in the news again, as they’ve just made the Forbes billionaires list for the first time, while John has the added prestige of being the world’s youngest self-made billionaire

Extremely hard-working, here is how the two brothers managed to climb their way up the business world.

From 1997 to 2003, John Collison attended the Centre for Talented Youth at DCU, where he studied laboratory medicine, maths and journalism from the age of seven. In 1998, his brother Patrick began learning computer programming, taking his first course at the University of Limerick at the age of 10.

In 2007, the brothers founded Shuppa, which later became Auctomatic, a software company that built tools for the eBay platform. Auctomatic was acquired for $5 million by the Canadian company Live Current Media in 2008, making them overnight millionaires at the age of 17 and 19

John finished secondary school at Castletroy College in 2009, receiving 8 A1s and 2 A2s grades in his Leaving Certificate. He then commenced his studies at Harvard University. He was accepted to five US universities, including Stanford and MIT. John was one of only three Irish students to be accepted to Harvard that year. Patrick attended MIT and both dropped out of college when they got the technological itch

It was 2010 that Stripe, their online payments firm, was founded. It now supports credit card payments in more than 130 different currencies. Valued at $9 billion (€8.48bn), it employs more than 600 people globally and operates in 25 countries. By 2012 the brothers had a combined wealth of €8 million, according to The Sunday Times’ Rich List

In 2014, the brothers said they have no plans to sell their billion-dollar business, a mantra they continue to repeat. “We’ve no interest in selling the company. John and I are very lucky to work with the people we do on building something for the long-term, and we wouldn’t like to change that,” said Patrick.

Two years later, they became the world’s youngest self-made billionaires, worth at least $1.1 billion, after an investment in Stripe from CapitalG and General Catalyst Partners valued the company at $9.2 billion

This year the duo helped to drive a $220,000 fundraising campaign to fight US President Donald Trump’s anti-immigration policies. Stripe described Trump’s actions as “morally wrong, economically damaging, and harmful to America’s global stature. Immigrants are a vital part of the American economy, way of life, and place in the world.”

The Sunday Times’ Rich List estimated their combined wealth to be in the region of €2.4 billion, the fourth richest in Ireland, even ahead of JP McManus, who has an estimated wealth of €1.079 billion

Finally, the pair entered the Forbes billionaires list for the first time, while John has the added prestige of also being the world’s youngest self-made billionaire

“We are both single. Our dating lives are about as interesting as our downtime. There’s not a whole lot happening. We’re pretty frickin’ boring,” said Patrick.

“Learning is food to John. He was never a swot, he just doesn’t see any boundaries between school and life – it’s all learning and it’s all good,” said a relative.

To find out more about the Collison brother’s company Stripe, click here.

To read more about the achievements of the Collison brothers, click here.