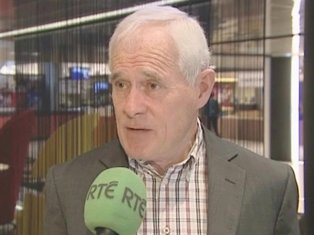 Colm Doyle helped broker peace in former Yugoslavia, negotiated cease-fires in the city of Sarajevo, testified against Slobodan Milosevic in 2003, General Pavle Strugar in 2004, Radovan Karadzic in 2010 and General Ratko Mladic in 2012 and oversaw peace missions for the United Nations.

This is the third lecture in the five-part series which been organised in conjunction with UL’s Kemmy Business School and the support of LIT and Limerick Council.

Colonel Colm Doyle retired from the Defence Forces in 2007 after 42 years service. During his career, he served in a wide variety of appointments both at home and abroad. His appointments included Director of Public Relations for the Defence Forces, Commandant of The United Nations Training School Ireland and Commandant of the Military College. He is a former Commanding Officer of the 12thInfantry Battalion, Limerick.

He has extensive experience in overseas service. These included tours of duty with the United Nations in Cyprus, Lebanon, The Middle East and New York. He commanded the 82nd Irish Battalion in Lebanon in 1997, during which he hosted the visit of Irish President Mary McAleese.

He is a former head of the European Union Monitoring Mission for Bosnia in 1991 and returned there as Personal Representative of the Chairman of the International Peace Conference, Peter Carrington during the lead up to the war in 1992. He was directly involved in negotiating cease-fires in the city of Sarajevo and in particular, securing the hostage release of President Izetbegovic.

Colonel Doyle was selected by the United Nations to serve as Chief of Staff of the Military Division in the Department of Peacekeeping Operations, New York from 2004 to 2006. He was responsible for the day to day operations of 17 United Nations Missions across the world.

He has assisted the International Criminal Tribunal for the Former Yugoslavia in The Hague since 1995, testifying as a prosecution witness at the trials of Slobodan Milosevic in 2003, General Pavle Strugar in 2004, Radovan Karadzic in 2010 and General Ratko Mladic in 2012.

Colonel Doyle holds a Masters Degree in International Studies from the University of Limerick. He has appeared on national TV and radio as a military commentator on the conflicts in The Balkans, The Arab Spring, North Korea, Gaza, Chad, Syria and Islamic State. He is periodically a panellist on The Marian Finucane Show commenting on international issues and has been a guest lecturer at third level institutions. In 2009 he was invited to present a paper at the Royal Irish Academy’s International Conference on ‘A responsibility to Protect’, the dilemma of state sovereignty over military intervention. He is currently Chairman of the JFK Memorial School Board of Management in Limerick City.

He has written a memoir of his time in Bosnia under the title “Witness to War Crimes: The memoirs of a peacekeeper in Bosnia”. It is published by Pen & Sword in the UK and in Ireland by IAP/Merrion Press.

Other speakers in the series have included Paddy Cosgrave, Web Summit and Emma Kennedy, Founder, Kennedy Analysis.  On November 1, Professor Peter Bishop, University College London and Allies & Morrison Architects, will talk about urban design and planning and on November 15, Conor O’Clery, journalist and writer, will complete the line-up and talk about Putin and Russia.

The lectures run on Thursday evenings from 11 October to 15 November in St. Munchin’s Church. Lectures start at 8 pm and admission is €10 or concessions €8 per lecture. Proceeds from the series will be used by the Limerick Civic Trust for the restoration of St. Munchin’s Church into a military museum.

Tickets are available online at www.eventbrite.ie. Tickets are also available from The Limerick Civic Trust offices in the Bishop’s Palace, Church Street, 061 313399 or on the door on each of the nights.