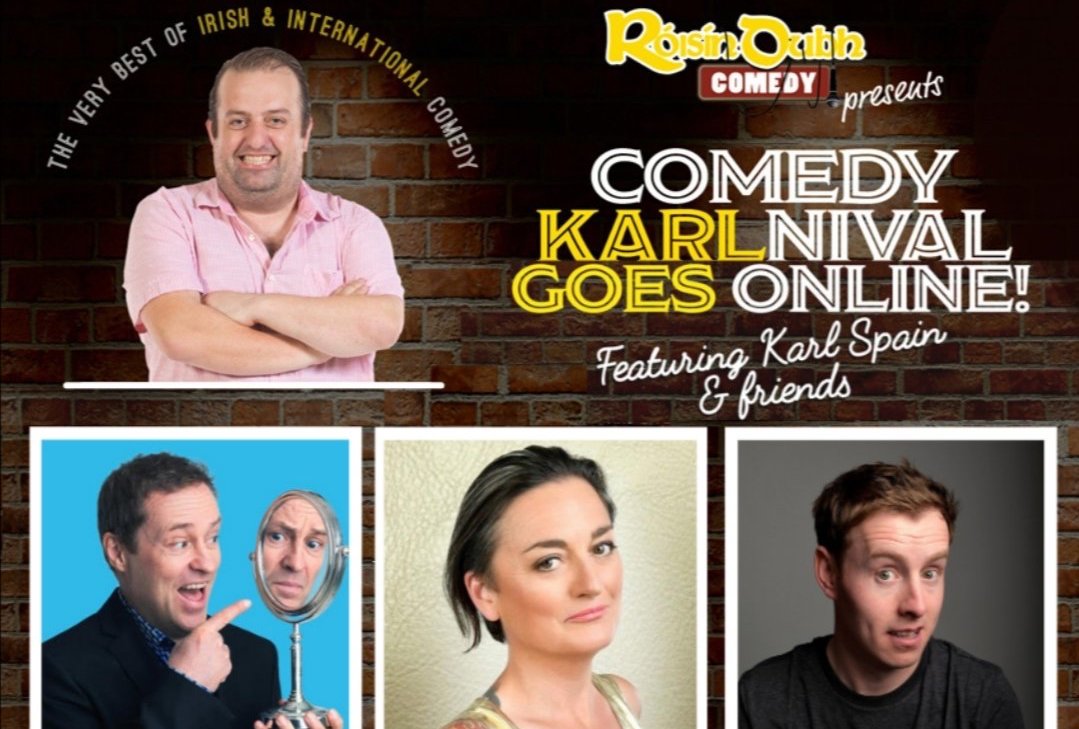 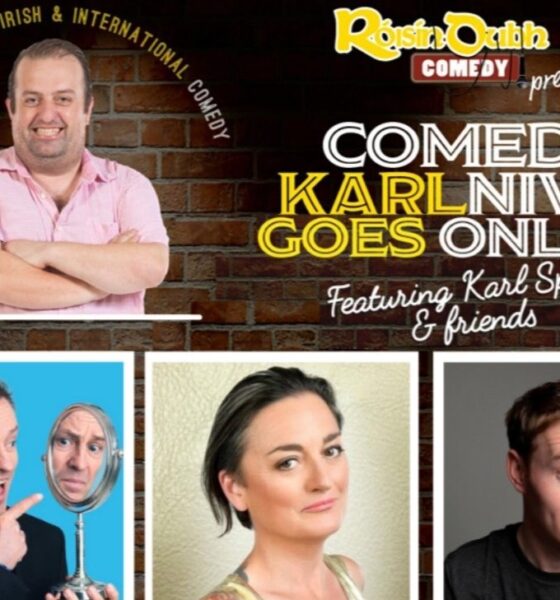 Comedy KARLnival Online with Karl Spain & friends on Friday, March 19, live from Sound to Light Studio in Galway. Featuring Ardal O’Hanlon (Father Ted / My Hero / Death in Paradise) Zoe Lyons (Mock The Week / Have I Got News for You / QI) and Andrew Ryan with the host Karl Spain.

Renowned, even amongst the bitter ranks of his fellow comedians as a master, Ardal’s technique and demeanour set him apart from other acts. Ardal is a Galway festival favourite and indeed a favourite at every festival he plays He has a comic brain par-excellence which can reduce any audience to helpless tears of laughter. He is justifiably one of the most popular stand ups of his generation.

A highly acclaimed stand up, Ardal has toured to sell out audiences internationally (including extensive live work across the US, Canada, Australia, Far East and Europe), released two top ten stand up DVDs (Ardal O’Hanlon Live and Ardal O’Hanlon Live in Dublin) and headlined Live at the Apollo and Michael McIntyre’s Roadshow.

…Skilfully handled running jokes, his manipulation of a capacity crowd is just as impressive. -The Daily Telegraph

‘…a brilliant comic mind working away to get the most out of every superbly sharp line.’ –Timeout

Zoe is undoubtedly one of the hottest talents on the international circuit, having performed from Melbourne to Mumbai and Auckland to Andover! In 2021 Zoe hosted her own game show, Lightning, on BBC 2.

As well as appearing on Have I Got News for You, Qi, Celebrity MasterChef and being a series regular on Mock The Week, Zoe’s extensive TV credits also include Live at the Apollo (BBC1), The Apprentice: You’re Fired (BBC2), Room 101 (BBC1), Hypothetical (Dave), Dave Gorman’s Terms and Conditions Apply (Dave), Pointless Celebrities (BBC1) and she was a winner of Celebrity Mastermind (BBC1).

She is also a familiar voice on Radio 4 including The News Quiz, Just a Minute and The Unbelievable Truth.

He has appeared on many TV shows in the UK & Ireland including Russell Howard’s Good News (BBC3), Best of the Edinburgh Festival Live (BBC3), The Blame Game (BBC1), and Live at The Comedy Store (Comedy Central).

“Ferociously intelligent, Ryan is a great writer. Charming, hilarious and accessible with some really powerful thinking underneath it all.” THE SKINNY

There are two types of tickets for this show.

There’s nothing to it really, you just watch the show from 9pm on our live stream.

You will be sent the link 30 minutes before your start time.

Be a part of the action, join the video call and provide the laughs, LIVE. (Very limited number of tickets)

With this ticket you are asked to have your mic and camera on, so you’re visible to the comedians & occasionally our live stream audience and your laughter adds to the atmosphere of our show. You also get access to an extra 30 minutes of banter pre-show from 8:30pm in the “Green Room” with Karl Spain.

Related Topics:comedykarl spain
Up Next

The Bedford Townhouse & Café launches Live from The Parlour

Lee James releases new single ‘To the Ones’ on March 19