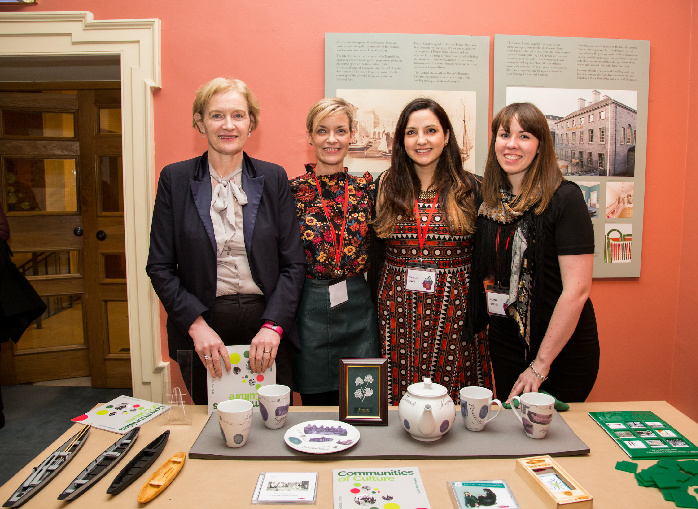 The Communities of Culture Phase II 2015-16 Report was launched last Thursday event at the Hunt Museum’s ‘Big Ideas Camp’. This two-day community engagement conference provided a very relevant launching pad for this report, which outlines projects from 2015 and 2016 delivered by the Hunt Museum in collaboration with community groups of all ages residing in the City’s northside and southside regeneration areas.

Communities of Culture is a Hunt Museum community engagement and outreach programme which has been running since 2014 and is funded by Limerick Regeneration Agencies. It enables the exploration and sharing of the distinctive experiences, perspectives and heritages of communities residing in each of Limerick’s regeneration areas – Southill, Ballinacurra Weston, Moyross and St. Mary’s Park. 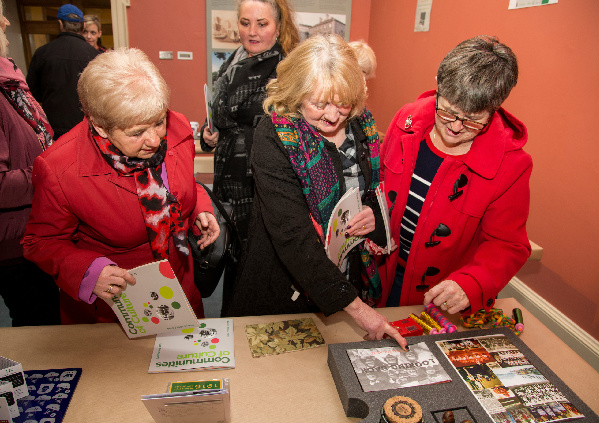 The most recent phase of Communities of Culture 2015-16 saw two separate but complimentary projects being delivered. These included ‘The Loan Box’ project and the ‘In Fairness’ project which Maria Cagney, Curator of Education at the Hunt outlined at the launch. She concluded her overview of these projects by announcing that the resources produced through the ‘Loan Box project’ will soon be made available to community groups and schools so that they can learn about these histories. She also gave a flavour of what to expect from Phase III (2016-17) of the project which will soon commence, revealing that a range of bespoke training opportunities will be made available to project participants, enabling them to facilitate loan box sessions using these historical and cultural resources. This information was well received by the many project participants present, which included Southhill Women’s Group and St. Mary’s Parish Men’s Shed.

Eileen Humperies, speaking on behalf of the project funder, Limerick Regeneration Agencies, highlighted the value for money and the positive impact Communities of Culture was making in regeneration communities. She specifically noted the role Communities of Culture had played in the cultural revitalization of these areas, a point which was then elaborated on by Monica Spencer, the next speaker at the launch. Monica emphasised the overlap and commonality between Communities of Culture and other creative initiatives and networks operating in the city, including Creative Communities, of which she is co-Chair. She explained their role in mobilising local communities, including artists, so that they can lead the way in making Limerick an inclusive, creative and more vibrant place for all to live.

For the last few years, The Hunt Museum has been working at the forefront of community engagement initiatives in the city, delivering creative and innovative projects such as

Communities of Culture in collaboration with a range of community partners and third level institutions. The ‘Big Ideas Camp’ which ran last week at the museum enabled its staff and project partners to share their knowledge and experience in this field but also to create a space for community engagement practioners to come together to find solutions to problems they regularly experience. Practioners working in community development, youth services, adult education and even artists working in socially engaged practice were some of those whom attended. Maria Cagney of the Hunt Museum noted afterwards “not only did the camp assist us to troubleshoot issues we as community engagement practioners regularly experience, it also enabled us to network, to identify overlap between our work and to find new ways to collaborate in the delivery of community projects. There was a tremendous amount of expertise present at this conference. It was hugely successful to the extent that The Hunt Museum will consider making the ‘Big Ideas Camp’ an annual event.

Communities of Culture has become an integral element of outreach and programming at The Hunt Museum and will continue to foster and develop relationships between communities in Limerick city and county as the initiative evolves with each subsequent phase.