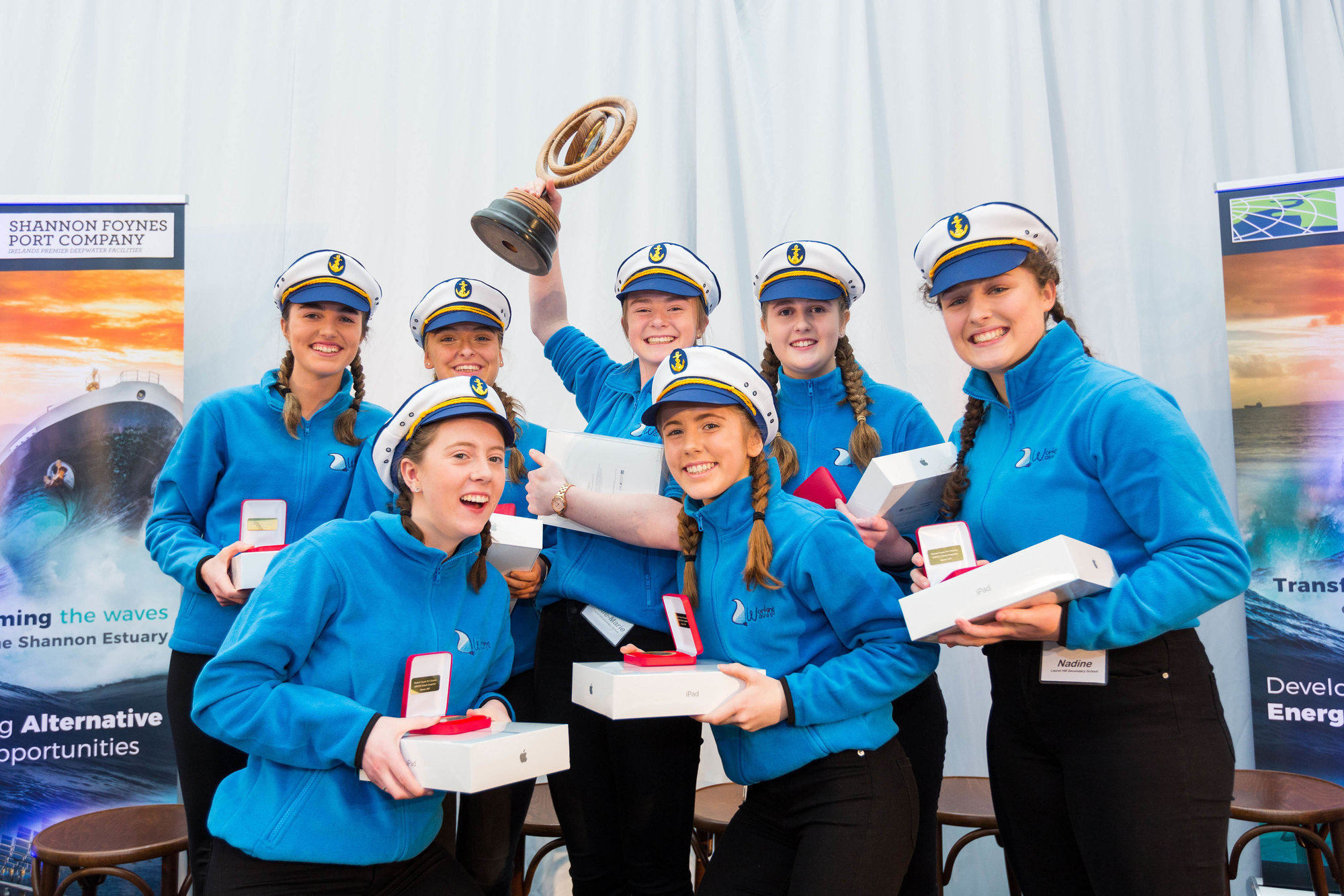 Innovation was in rich supply today at one of Ireland’s great maritime commercial hubs, Foynes, as schools presented ground-breaking concepts for sustainable energy sources of the future at the biennial Shannon Foynes Port Company (SFPC) ‘Compass’ TY competition. Laurel Hill Secondary School walked away with the honours thanks to their ‘Working Waves’ presentation based on generating energy from ships on the move through a pressure pad system that feeds into an electricity generator and battery in the hull.

But, as judges highlighted, the competition was the most tightly marked, the most competitive and delivered the highest standards in its six-year history. The Limerick city school, who were presented with their award by Minister of State at the Department of Finance Patrick O’Donovan, was one of five finalists who presented in front of 300 people at the Foynes Flying Boat & Maritime Museum today.

They walked away with the top prize of the perpetual trophy, a €2,000 cheque for their school and iPads & COMPASS gold medals for each of the team members. All runners up received a COMPASS silver medal and a sailing day on the Shannon Estuary sponsored by the Foynes Yacht Club Sailing Academy.

The four other finalists were outgoing champions, Salesian College Pallaskenry, with their concept for harvesting seaweed for biomass production; Coláiste Mhuire Askeaton, who proposed transforming Foynes Island, just 100m or so from the pier at Foynes. into a major wind energy farm; John the Baptist Community College, Hospital with a project called ‘Wishy Washy’ based on a Tidal Turbine Power generating plant on the Clare estuary shoreline; and Causeway Comprehensive School, Co. Kerry with their proposal for a tidal turbine station to power the proposed Shannon LNG gas plant at Ballylongford.

Said Laurel Hill team leader Aoife Marie Costello: “We’re just delighted. We put so much work into this, since last September – during class, after school and we’re so happy with ourselves. We were jumping for joy when we won and then it dawned on me really and I started to cry. None of us have ever won anything like this before. It’s a great feeling.”

This year’s Compass TY competition was based on the theme ‘Transforming the Waves of the Shannon Estuary – Developing Alternative Energy Opportunities’ and the students responded with what special guest John Kiely, manager of All-Ireland senior hurling champions Limerick described as “brilliant ideas and brilliant teamwork.”
He said: “This is a fantastic competition and it was a privilege to be here today. I come from the other side of the county so I wouldn’t have known as much about what happens here as I now do after watching these presentations today. Shannon Foynes Port Company has definitely tapped into a need here to spread the awareness within the region of the opportunity that’s here. It’s so important that we do that because if it fulfils its potential, we can keep people in the region, keep communities alive, keep GAA clubs alive. It’s a win-win for everyone.

He added: “I was just so impressed with the students themselves. They showed incredible courage, incredible confidence. They gave us brilliant ideas and brilliant presentations. My message to them was to follow their dreams and ambitions and if this is the type of ambition they have, the future is very bright.”

Minister Patrick O’Donovan said that the students had responded brilliantly to a major call to arms in society today – our environment. “The presentations had one common thread, that our climate is changing and we have to do something about it. These students are showing the type of engagement and intent that is going to force the rest of us to change our habits and look at new technologies.”

SFPC CEO Pat Keating stated that “We’re so proud of the students. We started out this competition to raise the awareness of the Shannon Estuary and it’s definitely ticking that box. The attendances are growing every year and the students are coming up with brilliant ideas. We were blown away with the level of innovation this year. They’ve really raised the bar.”

MEP Sean Kelly also commented that “This is such a great competition. They got the theme so right this year as the students were focussed on coming up with ideas for sustainable energy uses along the estuary in the years ahead. That’s a brilliant message to get out because we all have to do something about climate change. We all got our eyes opened today with these ideas.”

For more information on the Shannon Foynes Port Company and the COMPASS TY competition, click here.