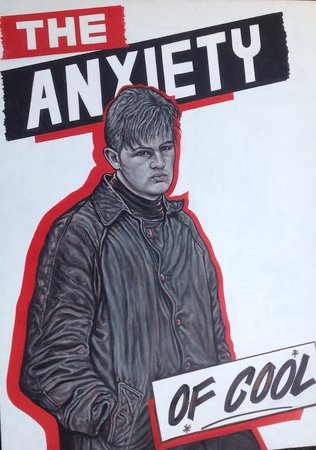 Limerick Printmakers are proud to announce the opening of The Cool Vernacular, an exhibition of new work by emerging Limerick based artist Jim Furlong.
The exhibition will be officially opened in the Belltable, 69 O’ Connell street, Limerick on Thursday 11 May from 6 pm and will continue until Saturday 27 May.
Aine Nic Giolla Coda, Programme Leader of the Limerick School of Art & Design(LSAD) painting department will open the exhibition.

Jim Furlong is the recipient of the 2016/17 Tom Fox Painting Award, an accolade bestowed on an outstanding graduate of LSAD’s Painting degree program each year.
The Fox family has kindly supported this bursary over the last five years as a way of commemorating the Limerick based painter Tom Fox’s life and untimely passing in September 2010.

A talented and prolific artist, Tom Fox exhibited extensively both nationally and internationally.

The award was generously created in Tom’s name by the Fox family with the aim of supporting and encouraging a graduate painter from Limerick School of Art and Design (LSAD) in the early stages of their career. The prize facilitates the artist by providing a prominent solo exhibition in a well-established gallery space with support from the LP team. Limerick Printmakers are proud to host this exhibition in conjunction with the Belltable as part of its annual exhibition programme. The award has become an integral part of Limerick Printmakers remit and one that reinforces Limerick Printmakers ethos of supporting artists working within various visual art disciplines.

Since this event and the growing importance of the teenage consumer market, the question of what is and what is not cool is no longer merely a topic for discussion among insecure and rebellious teenagers

In March 1999 the Levi Strauss Company in San Francisco, the world’s largest and best known Jean brand and purveyors of denim fashion to generations of cowboys and teenagers, was forced to shut down half its U.S manufacturing plants and lay off 6,000 workers. Why?

The reason given was a massive slump in sales, trading figures had revealed that the Levi brand had lost 50% of its market share between 1990 and 1998. These figures were only the symptom of a deeper and more important cultural and social malaise afflicting the brand. Levi Jeans were no longer perceived as cool. Since this event and the growing importance of the teenage consumer market, the question of what is and what is not cool is no longer merely a topic for discussion among insecure and rebellious teenagers. It has also increasingly become the focus of corporate boardrooms, influencing the marketing strategies of all the brands supplying the teenage market for consumer products, from computers games, soft drinks to running shoes. Share prices and profits are now subject to this ephemeral and what could be considered trivial distinction occupying the minds of teenagers. Companies now send ‘Cool Hunters into the urban ghettos to infiltrate subcultures and discover and influence the latest notion of cool.

What is now considered cool is and will always be a passing fad, however, the search for the latest notion of cool by corporations and brand leaders has now become a universal phenomenon that has an important influence on all our institutions from the media to education. The newly elected Labour government in 1997 promoted a modern conception of Britain with slogans such as ‘Cool Britannia’.

There is also an ominous side to the pursuit of cool, increasingly like all aspects of contemporary society, cool and allied notions of dissidence and rebellion have undergone a process of commodification. The cool vernacular exhibition explores the existential crisis faced by the individual who inhabits the modern commercialised environment and finds themselves alienated within this world of mass-produced constantly changing desires and aspirations. Longings and dreams that are manufactured to become constantly obsolete. Marketing disguised as dissension and rebellion, the world in which brands colonise and commodify our mental space in order to satisfy the bottomless appetites of the self. A customised self constantly seeking enhancement through the compulsive search for differentiation through excessive consumption.

The cool vernacular exhibition is an attempt to create a narrative on the subject of the commodification of cool and cultural dissidence. In an age of information overload, I believe the artist is often forced to create a Metanarrative which reflects his own personal experience and observations. These experiences and preferences become the bricks that go into the construction of this narrative. The artist creates a model for organising these experiences, and this model may invariably become a style or message. Subliminally underlying this style or message is the meeting of both the psychological and intellectual dynamics of individual creativity, with the primary forces of contemporary society. Through this process, art becomes the artist Edward Hopper stated “the outward expression of the inner life of the artist”. I believe through this process a subjective or personalised truth is created. This exhibition does not endeavour to present any kind of objective truth concerning the commodification and commercialisation of present-day society, but rather to create a symbolic and emblematic truth on the subject of the cool vernacular.