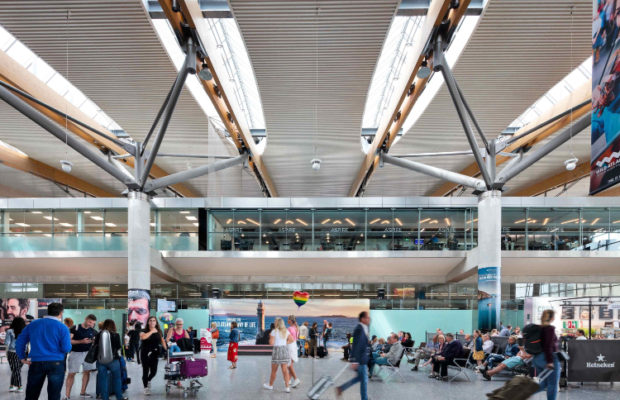 Passenger numbers at Cork Airport, which is Ireland’s fastest-growing and most punctual airport, have increased by 9% to just over 2 million in the first nine months of this year.

Cork Airport welcomed its two millionth passenger of 2019 last weekend and had further good news in recent days with service expansions from both SWISS and TUI for next year.

Passenger numbers at Cork Airport, which is enjoying its fourth consecutive year of growth, are expected to hit 2.6 million by the end of the year, which would be an 8% increase for the full year. Traffic has already increased by 16% over the past three years and this year’s stellar performance means that passenger numbers will have increased by 25% in four years (2.1m in 2015 v 2.6m expected in 2019).

“Passenger numbers at Cork Airport are thriving and it is the fastest growing airport on the island of Ireland in the first three quarters of this year,” said Cork Airport Managing Director Niall MacCarthy. “We have already announced six new routes and service expansions for 2020 and we are expecting more good news in the next few weeks for 2020, which will further increase consumer choice into and out of Cork.

“Airlines are increasingly choosing to place new business at Cork Airport as they see a commercial return from an efficient and strong airport. We intend, with our experienced and professional local management team working with the strong backing of daa group, to retain the mantle of Ireland’s fastest growing airport into 2020. This is despite the undoubted challenges which lie ahead with Brexit. Twelve new route announcements in as many months and further growth announcements in the past week by Ryanair, SWISS and TUI all point to strong airline confidence in the market we serve right across the South of Ireland”.

SWISS has this week announced the expansion of its Summer 2020 season to Zurich. The airline will operate four flights per week — on Monday, Wednesday, Friday, and Sunday — commencing March 29 and running until October 20. This is a 15% increase in capacity versus Summer 2019 with an additional 4,400 seats on offer and an expansion to 30 weeks from 27 weeks.

Meanwhile, TUI will increase its capacity by 11% at Cork Airport next summer and will operate three times weekly, using its own chartered aircraft under its own brand. In 2020, TUI will operate a new service to Lanzarote, and continue existing routes to Reus and Palma. This brings TUI to 31,500 two-way seats next year, up from 28,500 in 2019.

“We are thrilled to see SWISS and TUI expand their services and increase capacity from Cork Airport again next summer,” Mr MacCarthy said. “This is a testament to growing operator confidence in the markets served from Cork Airport.  We are confident that these extended seasons will further add to Cork Airport’s impressive growth to date, attracting, even more, holiday and business visitors to the South of Ireland region for 2020.’’

Last week, Ryanair announced a new Summer 2020 service from Cork to Katowice, Poland. The twice-weekly service is an extension of its Winter 2019/20 schedule route, commencing in October. The airline’s Winter schedule also includes an additional four new services to Alicante, Budapest, Malta and Poznań. Ryanair’s passenger numbers at Cork are forecast to rise by 23% in 2019, the largest increase among all Irish airports.

There are over 50 routes on offer from Cork Airport to the UK and Continental Europe. Multiple daily long-haul connections worldwide through major European hub airports also continue to drive Cork Airport’s growth.

Cork Airport is the international gateway to the South of Ireland and is uniquely positioned at the start of Ireland’s Ancient East and the Wild Atlantic Way. It is the country’s second busiest and best-connected international airport with connectivity to over 50 routes, flying to destinations across the UK and Continental Europe. Over 2.6 million passengers are forecasted to pass through Cork Airport in 2019, its fourth consecutive year of growth, up +8% on 2018.  In 2017, and again in 2019 Cork Airport has been named Airport Council International (ACI) Best Airport in Europe in its class (serving under 5 million passengers) and is one of the world’s friendliest airports. Global aviation analysts OAG revealed that Cork Airport topped the punctuality league for international airports in Ireland in 2018, with an on-time performance of 80.2%. Cork Airport also scooped the Best Use of Facebook at The Moodies awards in March and the award for Best Twitter In House at the 2019 Social Media Awards (Sockies).