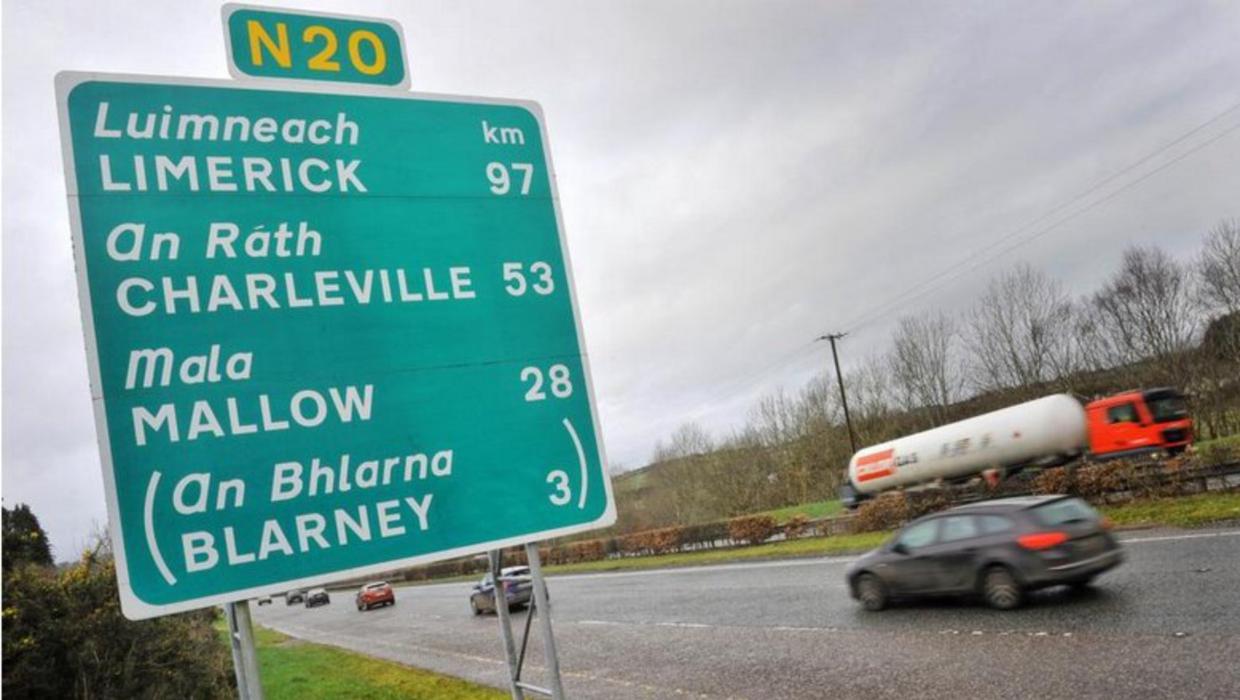 Details of the preferred transport solution for the N/M 20 Cork to Limerick project, identified as a priority investment in the Government’s National Development Plan 2021-2030, have been published today (30 March 2022).

A multi-modal transport project which includes active travel infrastructure for walking and cycling, improvements to public transport, new and improved safe road infrastructure and environmental integration for communities along the N20 transport corridor between Cork and Limerick, is now proposed.

The Cork to Limerick projectroad design, including cross section, road type (Protected Road or Motorway), junction strategy and accommodation works will be developed during the next phase of the project, within the 500m wide preferred road-based option, published on www.corklimerick.ie.

The preferred road-based option broadly follows the previous 2010 M20 Cork – Limerick scheme. Between 30% and 40% of the existing N20 road will be reused to develop the new dual carriageway.

The project will have a major impact on the attractiveness of public transport, achieving intercity journey time savings of up to 30 minutes for express bus services between Cork and Limerick and improving journey times and reliability for local bus services along the N20 corridor.

Additionally, the project examined a range of rail-based options and has recommended the development of a ‘no change’ additional hourly rail service between the two cities, via Limerick Junction, reducing intercity rail journey times by over 20 minutes between Cork and Limerick.

The new rail service is being recommended by the project team for consideration within the All Island Strategic Rail Review.

Minister for Transport, Eamon Ryan TD, stated: “Today’s announcement is an important step forward in progressing a range of transportation solutions connecting Limerick and Cork as identified in the Government’s National Development Plan 2021-2030, that will incorporate public transport and active travel infrastructure for walking and cycling from its inception, as well as to the upgrading of national road infrastructure which will deliver needed safety improvements for all users. We look forward to hearing the views of the public now and to the project being delivered.”

Minister of State, Hildegarde Naughton TD, stated: “Delivering on Government’s commitment to improve connectivity between Limerick and Cork and will benefit all road users. This project is critical for our regional connectivity, will improve travel times and will significantly enhance road safety on what is a well-travelled route.”

The impact of the integrated proposal will be “transformative and far reaching”, according to Dr. Pat Daly, Chief Executive of Limerick City and County Council which is progressing the project in partnership with Cork County Council, Cork City Council, Transport Infrastructure Ireland and the Department of Transport.

“The importance of this project has long been acknowledged as critical for the delivery of proper connectivity between the second and third cities in the country and along the Atlantic Economic Corridor. It will have a significant impact on economic development and on public transport efficiency and reliability. It will reduce traffic congestion and help to re-shape and re-energise communities in towns and villages which will be freed from through traffic. It will promote active travel on a scale not previously seen and most of all, will improve road safety on one of Ireland’s most dangerous roads,” he said.

Dee Ryan, CEO of Limerick Chamber commented “Today represents a significant step forward in improving regional connectivity in Ireland and developing an effective counter-balance to Dublin.  The decision to take a multi-modal approach is welcomed by the business community who are aware of the importance of decarbonising and welcome the proposed investment in rail and active transport solutions together with significant road investment.

Connectivity is a cornerstone for business development and economic growth, and to that end Limerick and Cork Chambers have long advocated for improvements in journey times and accessibility between our two cities.  In 2017 we jointly commissioned a study to examine the possible benefits of the investment.  Analysis revealed those benefits to include a projected decrease in annual road accidents, time savings on journeys, increasing the labour force size within a 45-minute commute of large employer centres and the expansion of catchment area of Shannon and Cork airports as well as Foynes Port.

Once delivered, this safer, faster and more direct solution to connect Ireland’s second and third largest cities will effectively open up the west of Ireland by improving journey times all the way up to Galway. “

“The option selection announced today represent more than just plans for a road, it represents plans for a unique transport corridor made up of rail, road and active travel options including a greenway. The inclusion of a greenway, which is anticipated to be the largest and longest in Ireland, will add to the existing greenway infrastructure already in place or under construction and will add value to the regional tourism offering.

The next phase is for the project deliver team to consult with local land owners, businesses and wider communities.  It is crucial that we now keep the momentum going.”

For other stories on Cork to Limerick go HERE

For more information on the Cork to Limerick project go HERE