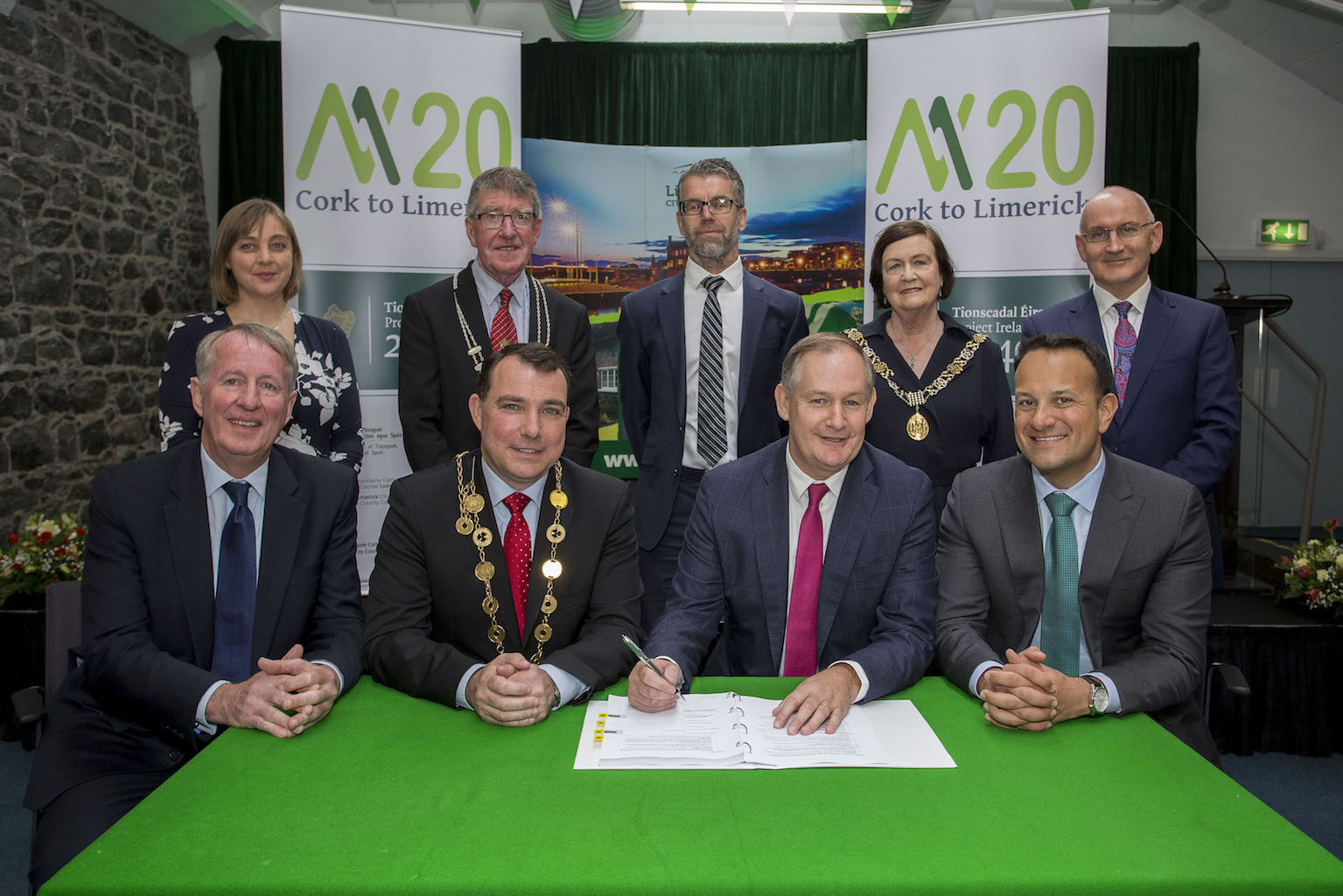 The Contract has been awarded for the biggest infrastructure project outside of Dublin- the N/M20 Cork to Limerick Road Improvement Scheme.

Limerick City and County Council, as lead authority for the massive project, has appointed Barry Transportation, and its project partners WSP and Sweco, as Technical Advisors to progress the scheme up to the stage where it will be submitted for planning.

The Taoiseach Leo Varadkar was present for the signing of the contracts.

Limerick City and County Council is working in partnership with Cork County Council, Cork City Council, Tipperary County Council, the Department of Transport, Tourism and Sport and Transport Infrastructure Ireland on developing the N/M20 Cork to Limerick Road Improvement Scheme, which is part of Project Ireland 2040.

Project Ireland 2040 states that an opportunity exists to provide better connectivity between the two cities by improving the quality of the transport network which will address road safety issues associated with the existing N20 route and provide for safer and more efficient journey times.

The two cities are approximately 100 km apart yet at present the economic interaction and inter-relationships between the cities are limited with poor transport connectivity being a factor.

Once completed the second, third and fourth cities of the country (Cork, Limerick and Galway) will be connected through a quality transport network.

Planning and design will commence this month, with Barry Transportation, WSP and Sweco, providing all engineering, environmental, economic and appraisal services required to deliver the project through these planning and design phases.

As part of these phases, there will be extensive public consultation taking place.

Mayor of the City and County of Limerick Cllr James Collins said “This project is critical for the economic development of Limerick and the wider region along the Atlantic Corridor. It will save lives and improve the quality of life for those who rely on this transport corridor for business, work, study and tourism.”

Limerick City and County Council welcomes the appointment of the Technical Advisors.  Together with our partners in the local authorities in Cork and Tipperary, the Department of Transport, Tourism and Sport and Transport Infrastructure Ireland, we are committed to delivering this major national infrastructural project.”

Liam Prendiville, Managing Director at Barry Transportation said “We are delighted to be working with Limerick City and County Council on the planning process for this vital arterial route, which will improve journey times and journey time reliability between Cork and Limerick”.

A Project Office has been established in Lissanalta House, Dooradoyle, Limerick V94 H5RR.

For more stories on development in Limerick, click here