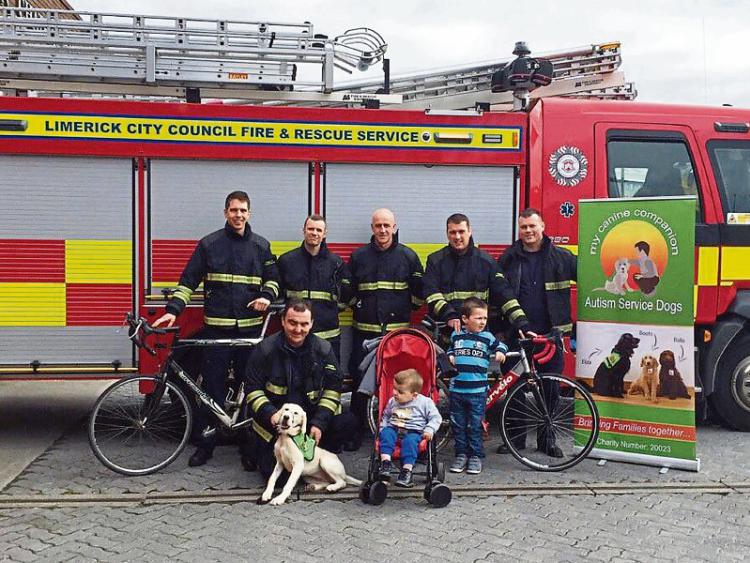 Members of Limerick Fire and Rescue Service cycled more than 640km, for charity, over the May Bank Holiday weekend. The lengthy cycle for My Canine Companion, an autism service, raised more than €13’000.

Mike’s son’s with their buddy Emmy, supporting their dad and the cycle for My Canine Companion

The team of fire fighters cycled a total of 642 km, from Mizen head in Cork, to Malin Head in Donegal. It took a total of 22.58 hours of cycling at an average speed of 27.5 km per Hour.

According to Autism Ireland, 1 in 100 people in Ireland are on the autism spectrum. The neuro-developmental disability is very close to team member, Mike Mooney’s heart.

The main aim of the cycle was to raise funds for helping ‘Emmy’, a labradoodle pup. Emmy is in training to become a fully vetted canine companion to Mike’s two sons, Ronan aged 6 and 3-year-old Darragh, who are both on the autism spectrum. Mike felt very strongly about completing the cycle to raise much-needed funds to support his family pet and companion, while creating awareness for the amazing charity and service, My Canine Companion. Mike described how the extremely skillful dogs help many people with disabilities, autism in particular.

The cycling team covered their own costs for the journey and held bucket collections along the way. The Civil Defence sponsored a minibus, meaning 100% of the funds raised from the cycle for My Canine Companion are going directly to the charity.

After some much-needed rest, the crew took to Facebook, expressing their thanks to

everyone who helped with the cycle, charity collection, online donations and sponsorship, “Thanks for all your good wishes and support over the past few days”.

They also used the social media to make their amazing announcement, of raising over €13,000 for My Canine Companion, autism service dogs.

The team on their cycle for My Canine Companion

Further donations to the cause can be made here

Read about some of I Love Limerick’s charity work here