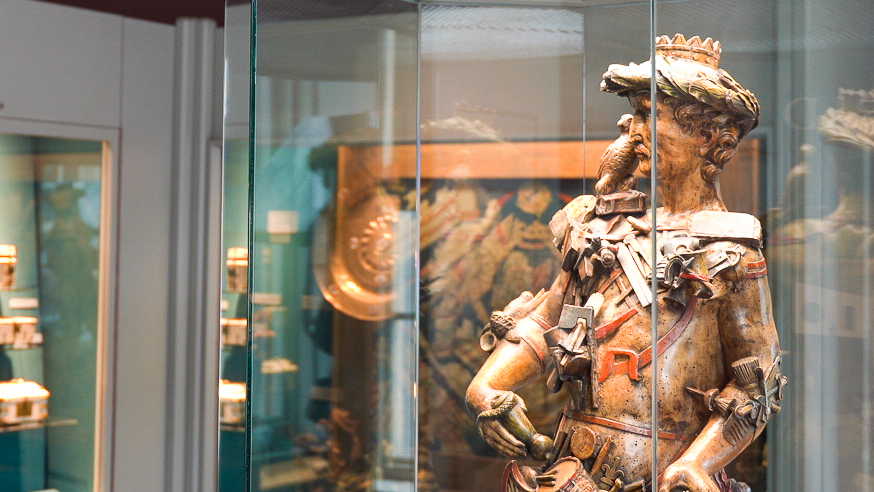 Dancing Apollo – Through the wonders of augmented reality, experience Apollo as never before, dancing, and captivating Hunt Museum visitors this Heritage Week

Pictured above is the sculpture of Apollo, the Classical god of light, poetry, music, healing and prophecy, often used to represent trades, arts and professions.

The Hunt Museum’s 17th Century statue of Apollo has been fascinating visitors to the museum for years. Now, they can see him and interact with him like never before. This year for Heritage Week he is going to dance around the Captain’s Room.

Through the wonders of Augmented Reality and the use of some new tablets you can enjoy a new side to Apollo, God of Light, Poetry, Music, Healing and Prophecy.

As well as marvelling at his moves, you will learn about the motifs he sports such as the Wine Merchants on his knee and the Locksmiths on his shoulder. You can then follow a Hunt Museum trail that highlights objects that link to the trades and professions on Apollo.

Apollo was often used to represent the trades, arts and professions. He is their protector and many of their crafts and manual skills are represented on the Polychromed Limewood, Augsburg (Germany) made statue.

Using the museum’s own tablets, visitors can scan a QR code located in the Captains’ Room in the museum and bring Apollo to life. Apollo was often used to represent the trades, arts and professions. The augmented reality (AR) Dancing Apollo will be able to tell visitors about the various professions represented on his body, such as the Wine Merchants on his knee, or the Locksmiths on his shoulder.

Not only this, with some music, and some AR, Dancing Apollo will show visitors, not only has he got the trades covered, he’s also got the moves! There’s something for all ages to enjoy with this project and it allows people to experience Apollo like never before.

Afterwards, visitors can go on a trail highlighting objects from the Hunt Museum’s Permanent Collection that are linked to the trades and professions on Apollo.

Jill Cousins, Director of the Hunt Museum says: “ We are always looking for ways to bring our artefacts to life for new audiences and generations. Having created a 3D model of our Apollo statue last year we had the basis to free him from his case and create the disruptive interaction with him that augmented reality can give us. Working with Alan and Uvis has delivered just that. From a learning aspect we hope that everyone looks at him anew and becomes engaged with all that he represents. AR makes Apollo a very cool dude!”

The Augmented Reality Makeover is the work of Alan Dormer and Uvis Zviedris, creative technologists who have also worked on a range of projects in the theatre,arts and cultural sectors. We contacted Alan Dormer at the University of Limerick to discuss possible projects earlier in 2021.

Alan commented: “ We are so pleased to be working with The Hunt Museum on this project. While still in its early days, Augmented Reality technologies allow us to push the boundaries of traditional experience and offer us new and exciting ways to engage with cultural artifacts and spaces.”

This project is a partnership between the Hunt Museum and Alan Dormer and Uvis Zviedris, creative technologists who have also worked on a range of projects in the theatre and arts sector.

For more information and to book tickets, see HERE

For more stories on the Hunt Museum, see HERE

Related Topics:heritage week
Up Next