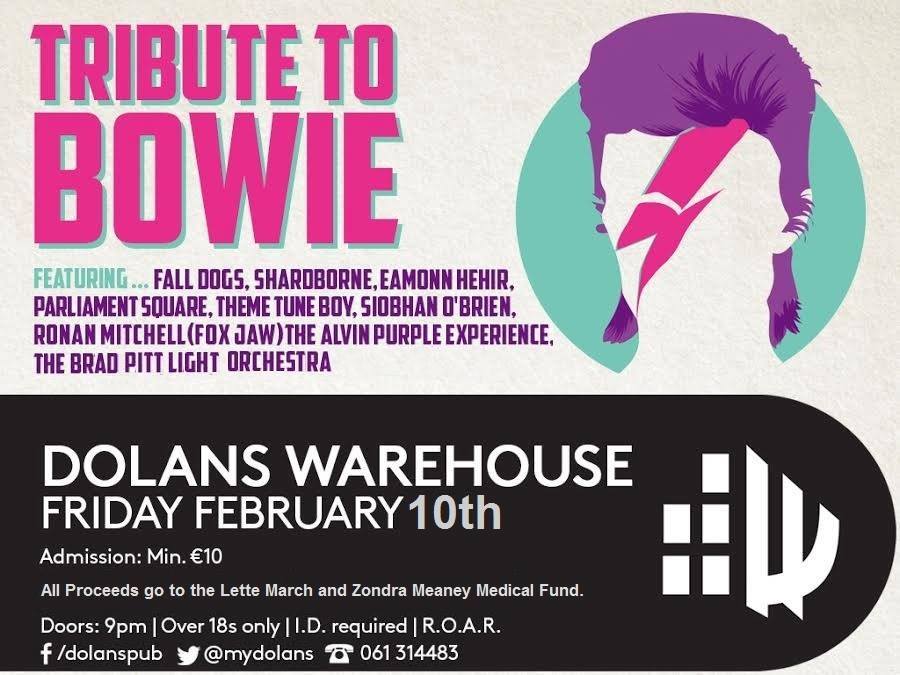 David Bowie Tribute Fundraiser For Zondra Meaney and Lette March. Details of the Event available in the Poster.

The fundraiser, organised by John Steele, will feature acts such as Fall Dogs, Shardborne, Eamonn Hehir, The Brad Pitt Light Orchestra and more. John has been organising a Bowie Tribute event every year with his band, Fall Dogs. After Bowie’s death last year, John decided to donate the proceedings of the event to Milford Hospice. After being offered the use of Dolan’s Warehouse by Mick Dolan, last year’s event quickly sold out.

For Bowie’s first year anniversary, John decided to get more bands together and donate the proceedings to the Lette March and Zondra Meaney Medical Fund. John spoke about the fundraising event stating “This year, I decided that it would be a great thing to ensure that it goes to two really brave and beautiful women who are fighting a battle against an illness that can’t be treated here.”

He added “Lette March and Zondra Meaney are two really brave people who I greatly admire. They are not only fighting EDS and POTS but they are actively creating awareness about the illness and its treatment in”

Zondra and Lette both suffer from Ehlers-Danlos Syndrome (EDS), a rare connective tissue disorder, as well as a host of secondary disorders. Specialist treatment is required as EDS is a rare syndrome. Unfortunately, there is no specialist in Ireland able to treat to condition and the Government will not cover Zondra and Lette on the treatment abroad scheme. Because of this, Zondra and Lette are forced to travel to London for treatment.

Zondra suffers from EDS but also has a brain disorder called Chiari and atlantoaxial instability and autonomic dysfunction all which were diagnosed through testing only available in London.

Zondra spoke about needing to travel for her vital treatments “I travel to London every three months to a lot of different specialists for treatment. I am going again in march and this trip alone is costing €10,000.”

She added: “I’ve been travelling since 2014 now to four different hospitals for specialist care none of which is funded by the government everything has been self-funded and fundraised through events over that time.”

Through the fundraising event on February 10, John Steele and the acts performing are hoping to raise the funds needed to provide Zondra and Lette with their treatment. All proceeds will be kindly donated to the Medical Funds and will hopefully cover a portion of their travel expenses. The event will begin at 9 pm on Friday.