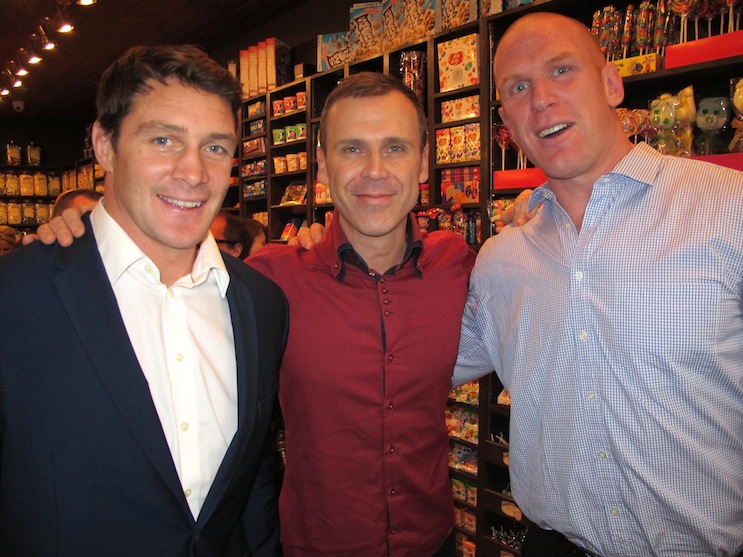 David Wallace was born on July 8 1976, in Limerick. Wallace is a retired Rugby star who has played for Munster, Ireland and the British and Irish Lions.

Wallace made his Munster debut against Connacht in August 1997.

His first taste of silverware with Munster came against Scarlets in the Celtic Cup Final in May 2005.

Wallace was part of the Munster team that won the 2008–09 Magners League.

Wallace made his Ireland debut against Argentina on 3 June 2000.

Three lengthy injury-enforced absences hindered Wallace’s international development. He only played in five games for Ireland until returning to start in the Triple Crown victory over Scotland in the 2004 Six Nations Championship — scoring a vital try in the process. He started again in both tests in 2004 against South Africa. He did not return again to the Irish side until the second test against Japan in June 2005, where he scored his fourth international try.

He was present during the 2006 Six Nations Championship and the Summer Tour in June.

Wallace scored a try for Ireland in their 43–13 demolition of England in the 2007 Six Nations Championship, and his form saw him selected in Ireland’s squad for the 2007 Rugby World Cup in France.

He was a member of the Irish Grand Slam winning side in 2009.

Wallace played in all 5 of Ireland’s 2010 Six Nations Championship games and won the Man-of-the-Match award against Italy. Wallace was in outstanding form for Munster throughout the 2009/10 season, and was selected in Ireland’s squad for the summer tour to New Zealand and Australia. He played against South Africa, New Zealand and Argentina during Ireland’s 2010 Autumn tests, and became Ireland’s most capped back-row player. Wallace played in all five of Ireland’s 2011 Six Nations Championship games.

Wallace was selected in Ireland’s training squad for the 2011 World Cup warm-ups in August, and was also selected in the final 30-man squad.

He toured Australia with the 2001 British and Irish Lions following in the footsteps of his brothers Richard and Paul. He played against NSW Country Districts, and scored a try against ACT Brumbies.

On 21 April 2009, Wallace was named in the British and Irish Lions squad for the tour to South Africa.  He started the first and second tests, and came on as a substitute for the third.

Wallace announced his retirement from rugby on 3 May 2012, due to the knee injury he suffered in August 2011. Wallace had made a comeback from the injury, but a re-occurrence of the injury forced him to quit the game.

In 2012 the retired rugby star tapped into his entrepreneurial side and opened Mr. Simms Olde Sweet Shoppe in the Crescent Shopping Centre.

The Rubberbandits – Limericks most loved