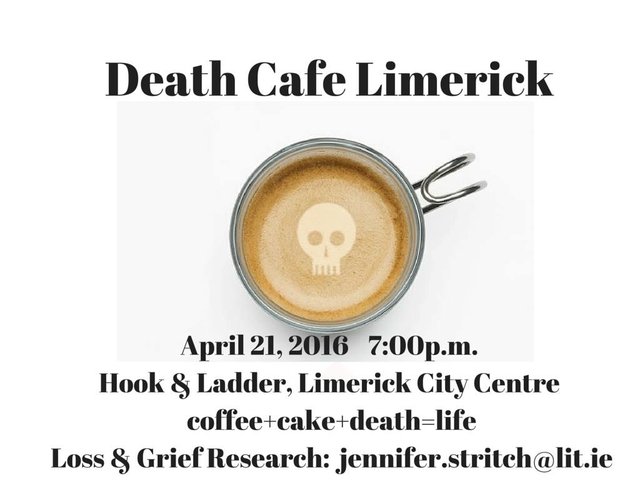 Cake and Conversation at the April Death Café Limerick

After a very successful first event in November 2015, the next Death Café Limerick takes places on Thursday, April 21, from 7 pm to 9 pm, at Hook and Ladder Café, Sarsfield Street, Limerick.

Death Café Limerick invites participants to join together to eat cake, drink coffee and tea, and share their thoughts, questions and experiences about death, grief and loss. The first Death Café event was organised by Dr. Tracy Fahey of LSAD, Jennifer Moran Stritch of LIT and artist Sinead Dinneen.

“We were actually overwhelmed by the response we got,” says Moran Stritch, who is coordinating this event. “We had an idea that people in Limerick wanted a place to talk with others about death in a positive, celebratory and relaxed way, but I don’t think we imagined that well over 130 would attend on the night.” The April Death Café, which is open to anyone over 18 years of age, will be held in the downstairs area of Hook and Ladder and will allow for open conversation along with some informal activities and discussion.

Death Café Limerick takes place at The Hook and Ladder

So, what’s a Death Café really like? The experience appears to be as individual as the people who attend them. “Last time we had an emphasis on facilitated art exercises with Sinead Dinneen and students from LSAD that allowed people to explore ideas around death”, Moran Stritch, a lecturer in the Department of Applied Social Sciences at LIT, commented. “We’re going to change our approach slightly for our spring café, in that it will be based on groups of people talking together. Other themes we’re going to explore in future Death Café events include food, music, funeral choices, afterlives, and multicultural aspects of death – I think there’s lots to talk about and consider for people.”

This Death Café Limerick event takes place at the end of a day-long symposium on “Death, Disease and Design” organised by the Academy research collective at Limerick School of Art and Design. The symposium, which is open to the public, will explore applications of creative arts to ill health, chronic illness and the end of life. Presenters include members of Academy at LSAD, Arts and Health, Tallaght Hospital, the Loss and Grief Research Group at LIT, The Irish World Academy at UL, Health Futures Lab, Design Factors at UL, and DesignCORE at IT Carlow.

The global Death Café movement began in 2010 and was inspired by Swiss sociologist Bernard Crettaz. Death Cafes create opportunities for people to meet in facilitated groups and talk informally about death with a view to helping people make the most of their finite lives. Close to 3,000 different Death Café events have taken place worldwide in countries such as France, Australia, New Zealand, the United Kingdom, Ireland and the USA. Death Café Limerick is the first of its kind in the greater Munster region.

Contact Dr. Tracy Fahey at [email protected] for more info on the symposium.