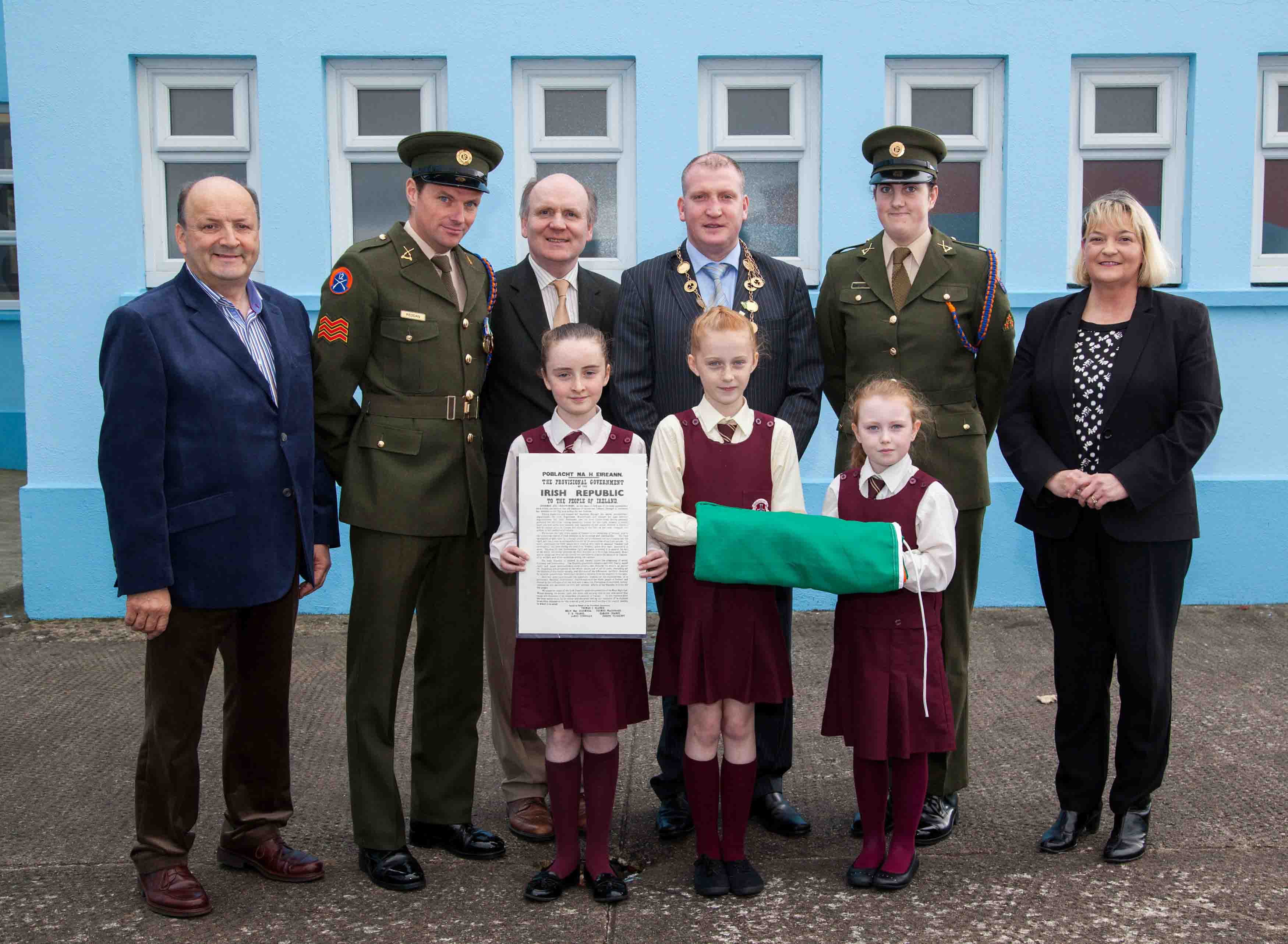 Members of the Defence Forces presented a handmade tricolour to Limerick schools recently in Abbeyfeale, along with a copy of the Proclamation of the Irish Republic to students of the town’s two primary schools.

St Marys Boys National School and Scoil Mháthair Dé are among 3,200 schools nationally and 152 Limerick primary schools to receive the presentation as part of initiatives to mark the centenary of the 1916 Rising.

Councillor Liam Galvin, Mayor of the City and County of Limerick joined pupils and teachers for today’s presentation ceremony, which saw representatives of the Defence Forces raise the flag and read the Proclamation.

Background information on the symbolism of the Tricolour and the etiquette attached to its display and storage was also provided while a commemorative pack containing a copy of Amhrán na bhFiann amongst other items was presented to both schools.

Mayor Galvin said: “This is a wonderful initiative that will help raise awareness amongst young people of the origins of the Republic and the ideals, struggles and personalities behind its foundation.”

Mayor Galvin also welcomed the open invitation that has been issued by Government to all students to write a new proclamation.

“By asking young people to write a new proclamation, this initiative is seeking to reflect the hopes and aspirations of their generation. I also welcome the fact that students are being encouraged to research their own family history over the past century and see what their ancestors were doing around the time of the Rising. The initiative will culminate with a dedicated Proclamation Day in all schools on 15 March next year,” he added.

Earlier this month Mayor Galvin joined Damien Brady, 2016 Co-ordinator for Limerick City & County Council, in presenting the Taoiseach, Mr. Enda Kenny with a copy of the Limerick Plan for the 2016 Commemorations at the national launch in Kilmainham Hospital.

Among the planned events and initiatives taking place in Limerick is a re-enactment of the march by 300 Volunteers to Glenquin Castle on Easter Sunday 1916, an exhibition of tapestries based on the theme of 1916 in Friarsgate Theatre, a series of public lectures on 1916 in the new Local Studies Department at the Granary and a special concert at the University of Limerick in May 2016. Iarnród Eireann also will be unveiling a panel at Colbert Station in 2016 with a specially commissioned portrait of Con Colbert.

Damien Brady, 2016 Co-ordinator for Limerick City & County Council, commented: “This programme of events that has been developed for Limerick next year is complemented by a number of other initiatives being rolled out around the country. We are delighted to have put together a programme which we feel is comprehensive in its summary of events 100 years ago and how Limerick and the rest of the country has been impacted in the decades since.”

Limerick has many important links with the 1916 Rising, Two of the sixteen leaders executed after the Rising were Limerick men, namely Con Colbert and Edward Daly. Eamonn De Valera, raised in Bruree, Co. Limerick, also played a significant role and was a leader in ‘Bolands Mill’.

Kathleen Clarke (nee Daly) was a founding member of Cumann na mBan and she set up the Prisoners’ Dependants Fund immediately after the Rising. Meanwhile, Dr. Richard Hayes fought in the Rising, seeing action with Thomas Ashe at Ashbourne, Co. Meath. He was arrested and imprisoned in England.