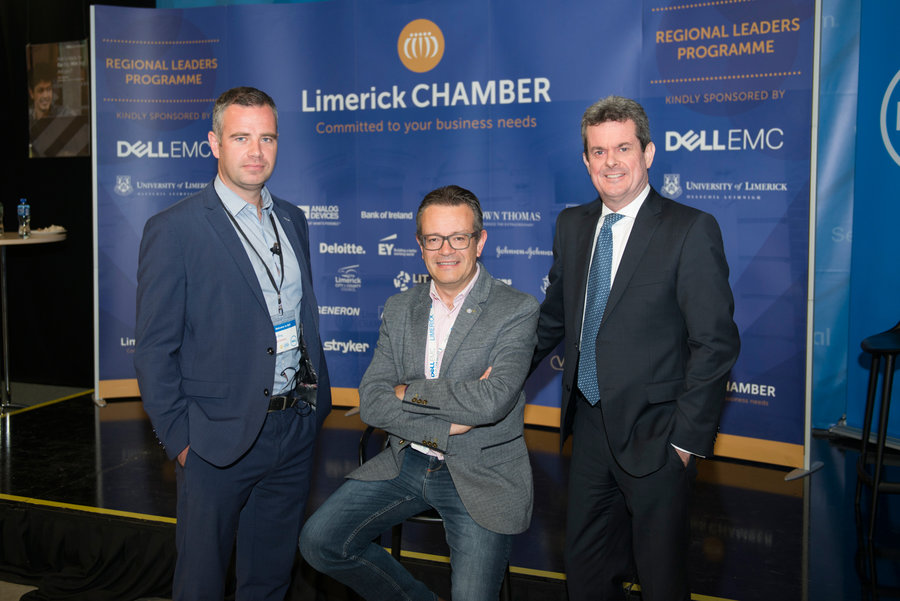 Members of the Mid-West business community have taken part in their third Dell EMC Limerick Leadership Talks at the Dell EMC campus in Limerick as part of the Limerick Chamber Regional Leaders’ Programme. The programme is being delivered by Limerick Chamber in collaboration with Dell EMC and the University of Limerick. The third talk in the series was delivered by Fergal O’Rourke, Managing Partner, PWC.

Launched in January, the programme has now hosted three leadership discussions at the Dell EMC campus in Limerick and a number of mentor sessions have taken place over the past six months. The programme has 150 participants from across the Mid-West business community signed up and all have deemed the programme a success so far.

Feargal O’Rourke is Managing Partner at PwC Ireland and heads up the company’s Irish Leadership Team. He is also a member of the firm’s EMEA Leadership Team. Previously, Feargal was Head of the firm’s Tax practice and has been a Partner since 1996. He is a Fellow of the Institute of Chartered Accountants in Ireland, an Associate of the Irish Tax Institute and a graduate of University College Dublin.

Addressing the audience, O’Rourke said: “I’m delighted to be with you all this afternoon. I think this is a great initiative being run by Limerick Chamber with the support of Dell EMC and the University of Limerick. Over my years in business I’ve come across many leadership styles – some I’ve responded better to than others. Along the way, I’ve picked up the elements I’ve liked the most and I try to be the style of leader that brings people along with them on a journey, listening to employees and colleagues, taking it all on board as outputs are considered. So my advice is strongly to become the person you’ve responded to the most. Think about it yourself – who have you worked hardest for, what manager motivated you the most. It’s the style of leadership that motivates a team to achieve more that will ultimately be successful.”

Mr. O’Rourke delivered an hour-long talk to the attendees with an open questions and answers session at the end.

Speaking about the Leaders Programme Timmy O’Dwyer, Vice President, Global Parts Operations and Limerick Site Leader for Dell EMC: “Dell EMC is delighted to be working with Limerick Chamber and the University of Limerick on this exciting programme to support the growth and development ambitions of the mid-west region. The success of the initiative has been great to see. As we reach the midway point it’s encouraging to see so many participants actively engaged. I believe initiatives like these will become increasingly important as we develop new business leaders and attract continued investment into the region.”

Dr. James Ring, CEO, Limerick Chamber, said: “The Regional Leaders’ Programme, with the support of Dell EMC and the University of Limerick, has been a huge success to date. We’re at the mid-way point now with two talks remaining. Over the summer period, a number of mentor sessions will take place and we’ll regroup in September for our next leadership session.”

The next leadership talk is scheduled for September and will be delivered by Aongus Hegarty, President for Dell EMC in Europe, Middle East, and Africa.

To see more of our stories on Dell EMC click here